Got up *late* today. Got the car jumped by the realtors and had to turn down an offer to go playing with them because they were going to get back after dinner and we had plans with Helen for dinner. We went driving and bought some gas. Also went and parked near the university and had lunch and bought some coffee for Jeremy. Then we bought some dessert for Jeremy’s birthday and headed home. Spent some stressful hours working on our expense report and then Helen called and said she had just come home from Tai-Chung and wanted to rest before coming over, so we went shopping just the three of us. We headed back home without finding black bean paste, but our security guard, Mr. Hong found other tenents in the building who had some for us! Then Helen came over and we played for hours. It was fun. She seemed surprised that Jeremy was 34. She thought he was 40 at least. Hee hee, she didn’t realize that Jeremy was only 2 years older than her. Vince *loves* Helen. Stayed up late and smiled and smiled at her. She’s teaching Jeremy how to cook lots and lots of dishes. 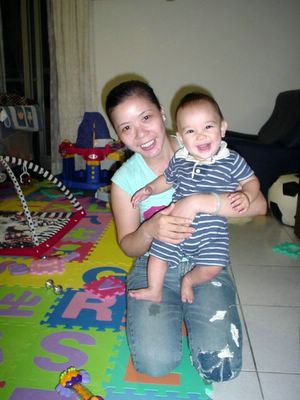