Yesterday, we went to Marfa to see the hotel that the crew of “Giant” were staying. Then we went to Big Bend National Park. Yesterday, we stayed at Ft. Stockton. Today, we are heading to Houston and will stay in our classmate’s house for 2 days before heading back to Las Vegas.

On Wed morning, Martin picked up Vince to go to school and then Jeremy and I enjoyed a little web-cam action (!) and I packed and packed and got ready to spend the night at KiKi and Capa’s house. I ran with Edda to the gym and did a BodyPUMP class, which is incredibly difficult and then picked up Vince from Bright Horizons.

Then we went to McDonald’s where they are giving away really lame stuffed dogs as the prizes in the Happy Meal. I did cave in and eat an extremly delicious Big Mac, I’ve been eating very lightly all week and after 2 days of aerobics I was needing some beef. I have to buy 2 happy meals these days as Edda eats her fair share of French Fries.

Then we got to Bard and waited for Josh and Jared to come over. They are cousins who live in Woodstock. Josh is a funny, funny man. During the years from 1994-1997, he was an extremely successful musician in Europe. I mean a record label with EMI, 3 number 1 albums, girls throwing underwear at him, limos and posh hotels, etc, etc. He had recorded a dance song for somebody and it became really, really popular. But he really is a blues, jazz kind-of guy. So it came and went and now he lives in Woodstock with his mom who has dementia and he has a charming 5-year-old boy named Jared who loves bikes.

We had pizza and we stayed over. On thursday, I went to the Rhinebeck hospital where their weekly playgroup occurs on Thurs mornings, we went and had a pretty good time. Went back to Bard for lunch with the in-laws and then home. Bob and Katherine are going to be gone for the weekend, so I have 4 children by myself tonight (Trudy, Ruby, Vince and Edda) and unfortunatly, Ruby has the runs. Smelly.

We had a playdate with Sammy and they have 2 TVs and TiVo! Hooray! I got to watch Oprah today. It featured a lady who is in jail for running over her husband after she found out he was having an affair. 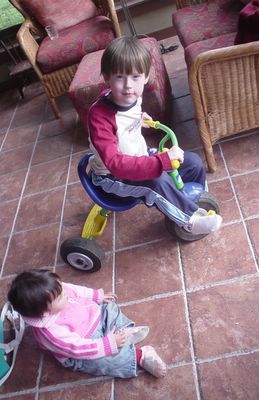 Jared and Edda in the sunroom at Bard.

Well, we are going to see Carlsbad cavern today and the Big Bend National Park tomorrow and heading Austin, TX. Anyone know where is the Lyndon Johnson Library is? And the place where the motion picture of “Giant” was filmed.

We went to the White Sand National Park and will go to Roswell, Carlsbad, NM tomorrow.

Vince told me today that he liked going to Chinatown. I asked when did he go to Chinatown, he replied, “In ’68”. Who knew?

We went to the gym in the morning. I danced and jumped my way through a tough aerobics workout. Vince had his parachute time and Edda had a tough time in the day care center. She’s still little bit scared and worried that I’m not there. I saw Lora, who was taking Erica for her swim lesson. In the afternoon, we went to the library and the kick-ass playground right next to it. I had a dinner of frozen burritos. We kept buying these frozen burritos and they are a flavor i do not like and now I have about 7 of them, so I vowed to myself that I would finish them before Jeremy got back. 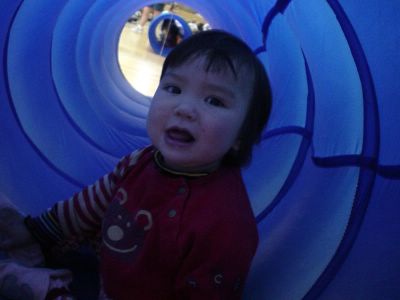 Edda in her blue tunnel.