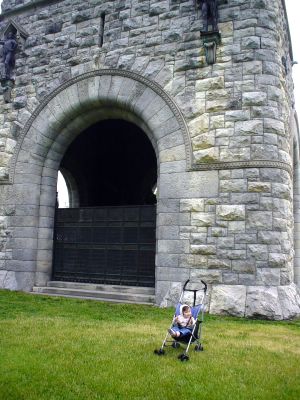 From April 1782 to August 1783, General George Washington, commander in chief of the Continental Army, made his military headquarters and residence at the Hasbrouck family’s fieldstone farmhouse in Newburgh. Washington’s Headquarters is located 12 miles north of the forts at West Point.

The Hasbrouck property, acquired and opened by the State of New York in 1850, was the first publicly operated historic site in the United States. Today, museum exhibits of artifacts recall the events during 1782-83, when Washington’s army stood ready for battle until the final days of the Revolution. In the Hasbrouck house, furnishings, personal effects, and reproductions recreate the daily lives of the general, his wife, his officers, slaves, and servants during their 16-1/2-month stay.