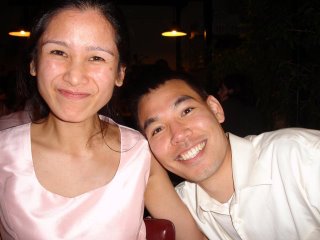 Yesterday was Joy and Phil’s weddding day. Joy and I go way back to the first week of MIT. We’ve always been really good friends since I was her caretaker for freshman year. Everytime Joy had an accident or mishap – which was frequent – I was around to help her out.

It all started Friday night as we went to Doris and Jeremy’s favorite pennisula Thai restaurant – the Amarin Thai. They had an outdoor seating area in the rear to seat 50-60 people that I never knew of before. Of course, a whole bunch of friends from MIT came by to celebrate. Fenney and her fiance Sanh. Heidi and her fiance, Hiway, and another McCormick alum, Susan. I’m the closest to Fenney, who, very ironically lives in Bethesda now, and works as an OB/Gyn in Holy Cross hospital where I was born.

Joy never liked any of her friends from separate groups mingling and sharing stories about her. So this was the first time that her college friends and her med school friends could gossip about her. Basically she was a total prude at MIT and went wild partying at Stanford. Laff.

The wedding was at Stanford Memorial. Everything started on the dot like clockwork, cause, of course, there was another wedding party waiting in the wings. Joy had a crazy designer dress that would drag on the floor, so she had to take 2 steps and then kick her dress to get anywhere down the isle. She also wore the largest smile I’ve ever seen on her face as she came down with her father. The ceremony itself was okay. lots of god and singing, which i found ironic since neither of them are religious. but whatever.

At about 1, we all went off to the Joy Luck Place in San Mateo for the banquet. It’s probably the best meal I’ve had at the Joy Luck. There was this lobster dish with a garlic black bean sauce that was to die for. The highlight of the evening was Joy and Phil’s two costume changes. One into traditional Korean garb (he’s Korean) and another time into tradition thai garb (joy is Thai). Amazing really. I’ll try to dig up some photos.

Afterwards, we took a nap in the afternoon, changed and went to the Poleng Lounge in SF to hang out. I had never seen Joy drink in my life, and so, I did my best to get her trashed. Laff. I had 4 drinks myself – an apple martini, a fuzzy navel, a mind eraser (?), and a lemon drop. Yeah all girlie drinks I know, but what can I say? I’m a woman. It was probably the most buzzed I’ve been in a long time. It’s been awhile since I’ve been out to bar like that with loud music. We all were hoarse afterwards, but it was still a lot of fun. 🙂

2 thoughts on “Congratulations Joy and Phil!”