It was a good, but tiring weekend in LA. I drove down Thursday night and got to Ted’s place at around 1am. I found him and his roommate, James, playing Gears of War on Xbox 360, so of course I had to play for an hour or 2. Ted and I ended up talking a bit too – didn’t sleep until about 4am.

Friday, I woke up late, Ted had to get his new stereo install at the very same Circuit City that I had tried to buy Mom her original iPod nano. Anyways, they messed up the install, and now the stereo whines when the car revs. Grounding problem? New Amp? Dunno. But we went to the Circuit City no less than 3 times this weekend. 🙂

We hung out a bit with Nolan and Huong. They are always really good hosts to me. Never can seem to pay for my own dinner when we go out to eat. So thanks Nolan. Also Nolan was the keeper for my old Klein Attitude hardtail, affectionately known as, Bluesy. I got it back from him considering Nolan now has at least.. 5-10 bikes in his stable. 🙂 Well, now I’ve got 5 bikes in my stable, that I’m not quite sure what to do with, but we’ll think of something.

We did some time trialing also. This is good cause I signed up to to the time trialing portion of the Wildflower Tri with Yi-Ling and her friend Meera. 56 miles, racing. Yikes. Our team name? GunningForNotLast. 🙂 Ted and I raced on the way out to determine our handicap, and then raced on the way back, with Ted starting ahead of me based on the handicap. He beat me by 30 seconds… grrrr..

Also I went to catch a one-woman show. It was Carrie Fisher’s Wishful Drinking. Basically a satire on how fucked up her life was, and it was pretty fucked up. 🙂 Best line of the night: “Dating your Ex is like the victory of hope, over experience.” 🙂 Oh yes, I forgot to say that I had my first celebrity spotting in LA. Leonard Maltin was not only at the play, but he also ate at the same pizza joint that Ted and I went to before the show. ha ha!

Not a lot of pics from the weekend, Here’s some of us hanging out in Old Pas. Ted, you’ve got a good eye, you should take up photography.

Oh yeah, also more confirmation that my Orange Jacket is cool. a random stranger came up to me at Ralph’s and told me that she liked my jacket. 🙂 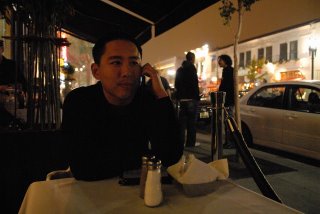 Ted hanging out at Mi Piace. 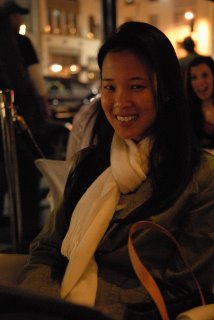