Last Night we had a surprise birthday party for Choon! Details to follow when I have time, but some photos. Enjoy!

So it was Tuesday Night. Choon and PS were off dropping Joe at the airport. They left their house around 8:45ish? I snuck in thru the side door and was the first one there at 9:15. And so while bored, I proceded to set the high score on Choon’s Bot It Extreme. (Too bad they use an 8 bit counter so the high score only goes up to 250. (Yes an 8 bit counter goes to 255, but that’s just a weird number to end at for non-CS people)) Ha. Everyone soon came in afterwards. We piled into the new office of Choon’s startup waiting for them to come home.

We got a bit of a warning, but Xin barely made it out of the bathroom before Choon opened the door. Unfortunately, Choon, instead of walking to the rear of the house where we were, he decided to walk towards the front, and while turning out the lights he noticed all our shoes on the back porch. 🙂 And then the gig was up! I don’t know why we didn’t just rush him to begin with, and I’m surprised that he didn’t hear us in the back room. We were whispering really loudly.

Laff. Lynn provided the cakes – a chocolate vegan and the better one, the tiramisu cake with lady fingers. Also instead of candles, we used the illegally imported british sparklers. Who knew Zaniab was in the smuggling business.

Some of the photos below are Lynn’s. I gave her a quick lesson in apeture and depth of field. Wheeee! 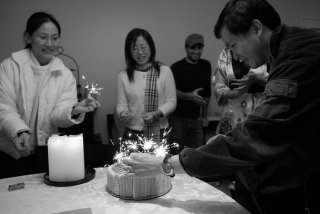 Sparklers instead of Candles. Go Brits! 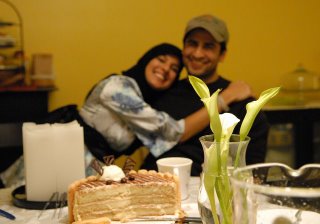 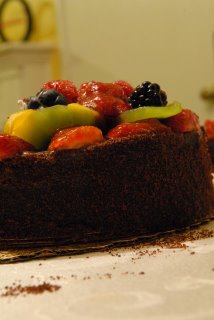 YA Lynn’s. She’s learning to be a pro now. 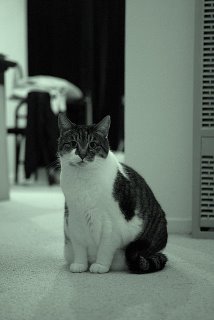