Lol. Flight got cancelled so looks like we are spending one more evening in Japan. Here’s a photo of a 747-full of irate people ready to yell at some very poor, poor customer service reps who – no doubt – had to roused from their homes to come to the (now closed) airport. 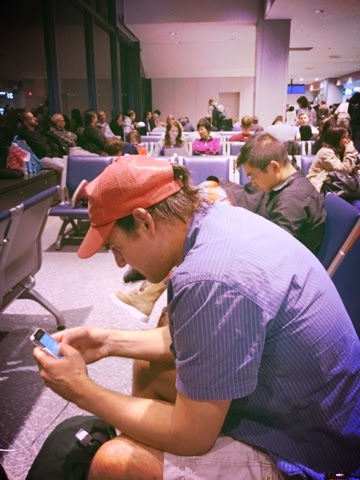 Since there’s nothing for me to do, I’m writing this blog post. 🙂 But, the woman sitting across from me is in a major bitch-fest mood right now. The kid to the left of me is watching a minecraft video on his iPad. I am reminded of Vince.
Tokyo has mostly been a food/shopping trip. We’ve had some very fun, crazy and expensive meals here. We’ve had three sushi meals – Sushi Dai, Harutaka and Masa.
Sushi Dai was the best value and a fun atmosphere, but it had the downside of being in the tsukiji fish market and required a 2.25 hour wait for a $40 meal.  I believe I found my new favorite cut of sushi – semi fatty tuna. OMG.
Harutaka was your traditional, stuffy sushi bar. Very old school. Lawrence felt like he was being judged.
The last one was Masa, which Lawrence’s cousin, Richard, loves to go to. He’s a fun inventive guy and  we blew thru no less than 25 rounds of omakase. Also, he’s very accommodating to foreigners and allows photos to be taken (some places do not). Also, he’s served us some stuff that I have never tried before – things like the connecting tissue between the shell and meaty part of very large large scallops. This was a dish.
Here is a photo of his prepping o-toro, the fattiest slice of tuna. He cuts it very thinly and serves three slices layered with wasabi. This is because having one continuos piece of o-toro, is too much fat for the palette, so hence, the layering. 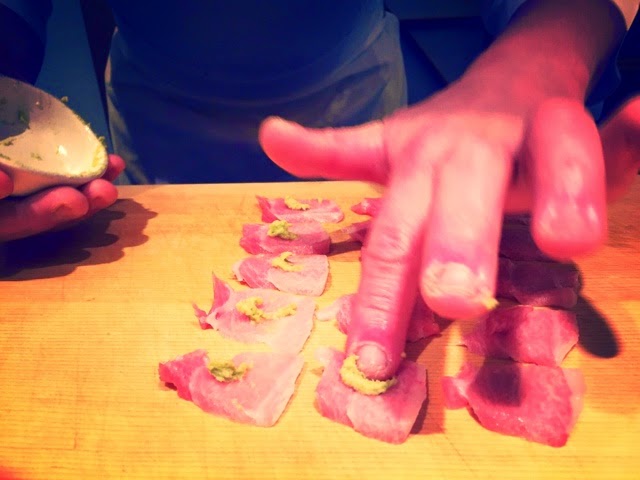 One thought on “Stuck in Japan.”