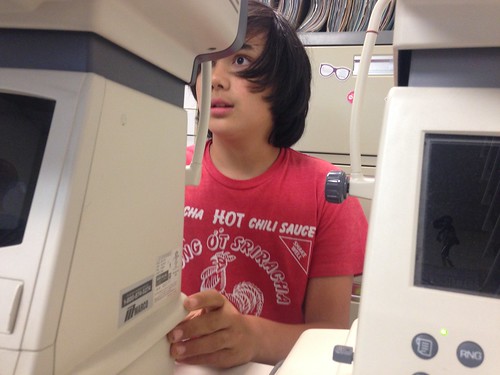 Shall we continue to float down the vein of medical updates?  Two months ago, I took Vince to have his eyes checked for glasses and his eyes measured high for pressure.  What does that mean?  Oh, just early blindness – no biggie.  Or it could be nothing!  Some people just run high forever.  So the doc suggested we come in two months later to have his eyes remeasured.  Yesterday (which is two months later) we made it in to have the pressure remeasured, everything is OK – smack dab in the middle of the range.  So then I ask, do I come in again in two months?  Nah – bring him back in a year.   Hmmm…  how do I know that yesterday’s measurements were any more accurate than the ones two months ago?   I’m spinning myself in a medical conundrum circle.  At least Vince got many compliments for the t-shirt.

Edda’s Lyme-bullseye-rash is dissipating under the spell of antibiotics.  A relief.

What else is going on?  NOTHING.  Absolutely nothing.  Just turn around, nothing interesting here to see.

One thought on “Eye exam.”