We are having a bit of a rough time readjusting back to Rockville time.  I was worried that I would spend a lot of time jet lagged in Italy, but I shouldn’t have worried about that, I should have worried about this week back in my own house.  Edda is still crashing early and getting up for good at 3 am.  I’ve been sleepy at odd times (which has meant a slowish ramp-up to my regular working-at-work speed) and I’ve been fighting a lingering cough for at least 5 days now (which in my pessimistic mind means I have TB because I have to go next week to get my annual TB test for nursing school).

Also, I had a terrible stomach bug – which instead of the usual 24-hour variety – I got the 2-hour variety last night.  That whole intestinal debacle ended up with me sleeping in the bathtub at from 3-4:30 am (somehow the coolness of the tub was a relief), but I felt well enough today to eat all my meals and hold on to them.  That terrible stomach bug was so short that I almost think I dreamed the whole thing.  But Edda caught it and got sent home from camp today (they showered her twice within 5 hours).  Poor Edda.  Poor camp counselor.

It’s quiet in the house without Vince.  I hope he doesn’t have this stomach bug.  I haven’t heard a peep from him, he’s out of cell range and anyways, I think they ban electronics at scout camp.

This selfie he took?  He looks like he’s 25 years old. 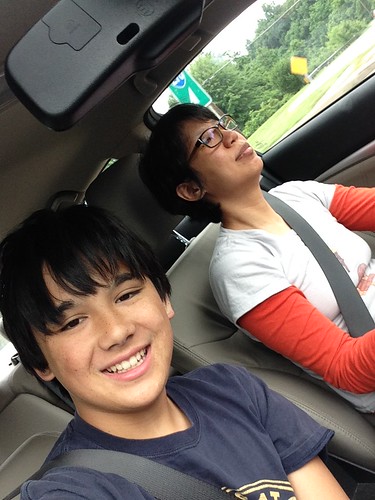 One thought on “and the week goes on…”