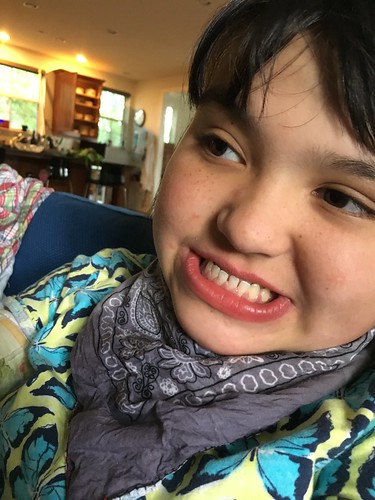 It is now the last day before the boys get back from NM.  I made it through the week in pretty good cheer, but the last day is always tough for me.  I rely on my boys for steady optimism (Jeremy) and steady socializing (Vincent), without them, I can be a sad hermit.

When I was in high school I, quickly, over about 6-12 months, lost about half of the hairs on my head.  My luxurious head of jet black straight hair dwindled, the diameter of my ponytail got smaller and smaller.  Every shower I saw a large clump of hairs collecting in the drain.  I was/am never (never!) one for caring much about my looks, but this hair loss made me distraught for a long time.  I will not be above admitting that, over the past decade, after letting go the incredibly unreasonable desires I had for Edda (first female president, Olympic gold medalist, savvy billionaire entrepreneur, solo-eureka-cancer-eradicator), the high reasonable desires (high school musical, college degree, nice husband/spouse, fulfilling career, a family of her own), the low reasonable desires (enjoying a joke, telling a secret to a friend, learning Avogadro’s number, baking a cake, taking the dog for a walk) and the things I didn’t even consider desires when I was pregnant (the ability to speak/eat/dress/go to the bathroom by oneself), that I sent up prayers to the powers that be to have it arranged so that she didn’t inherit my hair loss – that at least when people walk up to her, that they can always say – Edda!  You have such beautiful hair!  (Which is what they all say – just so you know.)

But I think the powers that be didn’t hear me – I think Edda is losing her hair.  There have been hairs collecting in the shower drain for a few months now, and today!  Of course today – the day before the boys get home, I really pay attention – I pull on her hair the same way I did when I was 15 and I see the same number of strands pull from her scalp in the same way mine did three decades ago.  And this is what brings me to the ground today – not the scoliosis which is progressing despite the brace, nor the turned out foot that threatens to deform so much and put the ankle bone on the ground, and not the advancing stiffness that pervades her body that makes it hard to bend at the waist to sit in her wheelchair or to lift her arms above her head to put on a shirt or to bring her legs into the footwell of the car – I fixate on the few strands of hair on the bathroom floor.