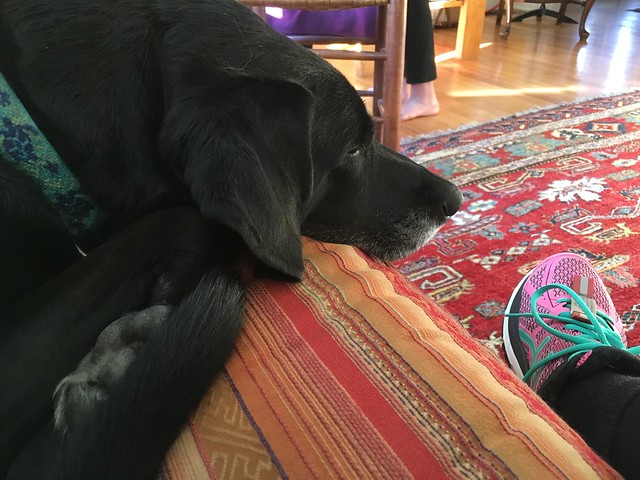 I didn’t take any photos today – so you get a photo of Max at Bard a few weekends ago.  I left a pork tenderloin defrosting on the kitchen counter the other day and in the middle of the afternoon, I found the loin, still in its plastic casing, in the middle of the living room floor.  Maxi had pulled it off the counter and had managed to chew a hole in the loin packaging and had started to gnaw on the raw meat.  But then she decided she didn’t like it and left it on the floor.  What kind of crazy dog doesn’t like raw meat?  I rinsed it off and let it finish defrosting a little further in from the edge of the kitchen counter.  Jeremy came home later and  made it into Chinese stir-fry.  I didn’t tell him the story until after we’d finished eating dinner.

Jeremy worked from home today.  He’s home until after the new year.  I do love having him at home; especially now that he can use the guest room as his home office.  It means that he’s near, but not super near (like 3 feet away).

Vince had a tough week at school.  A test (or 2!) in every subject and papers galore.  He made it through and is now eager for the final pep rally tomorrow afternoon and then a week where I don’t pester him too much about schoolwork.

Edda does have some camp next week in the afternoons.  Jermey has the whole week off.  I haven’t taken any vacation days, but I think maybe I should?  I’m not sure what to do when we have a staycation.   We tend to err on the side of too much winging-it and not enough planning and then we end up slightly grumpy at each other.  How much work can I reasonably get done and how much time do I want to spend just hanging out?  A delicate balance that I need to figure out.