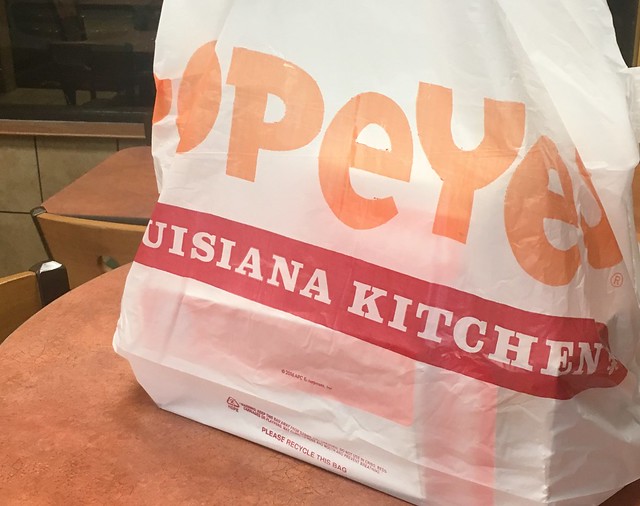 Vince has been working “hell week” at school.  He’s working the lights for the fall musical – The Little Mermaid and opening night is Friday! The kids have to stay in the auditorium and not leave until about 9 pm at night.  Knowing this, some clever parent coordinated a bulk take out enterprise and they they had a chance to pre-order dinner.  Not wanting to make it super easy for me, Vince and his pals decided that the pre-ordered dinners were lame and that Sam’s mom got better, tastier dinners.  And then, was I really going to let Sam’s mom feed Vince all week?  No.  So that meant that today at about 5 pm, I got an order for a 12 piece family meal from Popeye’s.  (With a smoochie emoji.) It was more expensive than I thought it would be – almost $33 – and I thought it was too much food for the three boys who had eschewed the pre-ordered meals and were in it together to wrangle their mothers to become food delivery couriers.  But I delivered it and some of it came back to the house!  Jeremy had a piece and said, damn!  that is some good chicken.  (OK, maybe he didn’t say damn…)

Vince had two babysitting gigs this past weekend netting him a total of $90. One required driving and we were in Philly, so he took a Lyft.  He doesn’t like using Lyft, it makes him nervous – he said that his heart was pounding while he was waiting for the car.  We subsidized the Lyft ride, and he might have given me a hug for thanks.

One thought on “Popeyes, babysitting, Virginia.”