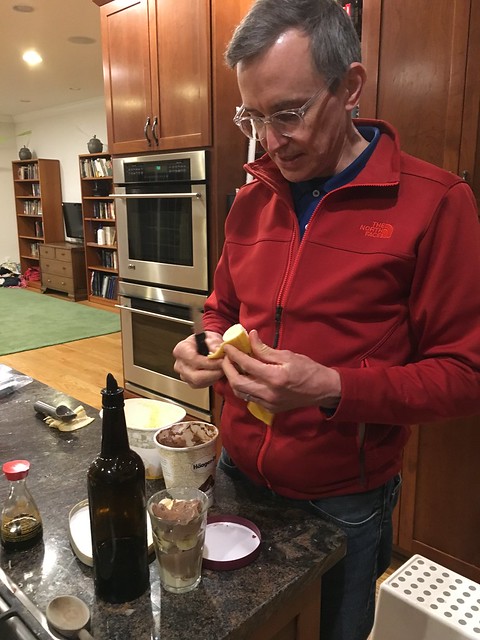 Jeremy arrived back home last night, he took the shuttle from the BWI airport to Shady Grove metro where I picked him up.  He’s been working diligently to get down to racing weight (150 lbs) for his biking season (though he came home and ate a bunch of ice cream as noted above).  Honestly, I was a little shocked how thin he was when he was striding through the parking lot towards the minivan pulling his wheeled luggage behind him.  I think this is the thinnest he’s been since I’ve known him and he was quite thin in 1994-95 when we first met.  I was worried that he was getting too thin and we talked about it as we were falling asleep last night – looking up weights of professional cyclists (of course, all much lighter than him) and also looking up BMI for his height.  According to the BMI charts, for him to still be totally within the normal range for his height but at the low end, he could be 129 lbs which is just unimaginable to either of us.  That’s pretty much what I weigh right now, but I’m 8 inches shorter than he is.  I’m actually at the high end of the BMI range for my height. For me to be in the middle of the BMI range for my height, I’d have to drop about 15-20 pounds which would land me at 110-112 pound which is so, so, so light for me.  I wasn’t even that light at the height of my grief about Edda’s diagnosis where I basically stopped eating for a good while there.  I looked fantastic (I did get compliments at that weight), but I felt terrible.  Oh so terrible.

It’s nice to have Jeremy back for many reasons, but it’s just helpful for it to not just be me and Vince interacting in the house.  With Jeremy gone, I begin to focus too much on Vince and I get attached to having things done certain ways and I can’t let go that easily.  It could be as simple as getting frustrated at him for misplacing a piece of clothing or a homework assignment or him answering my questions in a curt manner.  (As a side note, Jeremy thinks I need to go back to school just so I have my own gig again and stop paying so much attention to the boys (J & V) – I do see some valid points in Jeremy’s plan.)  I mentioned this to Vince and he said, well, what about Edda?  She’s here the whole time and part of the deal, no?  I said that Edda was on a much higher plane than the rest of us, probably always floating at the self-actualization level while the rest of us (ok, me or I or whatever pronoun I should use) tumble up and down Maslow’s hierarchy and behave badly.  So I will try to let it go, let it go.  Sigh.  As another side note, Edda finally likes Frozen.  It took a long time, though she likes the beginning more than the end because she’s seen the beginning more often.