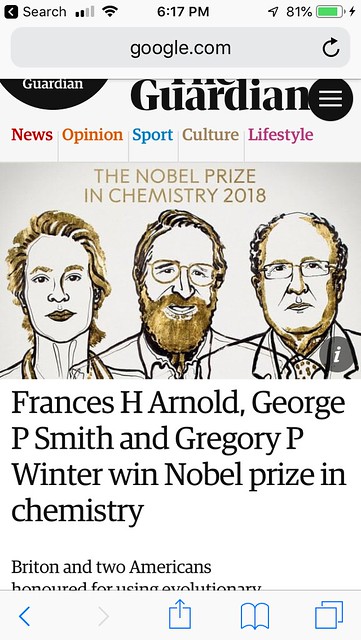 Wowza.  Fr*nces won the Nob*l Prize.  Not only did she win the Nob*l Prize, but I was a grad student in the lab at the time when she was first developing the idea/technique that would win her the award.  Many, many group meetings where I listened to directed evol*tion mini-lectures.  I often was unhappy at those meetings, I knew then that I wasn’t supposed to be in graduate school, but I was not sure where I should be instead.  I often wished Franc*s would serve cookies at the group meetings (which I think were scheduled every Friday afternoons).  I guess I would have liked to have known then that this would happen now because maybe I would have been more, uh, attentive? grateful? aggressive with my pipetting? or ambitious and less depressed, angry and lonely.  I was only depressed, angry and lonely at the science.  I was falling in love with Jeremy which was fabulous, so it was a dichotomous experience.  (I did not work on the Nob*l Prize winning research, I worked with Vidya on another project, which ultimately failed, but sealed my friendship with Vidya, which, in my opinion overall was a good trade).

Tied with this news about Franc*s is a backwards look at the trajectory of my scientific career.  Each time there is an news article about how women are not represented in science or in the boardrooms, how to encourage confidence in young girls regarding STEM, how to make science interesting, blah, blah, blah, I feel often, that I’ve failed in my life’s mission.  That I was given such a strong push and encouragement – my mother, the only female engineering student in her class in college, my college senior thesis advisor, the first female tenured in our department, and now my graduate advisor who won the Nob*l Prize (5th women in Chemistry!) and I married into a family who knows all the ins/outs of academic life and finally, Jeremy, who, if I had told him early on I wanted to make a go of it at an R1 university or run a large company, would have said, yeah – go for it, I will support you 100%.  There was really nothing stopping me except whatever limitations I had placed upon myself.  Why didn’t I do it?  Why am I doing what I’m doing?  Often I think what I’m doing is lame, that I didn’t live up to my potential and all the opportunities that were offered to me.

I still struggle with helping Vince with his physics homework.  At least it’s motion, once you get into e & m, I’m toast. 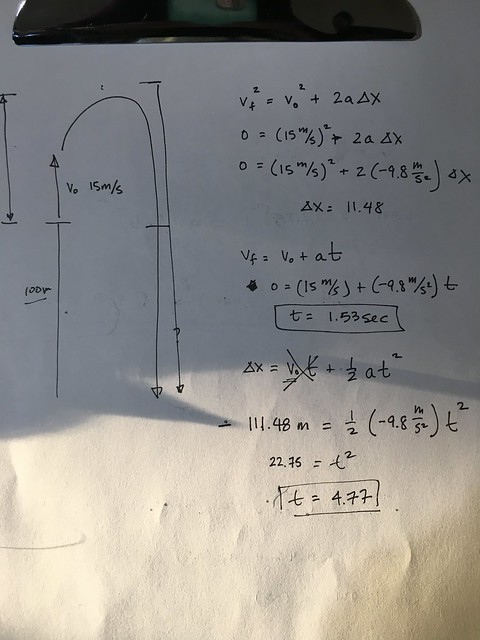