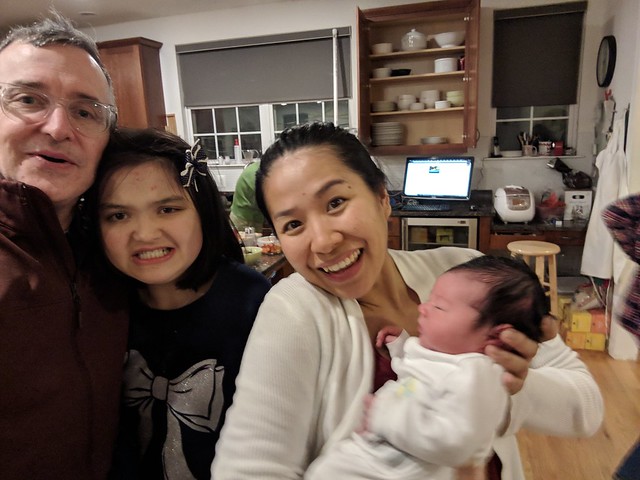 We are trying to figure out a new look for Edda.  For her whole life, we’ve bought her Hanna Andersson clothing which are beautiful, but really trap her in the early elementary school look.  Not a terrible thing, for sure, but now we are looking for an older, more grown up look.  I think we are skipping all the teen stores and going straight to Uniqlo.  We ordered a bunch of camisoles with the built in bras and some stretchy turtlenecks. For a little while I tried to walk into the popular teen stores and buy outfits for Edda, but I generally disapprove of those stores and I can’t bear to spend $ there, so there is that.

The first quarter of junior year is done for Vince.  He did well, but he did not get straight As – this included a B in AP Physics.  My plan for letting Vince live his own life is working well, I spent only 45 minutes fretting about his physics grade since September (ok, maybe 90 minutes).  If I wasn’t learning to be a nurse, I’m sure I would have spent days obsessed about this and tried to make him cram physics into his head in various unpleasant ways.   We were driving home from school one day last week talking about his physics grade and I told him I was less busy now for the next quarter (in the sense that I don’t feel like throwing up everyday I go to the hospital) and I more available to helping him with it and that Jeremy was always open to helping him out, but he said – well while you both arrive at the same correct answer there are pros and cons to asking either of you. Dad is always very nice about helping out, but he explains it in a convoluted and confusing way and you are always initially judg-y about it, but your explanations are clear and to the point.  I sighed and said, you ever use Kahn Academy?  They are pretty clear without the judg-y part.  And then I said I’d work on being less judg-y (Which I’m always working on.  Always,  Not just to Vince, but to the whole world).  I’m not sure Jeremy could work on being less complicated.  This Harvard/Asian-American case has also helped me let go of a lot of college admissions angst.  While I’m staunchly pro-affirmative action, Harvard’s admissions procedures have really felt like a personal attack on me, so I often feel like – screw Harvard and all those fancy private schools.  There will be no private school going for any of my offspring.  They can have all the Squis that they want, they obviously don’t want me and I don’t need them.  There is a lot of work to do and none of it requires a degree from Harvard.  Then I tell Jeremy – Vince is going to a large, publicly funded state school and then Jeremy looks at me and is like, huh?  What is going on? (I can swing wildly on this topic.  It is shameful for me to admit that of all the crappy things that have happened, #metoo, children ripped from their family, etc, etc, I’m can focus on this Harvard case a lot and then I berate myself, because really?  am I going to feel bad about who is going to drive the Porsche when everyone has rusty tricycles to go to work/school?)  Maybe it’s all sour grapes as Vince is obviously not as obsessed about school as I was and I often I think more power to him (though just as often, I’m like why are you not studying every minute you are awake?).  Unlike me at 16, I’m sure I could drop him in the middle of a foreign country, not speaking the language and with no money or phone and I’m sure within 24 hours, he’d find a nice, non-freaky friend and a non-freaky place to sleep and a way to call us/text us and tell us that he’s OK and if he can travel for a bit with his friend and don’t worry about the $, he’ll figure out a way to find a job to pay for the travel.  (As an aside, I loved the affirmative action episode of Patriot Act with Hasan Minhaj where the best quote was “Our entire live we get shat on — oh, you guys have small dicks; you’re bad drivers; you’re the color of poop; you smell like curry and kimchi. Nothing. We say nothing. The moment we can’t get into Harvard, we’re like, ‘I’ll see you in court, motherfucker!'”).

To be really excellent at my hospital gig, I think I’d need to become fluent in Spanish.  I took French in high school and I often wish that I had taken Spanish instead because at least I’d have that to hang my hat on now.  I spent some time today watching TV shows in both Spanish (Cable Girls) and French (Blind Date) on Netflix with the English subtitles to kind of gauge how much of an advantage taking HS French was and I think any advantage is erase by thirty years of not thinking about anything more complicated than a croissant.  I consider my Chinese to be pretty poor (I tell people I speak like a toddler because that is pretty much when I stopped trying to learn any more), I still can’t get tenses correct.  I’ve been in situations where my spoken Chinese seems good enough and the person gets really excited (because it’s always nice to speak in your native language when you haven’t been able to communicate easily and quickly in days/weeks/whatever) and then starts speaking really quickly and then I don’t know the word for blood pressure and then I’m confused if they have taken their blood pressure medication already or if they are going to take it later or if they are asking if they should take their blood pressure medication.  I watched another Netflix TV show in Chinese (Meteor Garden) to see how fluent my Chinese is and it’s not terrible, but it’s not great either.  I think I could kind of manage without the subtitles.  If I could get my Spanish to be as good as my Chinese, I think that would be wonderful.  Actually, I’m lowering the bar, I would love to have good command of receptive language.  I would love to understand my patients.