I can’t believe it is almost the end the October. I’ve been in a good mood because I just finished reading this peppy book “bel canto” and I’ve been in a sentimental mood for a few days while reading it. But now I’m done with the book, the glow has passed. Also, I’ve also been slacking on my workouts, I skipped the last two days, that could also be contributing to my sulleness. I also remembered how I loved to listen to Terry Gross in the US and her show is online, so I listened to a few episodes today and it made me all nostalgic for home. Vince had his first meat bits, the pork inside pork buns. Work for Jeremy is going well, he’s, as he says, on an upswing.

Tonight we had dinner with Roger, our neighbor, who I once helped out with jumping his car. We had a simple spaghetti dinner. He is a lot of fun, very nice guy from W. Virginia. We talked about the military, about cans (which he helps inspects) about driving and about medical care. A lot of fun for all of us!

Today we had a slow day, recovering after our active day yesterday. We slept in, and puttered around the house. Then in the late morning we went to Neihu, the nearby harbor. We ate some seafood for lunch and flew our kite for a bit. After that, we went out in search of a park we had seen from the highway that was near our house in the floodplain of the river between Shinchu and Jubei. We had quite a tricky time figuring out how to drive there, but finally figured it out after snaking through a lot of very small streets past farms and old traditional Chinese houses. There are still quite a few farms and old houses inside of Shinchu, which surprises me. We have not been off the main roads too much, and are still surprised by what we find there. After we returned we all took a nap and did some shopping. I (Jeremy) cooked a couple simple Chinese dishes (or as close as I can manage) for dinner and then we worked on helping Doris type in Chinese so she can send email to non-English speakers.

So today was a really nice day 🙂 We started out by heading east, not knowing exactly where we were going. We ended up driving up and up into the mountains to this place called Five Finger Mountain. At this mountain was a playground for kids which was pretty cool. They had a balancing obstacle where Jeremy walked “across a river” on these two long poles with footholds which were suspended from two logs by metal rods. It’s kind of hard to explain, but he had an audience of appreciative Taiwanese to applaude for him when he was done. There was also a pully cart where kids could sit on a cart on train tracks and pull on a rope and haul themselves across a distance. There was also a seat which was suspended about 20 feet in the air with pulleys so that you could slide across for about 40 feet. But you needed a friend to help pull you back. Also the weather was perfect, it really matched my mood today. It was overcast, so when you looked up at the peaks, they were shrouded in fog. We had a lunch of noodles, chicken and green veggies at a small eatery near the mountain. I gave some of the chicken to a mangey puppy and his mommy who were hanging out at the outdoor cafe. Then we went to the Ambassador hotel and saw all of Vince’s friends. It’s been a long time since we’ve seen them, you could tell that Vince couldn’t really remember it that well anymore. Anyways we ran into Linda, the housekeeper and next week we are going to her house to learn how to cook some food! That’ll be great! We went shopping for an outfit for Vince, more than 75% off, then we headed back home. Took a break and went out for buns… then played in the ball room a bit. Rented some movies which turned out not to have English subtitles (Shaolin Soccer…) Oh well. Had a great day!

Tonight, Johannas, Man-Fai and King-sang and us went to dinner in ChuBei. We went into a pretty popular place with a cute duck on the name plate. We figured they must serve some delicious duck. Turns out they serve some weird concoction with herbal medicine in it which made the duck tough and really ditasteful. Ugh! We also had white asparagus with weird lime green sauce on it. This place has over 200 branches in Taiwan and we will *never* go there again. Blechy!

So today I wore my new low riding jeans. Pretty cool. They almost show my butt crack when I need to take out the trash 🙂 We went out to eat at a nice restaurant around the corner. Had the fried shrimp/mayo/pineapple dish. Yummier than it sounds.

Today Vincie and I spent some time in the plastic ball room of our apartment complex. Vince kept putting one ball after another in his mouth. It was all I could do to keep up with wiping them off. There were about 5 other boys in the jungle gym area all running and screaming their heads off. They all made rules about the different color balls, one was a bomb, the other needed to be thrown, etc. Vince loved it! We also saw Helen and Ms. Liu. This evening, we tried out a place across the street which is pretty much cook your own kebabs, it was OK, not terribly exciting. Then we went to Hang Ten and bought me some low rider jeans. All my old pants are too big now, but I’m still a size L in Taiwan! Hee hee

I’m slowing giving up on the notion that I have to introduce one food a day to Vince. Today he had, cheddar cheese, seaweed, buttered bread and apples. All in very small amounts. Ms. Liu fed him the dried seaweed. I was impressed, bit by bit he ate the whole 5-piece package all up!

So it turns out that they want me to teach English from 3-4 pm on Mondays. That’s when their shift changes and when most of the people can stay late or come early. It’s a bit of a time hassle for me and also I think the 10 people will be hard to teach because they are all at different levels. Jeremy is still encouraging me to do it, but I’m hesitating. Also, I drove to downtown today. Quite an adventure for me. I also drove to the port to get some salmon-type fish for dinner tonight. I wanted to make salmon and salsa, but the avacado I got was terrible. 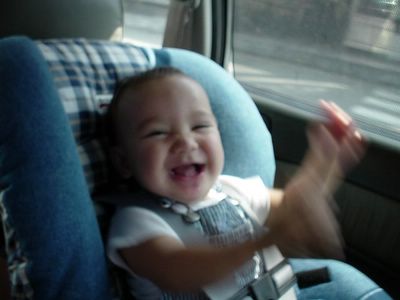