Today we came back to Hsin-Chu, officially ending our long vacation. I (Jeremy) have been at work only 2 out of the last 6 weeks, so it has been a long break. My Father and Brother are headed back to the states, my Mother left for Ghana to build a middle school a few days ago. The day was not too eventful. We took Vince to see the doctor because he has a wierd green thing in his thumb. It looks like a cross between a splinter and a wart, but it is bright green. Anyway, the Doctor told us to see a dematologist at the Hosital and gave us a referal. But the most exciting part of the day was parking our car near the Doctors office. We saw evidence that the enforcement of illegal parking has picked up (chalk licence plate numbers and phone numbers left when cars are towed) and so drove around the neighboorhood looking for legal parking. We found this huge tall narrow building with six large mechanical doors on the front and signage indicatimg you could park there. We figured out it was an automated mechanical parking garage, and after talking with a nearby attendant, we drove up, the door opened, we droved the car into two little slots, and following the directions of a chinese computer voice, we got out of the car and walked out of the building. The door closed behind us, and once we had entered the licence plate in the computer, the car was turned sideways, and lifted high into the air, and put on a shelf with a bunch of other cars. It seems that they can stack the cars 20 high on either side of the narrow building. With 6 doors in a row, this amounts to 120 cars parked in the space it would normally take to park 18 cars. It only cost us 20NT (60 cents) for having the car there about 40 minutes, making it the most economical amusement we have had in some time. I want one for our house, but I guess since we don’t have 180 cars it would be a waste. 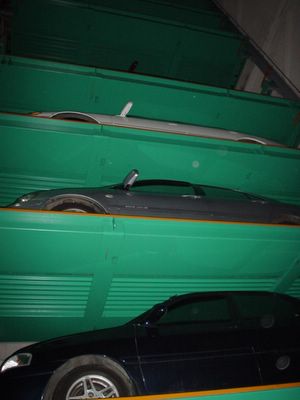