Well, thanks and see you on the 8th.

Hi, Donald, your birthday is coming too. What kind of gift you prefer?

For the clothes and the checks for the kids. I’m sure we’ll find both very useful. 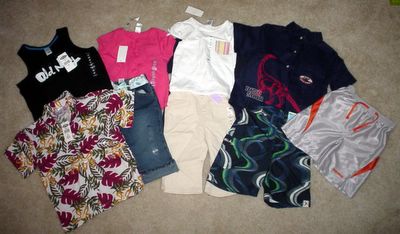 Clothes for the kids.

I went out to dinner with Frank. He has a Microsoft Prime card that lets you get deals at certain restaurants. We got italian for about 10 dollars. Then we went home and watched Road to Perdition. Good Movie.

Frank and I met up with Ray at the Team in Training group ride. We were just tagging along really but they were doing hill repeats. It really wasn’t all that big of hill, but whatever. It was a good atmosphere. I can understand why a lot of women do TNT. Everyone is super supportive and there’s no egos involved like there is on certain group rides.

Later on, I hung out with Ronnie and Josh. I played some go with Josh. I lost pretty badly since I have no idea what I’m doing in go. Then I tried to solve a Rubik’s Cube but that just made me feel stupid.

Then I went to Rich’s to play some poker. I lost 7 bucks which is a bummer. They play a lot of weird games that I don’t know what the strategies are, or what the expected outcomes are, so I end up losing a lot. Tho we did play tournament Texas Hold ’em for while, and I did okay there. I just needed to be more aggressive at the end.

I rode the Sea Otter course down in Monterey with Jason. I was surprised with myself since I don’t think I’m in great shape for the race coming up in April. But I managed to finish the course without too many problems. Tho I did hit a tree with my left shoulder coming around a turn. Good thing there’s a lot of meat there, so it’s nothing more than a scrape.

Ate chinese for dinner with Ken and Choon and some other folks. Everyone teased me cause I was dressed up in a nice shirt and shoes, which usually I’m in T-shirt and Birkenstocks. I notice that I was the only single person at the table of … 10. 😛

My Laptop is dead. The LCD panel broke, so there’s no real chance of repair. It’s too bad. It was a good laptop. It’s still pretty slim even by today’s standard. It’s a big bummer. It served me well for 5 years. I’ll have to take the 40gig HD out and move it to my other screaming machine – a P2 350. 😛

Went to Melvin Chen’s piano conert at Bard. Amazing 90 minute concert with pieces from 5 composers all from memory. Bob and Katherine had a party at their house after the concert and we all were congratulating Melvin and asked how he performed so much music from memory. He said that if he forgot what came next, he just *get this*, he just made it up! Who knew?

Before the concert, we took a long dog walk with the kids and headed down to Blythewood and let the doggies run off leash. That was a lot of fun. It’s was a beautiful day here.

Mom decided to retire after May officially. She is going to leave Richland in April. Mom is asking:

1) May be, 8th or 15th of April, if you have time, help Mom to move from Richland to Washougal. Mom does not have too much things to move. A weekend is enough.

2) On April 17th, we are going to Las Vegas and ready to tour the country for a month with our friend and his wife using his Ford. I don’t know where exactly we are going. Do we have any volunteer to check our email on “mail2web” if case we have access problems?

Dad will continue to find some part time jobs to cover some of our bills. We will be together permanently. 7 1/2 years of commuting is just too much for both of us.

Tonight we invited Chee-Chow and his wife Michelle over for dinner. Turns out that Michelle grew up in Maryland, not far from where we grew up. Jeremy invited them over at 5 and the dinner of beef stroganoff was on the table by 5:20pm! Vince acted pretty grouchy tonight and Edda was very fussy, so they left at about 8pm. 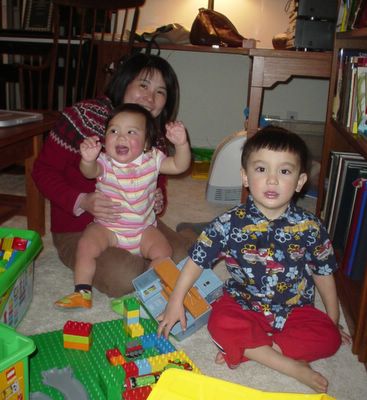 Michelle with Edda and Vince.

We went to Barnes and Noble and bought guide books for France and Germany. We were out soo late. Oh well.