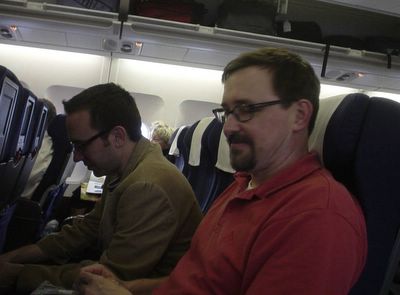 So our France vacation begins, we are on our red eye (Swiss air) to Geneva. On the flight are Ben, Jeremy, Doris, Katherine, Bob, Vincent and Edda. Ben and Emy arrived at JFK via the subway. Bob and Katherine arrive together and the four of us take the trusty Volvo down the Taconic freeway to JFK. Jeremy and I are driving along the Hutchinson freeway, which is just north of NYC, when Vince announces that he has to go potty. Now we are in the heart of NYC traffic. If we get off at an exit, they only lead to other freeways or else into the city where we are bound to get lost. Jeremy pulls over to the side of the Hutch and tells Vince firmly, “Pee only, no poop.” Vince looks at Jeremy and says, “I gotta poop, no pee.” So there we are on the side of the Hutch, a million cars whizzzing by and there is my son, crouching and making a turd as large as Ruby’s on the side of the freeway. Jeremy insists on picking up the poop, so we wrap it in a diaper and shove it into an empty Kleenex box.

Speaking of Ruby, we left her at this place, Professional Pet People in Rhinebeck, NY. She was excited to see the other doggies there (it’s a completely cageless boarding place), but once she realized that we were leaving her there, she jumped over the 3.5 foot high fence, they had to put her in the back where the yard had a higher fence. She was pretty sad to be left there.