Jeremy took the day off work to chaperone Edda’s field trip to Mt. Vernon.  We talked about Washington crossing the Delaware at dinner tonight.  Vince’s pal, Owen, was at dinner and he’s a bit of a history buff and we wondered if we’d still be an English colony if Washington was unsuccessful in his Christmas Day attack.  Jeremy thought we’d still being an English colony today.  Owen said it would have only taken another year to get independence.

Edda boarded a fancy coach bus which did have a wheelchair lift.

Jeremy was bemused with the conversation on the bus which alternated between kiddie jokes and racy jokes.  Edda’s pals were impressed that Edda had her own phone.  Most kids here have to wait until middle school to get their own smartphones, but not Edda.

I hate to even mention how busy we are because all the things we are busy with are our own fault and because we are excited to be doing the things we are doing.  We are busy!  Jeremy got up at 5 am to start work before he left for the trip and then promptly started work again when he got home at 3ish and he’s still at it now.  He’s set up a permanent workstation in the dining room with multiple screens.  It’s close to the coffee. 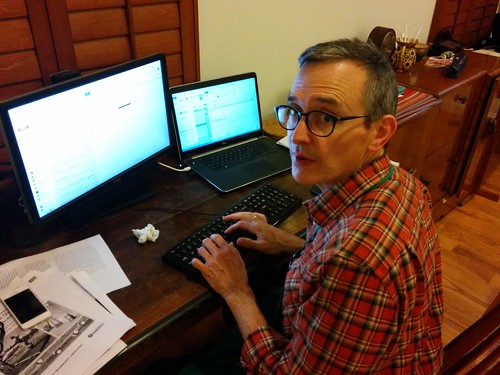