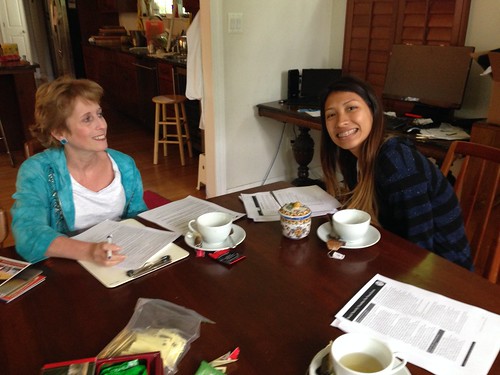 We’ve been introducing Keyla to the inner workings of the Lee-Martin household.  Fascinating all-around, I’m sure.  Because of the transition, I’m introducing her to Edda’s team – her school and her therapists.  I’m not often at Edda’s school nor do I go regularly to Edda’s therapy sessions, so it’s nice to catch up with these folks that I often email, but hardly ever see.  The above photo is with Amy, our local au pair coordinator, who is now a good friend of mine because she has seen me through many, many au pair adventures which started in 2008.

I took the opportunity today at Edda’s OT to make an appointment with the PT in the office.  Edda’s feet are flaring out because of her constant pacing and her feet now can’t be placed in the proper angle from her ankle.  If you know 2nd position in ballet, that’s how her feet are stuck.  There is some deformity in her ankle bones, so I need to get someone to look at them and make sure that it doesn’t get worse.  More worrisome, but probably something that we can do less for, is the appearance of scoliosis in her spine.  I can really see it now, it’s worse now than it was even 6 months ago, and it’s more marked when she’s awake and doing her repetitive hand motion.  Perhaps it’s worsening because her body is trying to grow taller as she heads into puberty.  I think the PT will be able to address the feet, but the back, I think I might have to head to Children’s to see an orthopedist.  This is my summer goal for Edda.  To make it to the ortho’s office and have a baseline x-ray taken, get AFOs for her feet.  Maybe a brace for her back. 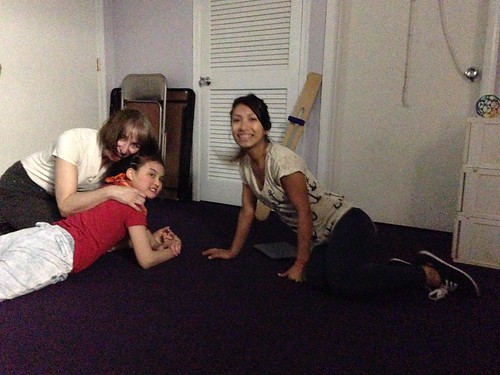