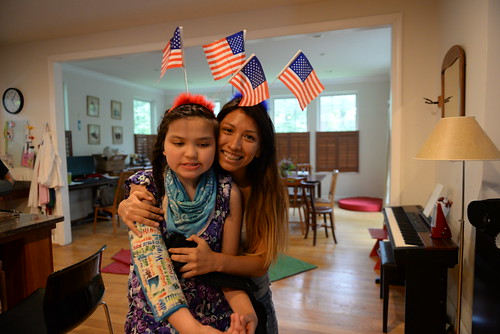 Keyla and Edda celebrated the 4th by enthusiastically displaying their USA headgear.  Did you know in Argentina (and other places, I assume now) pronounce USA like ooosaa? When Keyla first said this I was confused, ooosaa?  What’s that?  Apparently it’s how the USA is known in places other than the USA.  Anyways, hooray oooosssssaaa women’t soccer team.  Way to go!

Vince came home from scouts on Saturday.  It’s nice having him at home again.  Even though he spends a lot of time in his room, it’s much quieter in the house without him.   He got his camping merit badge and a pottery merit badge at camp – he always says he has a lackluster time, but I think he’s just being too cool for school.  Poor guy, came home from a week in Rome (no internet) a week at scout camp (no internet) and then landed in our house where, alas, we had no internet.  The biggest news of the holiday weekend was that our internet went down on Friday morning and Jeremy spent 100 minutes on hold with Verizon to get an appointment for today (Sunday).  We went more than 48 hours without the internet.  It was like we were living in 1990 (well not really since we all had cell service).

As a result of my inability to surf the internet freely for celebrity gossip or to do any sort of online shopping (I don’t really like surfing the web on my phone), I actually read a book.  I’m reading one of the true crime variety which is both fascinating and repulsive and I think it puts me in a bad mood.  I probably should stop reading it because of the bad mood, but now I want to know what happens!