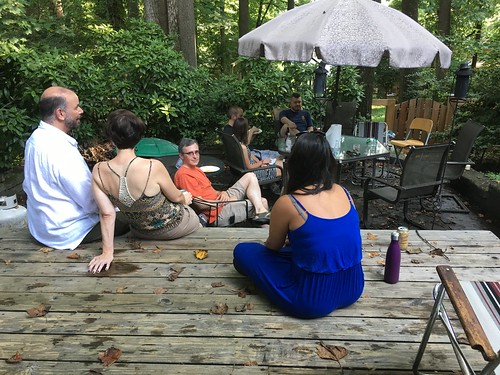 On Saturday, we went to our next door neighbor’s 32nd birthday party.  There, I met a fellow Wootton alum, though she graduated in 2010 and I had to admit I graduated in 1990.  Anyways, what was interesting about her is that she’s just ditched medical school.  She’s going to grad school instead.  She said she ditched med school because they scooted her into a patient’s room, gave her 15 minutes and told her that she needed to get all the information she could about the complaint that brought the patient in.  Nothing about their personal life, nothing about extenuating circumstances, nothing about the person themselves – just focus on the illness itself almost separate from the patient.  It was not how she wanted to practice medicine.  I was shocked (but I guess not surprised) to find this out.  In nursing school, I get scooted into a patient’s room and given 15 minutes – half my grade is based on the, let’s say, postpartum assessment – fundus height, locia, episiotomy, etc and the other half is based on my conversation with the patient – did I find out she’s at risk for postpartum depression, that her family is far away, that her husband works long hours and she doesn’t have a car?  I guess I had read so many articles about doctors trying to treat patients more holistically, that I was sure they were doing the same sort of patient interactions we were.  Oh well.  Just happy I never went to med school. Anyways, if I had gone to med school, I would have never met Jeremy and this whole blog would not exist.

I think I do not really know how to have fun.  There are various ways I have “fun” – like decluttering, going for a run, fixing toilets – Jeremy thinks that they are fun to me because I have subconsciously decided that they are a form of work and that I really just enjoy working.  This does cause me some consternation as I’d like to be able to have fun, but the latest credit card bill is revealing.  It separates Jeremy charges from my charges.  I like to charge things like: gas, groceries, gifts for other people, car registration, dental bill, A/C repair.  Jeremy likes to charge things like: ice cream, rental cars, hotel rooms, dinner at World of Beer (which, I know, I was at too, so it only counts half), coffee, movie tickets.  Speaking of fun, my boys are headed out of town again to have some fun – this time with Uncle Ben and nephew Ruben.  I’m hoping to post some photos as they will be in cell service the whole time.

Vince made pizza from scratch for dinner tonight (including the dough).  A spinach/tomato/feta one for the grown ups. 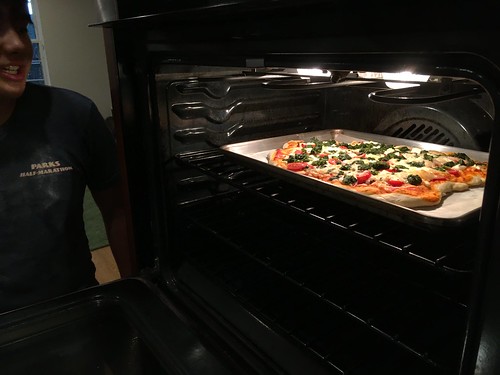 Pepperoni with stuffed crust for the kids. 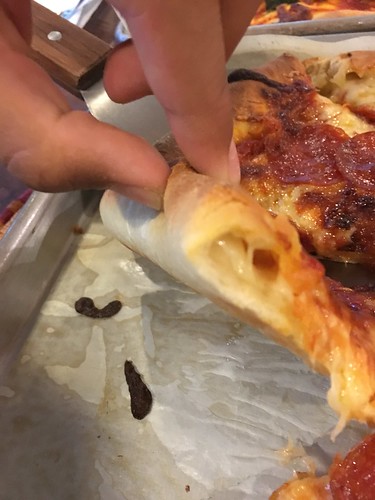 This is Nat’s last week of working for us as a steady gig.  She’ll pinch hit every once in a while, but she’s got 6 classes going on in the fall and they scared her good and plenty at the orientation.  We’ll miss her, but I know she’s always going to be close by.  xoxo! 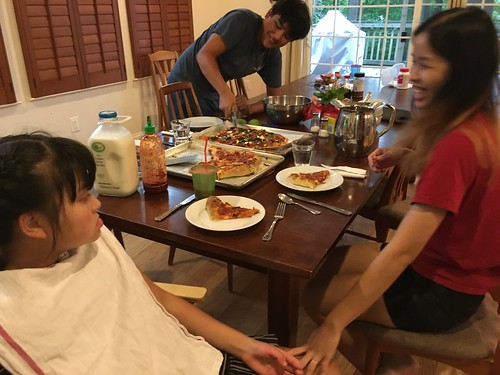