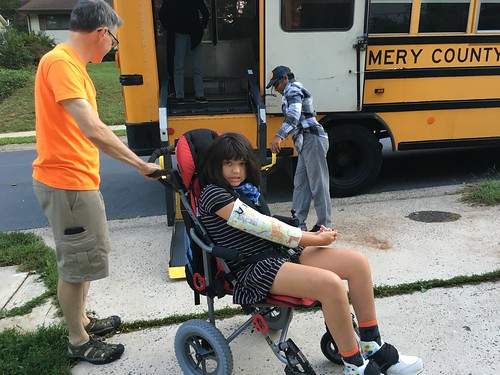 Back to school.  We are a little tired from the weekend activities, but I guess that’s good.  My doc called me today about my UTI last week.  Apparently the culture grew E. Coli bacteria that was resistant to cipro, the doc told me to stop the cipro (sorry, can’t do that, my last pill was on Sat) and start taking some other antibiotic.  But last week when I took the cipro, I immediately felt better.  Is it all in my head?  Half of all medicine, I swear, is just in your head.  That’s why I laughed when the vet offered to do acupuncture on Ruby’s arthritic legs – because Ruby would have no idea what’s going on, so the 50% benefit you are getting by spending the money and thinking that the acupuncture will work is lost on the dog.   Though Jeremy thought there might be a second order effect, that I would feel better getting Ruby acupuncture and Ruby would feel better when she sensed that I was feeling better.  So now do I take the other antibiotic even though I feel FAN-TAS-TIC (not really, but yes, regarding the UTI).  I think in my efforts to not make any bacteria more antibiotic resistant, I have failed and sent into the world invigorated and fortified E. Coli bacteria, off to colonize other unsuspecting urethra.