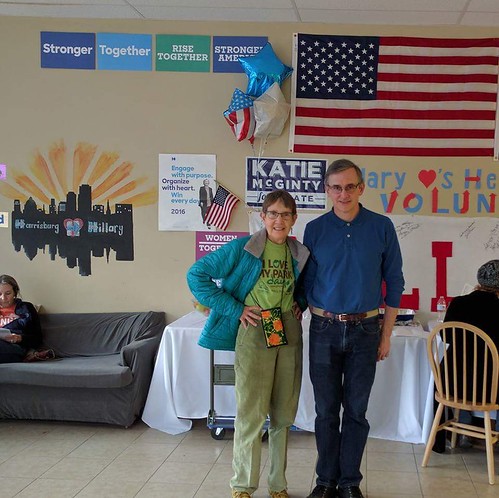 Here we go!  Excited about tomorrow – Jeremy and Katherine spent two weekends canvassing in PA.  Neither of them were entirely thrilled about knocking on hundreds of stranger’s doors, but they did it anyways and they made a great team.  No one harassed Jeremy because, really, what fun is it to harass someone with their mom and no one harassed Katherine because she had Jeremy with her. Actually, they told me that everyone they met was very polite. Jeremy’s driving up tomorrow again to help encourage people to go and vote.  I held down the fort here for 10 long, trying and sleep-deprived days.  Stronger together!  #imwithher.

This was the last day of my of my community health clinical.  Look at my classmates!  They took 75 selfies (most of them with me in them, but I enjoy taking photos of selfie attempts).  Some of the youngest ones were like – no I don’t like that one, or that one, or the other one.  Sigh.   They are so beautiful, you try to tell them over and over again.  No one listens to the middle-aged mom. 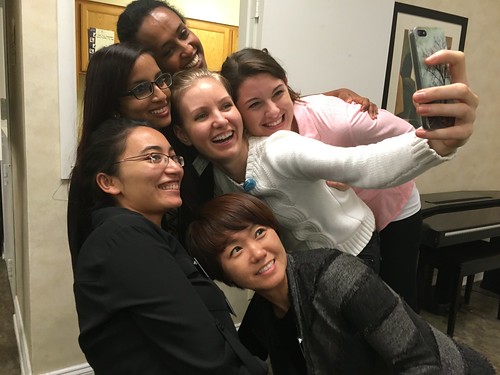 We had to do a bunch of projects together, and this random group was (by far) the easiest group I’ve had the pleasure of working with.  Super competent, diligent, super everything.  We finished one 30 page paper two weeks early as a group – just like that – boom!  When does that happen?  Like never. You want these people as your nurse. 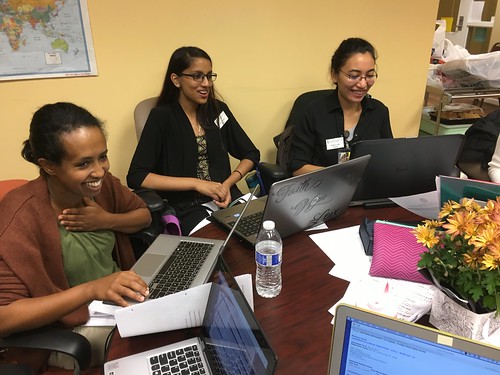 I got home from clinical to find Ruby not home.  I had made the follow-up appointment at the vet for this morning at 9:40 am.  Jeremy took her there, I was at clinical.  Jeremy described as best he could Ruby’s episode last week, even though he wasn’t there.  They talked over a few possibilities, including maybe some thyroid malfunction.  So they took her in the back to draw some blood while Jeremy sat in the waiting room. The stress of getting blood drawn was enough to send Ruby hyperventilating again and struggling to breath just like last Wed night.  She was turning blue and they called Jeremy into the lab area when this was happening.  They got some steroids into her, they got her on an oxygen mask, they got her Lasix (diuretic to get any edema out of her lungs) and they were about to do an emergency tracheotomy.  But thankfully, she recovered again after about 5 min.  The vet checked to see how well Ruby was recovered by asking Ruby if she wanted a treat.  She happily took the treat.  They gave her a sedative to take an CXR (chest X-ray), and it was clear.  No cancer, no obstructions.

According to the vet, there is no rescue inhaler, no epi-pen type thing to give her the moment she has this episode.  So we need to keep her calm and cool and not going up hills.  The other option would be to have surgery – this constriction is happening because of some flaps in her throat closing shut, they would surgically tie back those flaps.  If they tie back those flaps, then she would have (always) a 25% chance of developing aspiration pneumonia (where the water she drinks goes down the wrong way – not into her stomach, rather, into her lungs).  That’s not so awesome either.  I got home from clinical and Jeremy picked her up from the vet and we read over all the papers about the surgery and thought about the numbers in the paper (23.5% of pneumonia, 60% of pneumonia cases happen w/i 14 days of surgery…etc, etc).

Finally we decided if the visit to the vet sent her into so much distress that she almost died, maybe we shouldn’t take her to the vet anymore for guaranteed more visits to the vet?  Ruby is now 15 years and 10 months old.  All her friends that we met at the dog park that were her cohort (Ulrika, Hannah and Molly) have all passed away.  She’s like 110 in dog years.  That’s where we are at now.  Maybe I’ll change my mind later.

I fed her chicken from the table tonight.  She seemed very pleased. 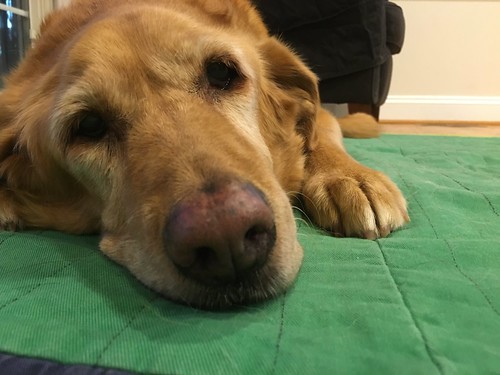