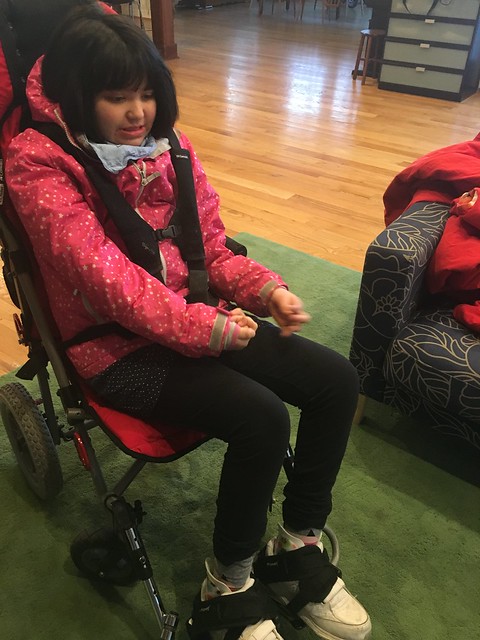 Ever since we stopped using au pairs for Edda-care, the most precious thing that we’ve given up is the morning care – getting Edda ready for school.  It helps us both out a ton to have the 75 minutes from 6 am to 7:15 am free. There are other things that we’ve given up too – a regular weeknight date night (which I think is OK as long as we get to chat most evenings from 9:30-10pm, no need to actually go out.  Anyways, we both have evening things going on which make date night logistically difficult even if we did have childcare that would go until 10pm) and clean laundry for Vince (I picked up all of Edda’s laundry, but Vince is suppose to do his own.  I have not done it in many months now.  I don’t think he’s done it for months either.  It’s disgusting – yes.  But I’m hoping falling in love will change that.  You know when they ask a girl what they are looking for in a guy and she says – well I want him to be kind, have a good sense of humor, handsome, smart, etc?  They don’t even mention good hygiene because that is like an understood baseline criteria – right next to being alive.  Girls don’t start their list – well, I’d really like him to have a pulse.  ALL girls want a guy with good hygiene.)

Got off track.  Jeremy’s been doing the am routine because he’s a nice guy.  But now he doesn’t want to be just a weekend bike warrior, he’s trying to fit bike a workout in before heading to work.  And so we are trying to figure out what we can do.  (Marriage?  Not about love & flowers & kisses.  It’s all about who gets 45 minutes to themselves in the morning). 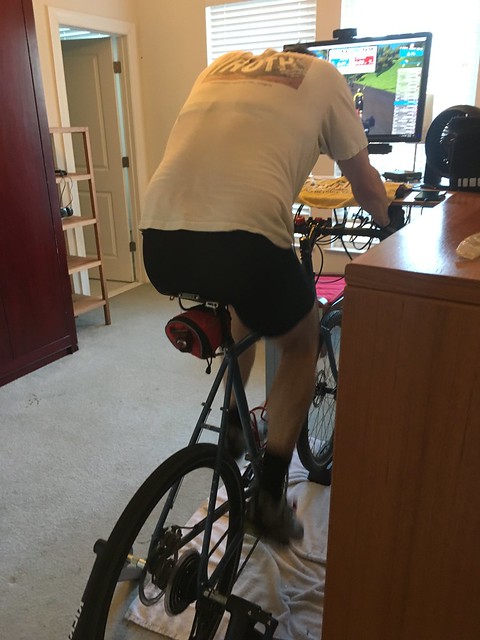 So many people are thrilled, just thrilled that it’s 75 degrees in February.   I’m not thrilled.  I think we are doomed.  I wore my down coat and fuzzy boots this morning to protest. 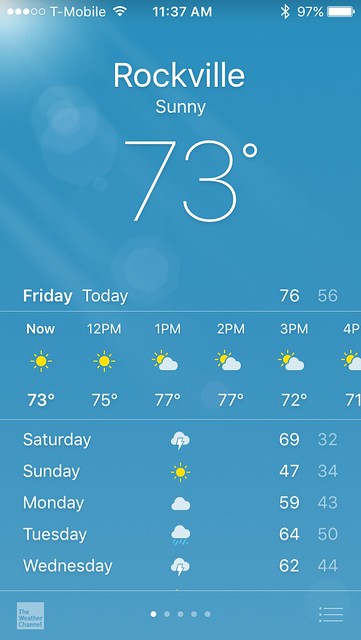 But I did enjoy a nice ice cream cone. 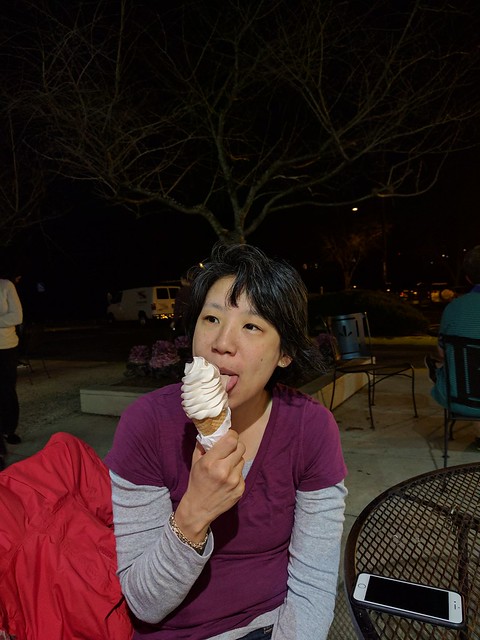 Friday night dinner with my parents at A & J.  We got there early enough to not have to wait in line. 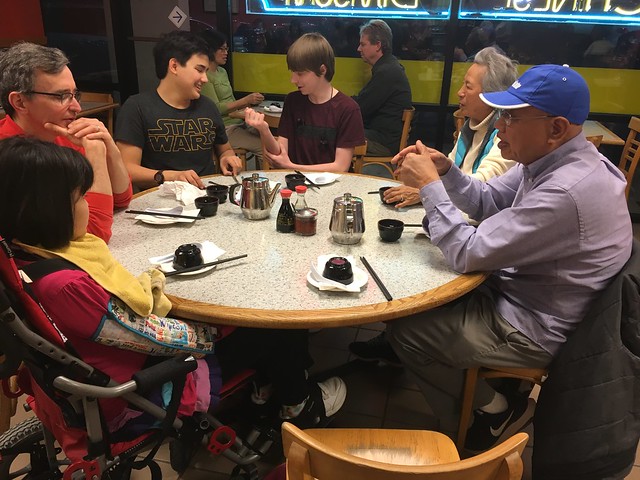 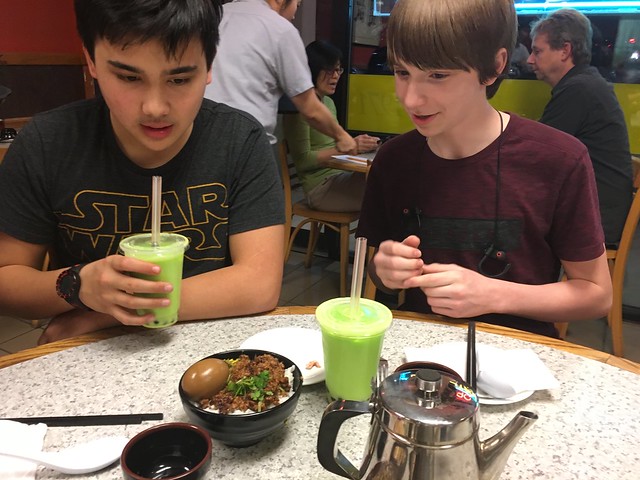 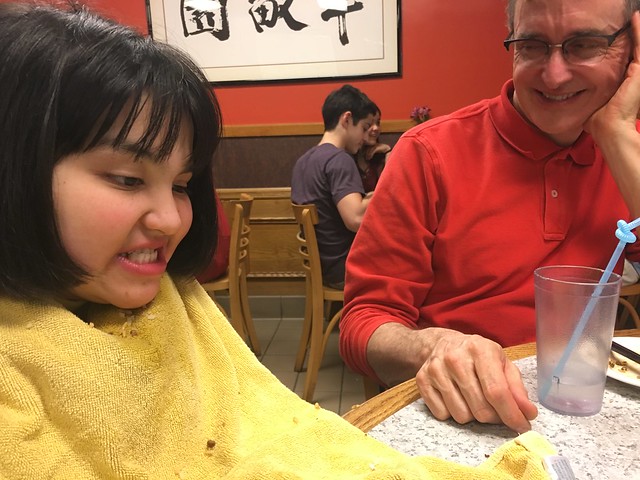 Afterwards I took the boys to see Avenue Q at Montgomery College.  This is the only musical that I know all the songs to (except for Les Miz which was in high school). I missed this on Broadway so I grabbed this chance – $10 a ticket!  A bargain.  It’s a little dated – it’s hard to imagine a closeted homosexual having such a tough time coming out in NYC these days.  Also references to computer labs at college where everyone is huddled together at 4am in the morning.  And a big thing about Gary Coleman which the boys have no cultural reference to.  But it was funny and great.  The boys loved it.  I played the soundtrack 17 thousand times to Vince when he was pre-verbal because it sounds like kiddy music, but then he became verbal, but not yet understanding and there are many raunchy songs on the soundtrack so I had to stop listening to it when I would hear from the backseat of the car from the tiny Vince – “The internet is for porn!”  Whoops.  Can’t go to preschool singing that song. 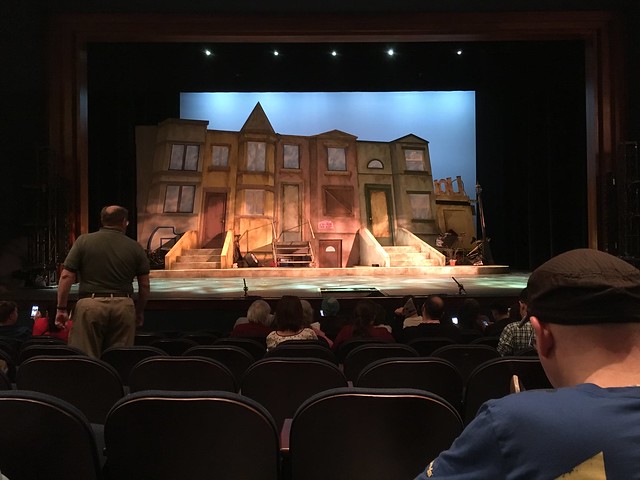 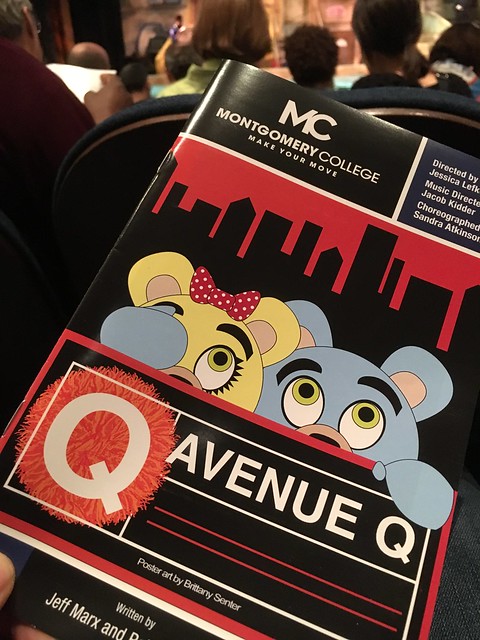