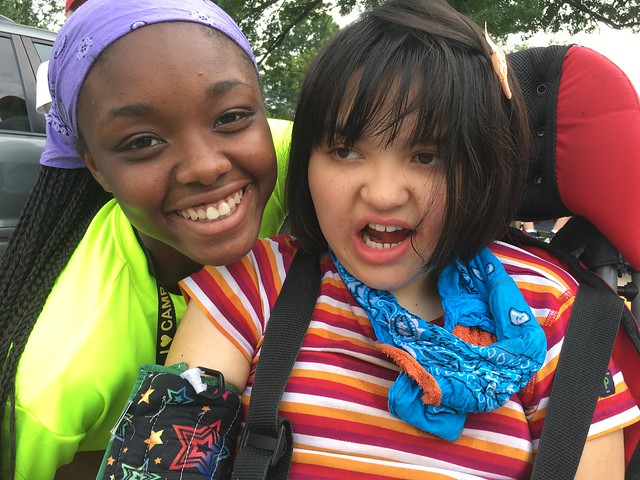 Edda’s spending her days with her counselor, Aurora, at Camp JCC.  Aurora is the daughter of a former coworker of Jeremy’s, so Aurora has been to our house for Edda’s birthday pancake breakfast and we’ve been to parties that her parents have thrown.  Aurora and Edda just happened to be matched up with each other this summer.  I didn’t recognize her at first!  I see her only once a year, and I usually concentrate on her parents and everyone changes so quickly when they are teenagers.  So far so good.  They both seem very happy.  Camp can be hard for both Edda and her counselor.  Edda (I think) is a reluctant summer camper.  She likes air conditioning.  She dislikes hot weather and sports with balls.

This past week’s trip to Long Island and Maine made me realize how hard it can be to manage Edda in unfamiliar places.  I can care for Edda completely and with relative ease in our house and going to places such as Target, movies, grocery stores.  But once we start visiting other people’s houses, it gets really tricky.  When we were at Alan’s house on Long Island, we didn’t shower Edda even once because there really wasn’t a walk-in shower.  While were were at Julia’s house, I showered Edda only when Jeremy was around because I could walk into the shower with Edda and wash her and then hand her off to a dry Jeremy waiting in the bathroom.  We were fortunate that in both places, there were bedrooms on the first floor of the houses.  In Maine, Jeremy would go on a long bike ride and I’d think, oh!  I could go get some groceries or toiletries in town, but there were five steps from the elevated porch to the ground and I didn’t think I could manage to get Edda down them myself.  I couldn’t ask our host who is into her seventh decade to help.  I guess I could have gone next door to ask our host’s niece and nephew-in-law, but I had just met them and I can be shy about these things (actually I know people will jump up and help when directly asked). So we just sat on the porch until Jeremy came home.  Jeremy acts very confident when easing Edda down the stairs, singing to her, or talking to her in a happy voice while Edda awkwardly bends her knees to go down each step.  But when I told him about my fear of going down the steps towards the end of the trip, he admitted that he felt pretty precarious too.  He can’t see his feet or the steps or hold the handrails.  And his feet are always entangled in Edda’s feet as they go down the steps.  I’m not quite sure how this crept up on me, I think we haven’t traveled with Edda in this way for a while (hotels are easier and you can ask for an accessible room).  Thank goodness Edda is done growing.  With her spine fused, I think she’s at her max height and max weight.