Well this has been a week back to routine except that since Vince is still out of town, the house is much, much cleaner & quieter.  Edda has camp all week, we have childcare at the beginning and end of the day – so this marks the first week since Edda’s surgery that I’ve been back at work full time.  And not unexpectedly, I’m a little blue.  I applied for only one nursing job that I thought for sure I’d get, and I didn’t get it.  Also, a visit to the gyn early in the week confirmed my segue into perimenopause as my estrogen levels have started to dip.  Ack.  Anyways, it’s all fine, of course.  When I got my period in middle school I couldn’t believe then that I had to put up with it for decades (into the 2000s!) and now that it’s about to disappear in the next half decade or so, I’m getting all nostalgic.

Kitachi’s birthday is on Friday, but she’s working only tonight and tomorrow night this week.  Jeremy’s out tomorrow night, so tonight was the night to celebrate!  We made her favorite dinner – tacos and had a brownie cheesecake.  Yummy.  Kitachi is moving to Texas in a few weeks, she’s been with us for over two years now.   We’ll miss her a bunch.  I’m always both happy and sad when our care providers move on…I know they gotta do other things, but they’ve become an extension of our family.   Sometimes I think they know Edda better than I know Edda.  Maybe Edda lets them in on her little secrets that she doesn’t tell me. 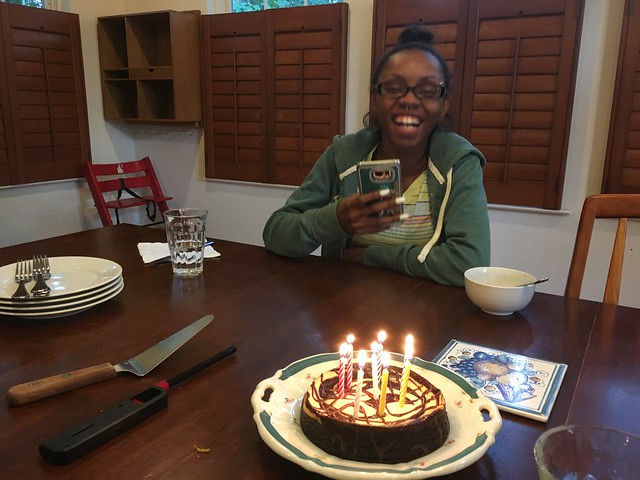