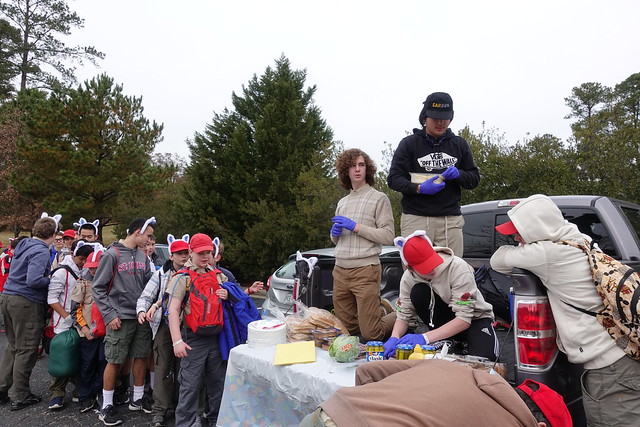 I spent the weekend driving boys in Vince’s scout troop to Great Wolf Lodge in Williamsburg, VA.  Scouting is Vince’s big extra-curricular activity and we really don’t help out that much, so I decided that this was the weekend to do it.  We (we meaning Jeremy or I) have had some experiences with this volunteer driving that end up being kind of frustrating – like they say the need, need, need drivers and then when we volunteer to drive.  Then at the last minute boys have dropped out or they get an extra driver and then they don’t really need us as drivers, but we are standing there at the start and we all are kind of expected to go.  It frustrates me to no end that someone could have had their weekend back in Rockville (not necessarily me or Jeremy), so this is what happened at this trip and I started it off all mad.  It did not help that Vince wanted to abandon me and go in another car with his friends who were ditching me to go with a cooler parent, so, possibly, I would be driving hours and hours with no one in my van (I think if I had no one in my van, I just wouldn’t have gone), but Vince grudgingly went along in my van (spent the whole time mad at me for not letting him ride in the hipster van) and I did end up with a couple of scouts in my car.   I think they want the parent volunteers to volunteer because they love the boys and Great Wolf Lodge (GWL is not really my jam, nor are things like Disney or Harry Potter World or Hamilton or anything where the value/money ratio is way out of whack – I might love them in isolation, but the rate of money consumed at any of these things rapidly strips the sheer joy of it from me), but I volunteer so that the trips can happen and other parents can sleep in their own beds.  But in the end, I’m glad I went because 1) I got to see Gina, my quilting coach, 2) I got a leisurely run/long talk in with Charlie, who has been heading the scout troop for 4 years and got to hear about Vince and his pals who are the next ones in line to lead the troop, 3) I got to see the changing dynamics of Vince’s friend group, 4) I got to meet some parents  and 5) Jeremy needed a weekend alone to work (he’s in California this week) – and, I think in the end, I was a necessary driver (kind of, because someone left early with a lighter car load).  In other words, I spent the trip reframing my grumpiness, lol.  Honestly, I spend 80% of my life reframing, turning, I don’t want to be here, I’m mad at this thing, I’m irritated by that thing into, I want to be here, I’m not mad at this thing, I’m totally not irritated by that thing.  I mean, there are things to really be mad, sad/upset, irritated by, but 99% of it all is not worth the emotional energy I could potentially spend on it.

Gina, my quilting coach, lives 20 minutes from GWL, so I spent the afternoon with her in her sewing room!  I got to see all her supplies and fancy machines for the first time.  I brought my two finished quilts (one for Vince, one for Edda) and she critiqued them and suggested that I learn to bind my own quilts. 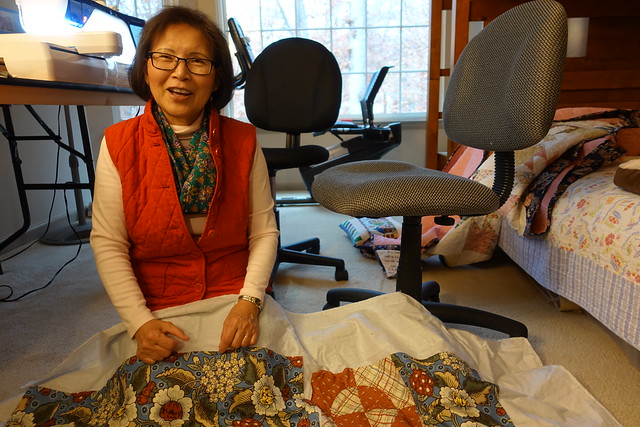 Lovely afternoon sewing.  Gina is such a wonderful resource, even watching her measure and cut fabric is illuminating.  I have had some trouble cutting fabric (which I didn’t even know that I was having trouble) just because one has only two hands or that one is right handed, but when I watched her measure/cut, she used two rulers instead of one which totally eliminated the trouble I was having.  She also taught me to bind my own quilts.  Gina is my good friend Vickey’s mother.  I’ve known Vickey for almost a decade now.  Being work colleagues, we’ve spoken most days out of that last decade, so it’s fun to hear stories of Vickey from her parents. 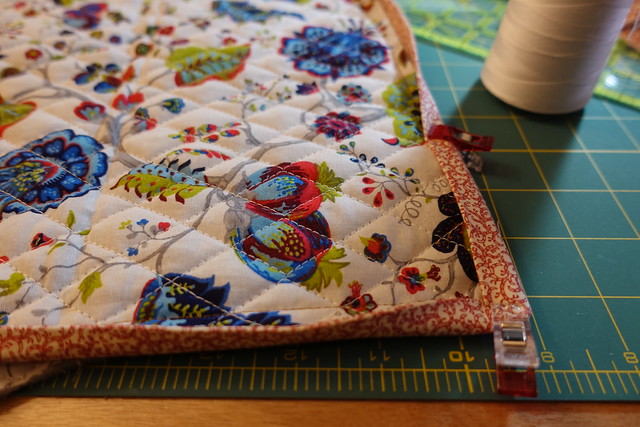 Back at Great Wolf Lodge, I gratefully accepted the grown-up room only assignment and chatted with a number of parents.  Sometimes it’s a shock to the system that these people are my contemporaries.  In my head, I think I still look 20.  But this is not true.  I look like I’m 45 and proof is within the faces of parents with children the same age as my own children.  Charlie, the scoutmaster, and I went to a nearby park to run on Sunday where I got the low-down on some group dynamics of the boys within the scouts.  It’s interesting to hear an outside perspective of your own son from a person who has seen him, essentially, grow up. 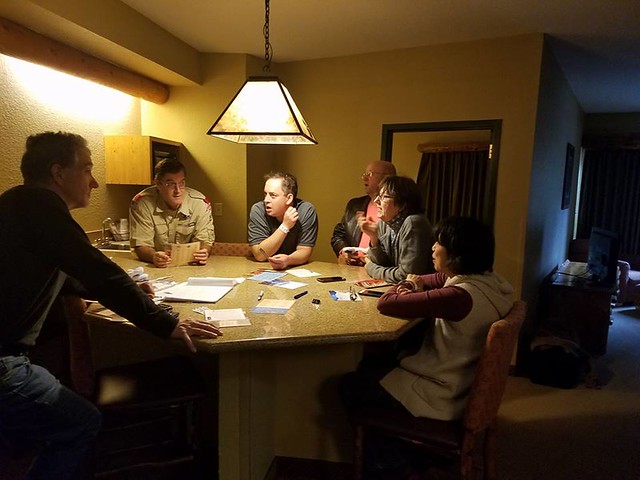 I drove back and forth to Williamsburg, VA this weekend and then today, I turned around and drove to downtown Philly to see my friend Vidya who had that stroke a few months ago.  I had wanted Jeremy to come with me, but our schedules never seemed to match up with adequate child care for Edda and I didn’t want to wait too long between visits.  A trip to Philly takes all day and honestly, it’s easier for me to slip away on a weekday when I have a more extensive and predictable child care/school schedule.  So I went today and I must say I was incredibly relieved and optimistic for Vidya, he just transferred out of ICU into rehab in downtown Philly. You know every once in awhile, you get asked a question, Which would you prefer to live into old age with? – the body of a 30 year old or the mind of a 30 year old?  I always hesitate on that question.  But I think Vidya wouldn’t hesitate and would always, always pick having the mind of a 30 year old.  I think he’ll be able to write about science and philosophy to his heart’s content once he can get the right equipment in place and once all his physical needs can be stabilized (which is still an incredible uphill climb with a long way to the top).  He’s still quite immobile, can’t speak/eat and has some pain issues, but I thought what K. (his wife)  said was true, that he can get a lot of quality of life back even with all these physical limitations and who knows how much physicality can be regained?  There was marked improvement even just from my last trip. I thought I’d only stay at the rehab facility for an hour or two, I ended up staying almost seven hours.  While I was in Philly – Jeremy managed to accidentally leave his wallet at the TSA check-in at BWI on his way to California and Vince sent me an urgent text about some terrible grade on a test and Edda was fine with Adriana’s help who picked her up from aftercare and made her some dinner.  I got home at 8pm.  And we all go on, one (literal and/or metaphorical) foot in front of the other.  Let’s just hope we don’t get in a big fight with North Korea.  That would really f*ck us up in addition to all the things that are already f*cked up.