You know, I was all prepared to talk to my children about many things: sex. drinking. drugs. relationships. money. social media. I’ve done it all, bought condoms and put them on bananas (Vince turned them into water balloons and dropped them all out the bathroom window – middle school), talked about consent, Juuling – which Vince brought up first, how to be fiscally responsible (what retirement plans are, what a good mix of spending/saving is), trying to keep an eye on the memes (I’m terrible at this). I’m waiting on the relationships (though we’ve talked about sexual orientation), but now I get to talk to Vince about school shootings and protesting about gun control.  He heard that students at RM were organizing a walkout yesterday (Wed).  You can read about it here.  Because our HS is so close to the Metro, the kids were going to take it all the way downtown.  Vince was unsure if he was going to go – we told him that protesting was, in this case, important, but if he wanted to go to just blow off school, it was not a cool thing.  I dropped him off at school in the morning (and he was still unsure) and gave him a Metro card, a portable charger, told him that if he decided to go to text me that he was leaving school and turn on his Google locator for me.  He looked at me and said – I know, you are a worried mom.  And I said that if he went, that I was more worried than the “generic” worry – I was worried that there would be a bunch of kids in the outdoors with no protection and I was worried that there would be a copycat.  He said – copycat?  And then I had to admit that I was worried that someone would shoot them.  And then he quietly said – oh.  He decided not to go because there was some classroom stuff he’s behind on, but he said he regretted not going when I picked him up.  Then this morning, he was about to leave for school and then he said that there was a shooting threat for his HS and he seemed quite worried.  I wasn’t sure what to do, do I tell him how to hide in his classroom?  How to barricade the door?  To not be a hero? Or do I tell him to not be worried?  I did not take it seriously enough to even consider having him stay home. Then tonight, he fleshed out the shooting threat story a little more.  Apparently a student threatened to shoot up the school right after the Florida shooting and immediately got suspended and today was his first day back at school.  The student said that the original threat was a “joke” but during his suspension posted some threatening stuff on social media.  And this kid is, if it wasn’t apparent, slightly odd.  So Vince reported that a lot of kids were not in school today.

For Valentine’s Day, I asked Jeremy to go to this play at Montgomery College.  I like celebrating Valentine’s Day around the actual day and not on the actual, actual day.  An Enemy of the People – Ibsen.  I wanted to do something for Valentine’s Day that was an outing and kind of cheap (Wed night was buy one get ticket free, so it was a $12 outing) and interesting.  So the play was excellent and I like supporting local theatre, but man, it was serious and timely.  There was a lot of yelling. 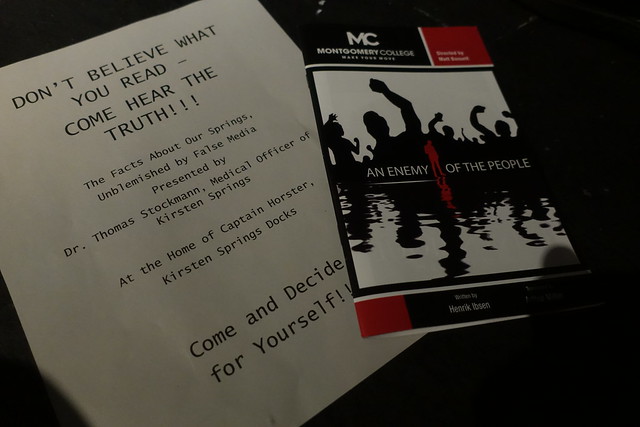 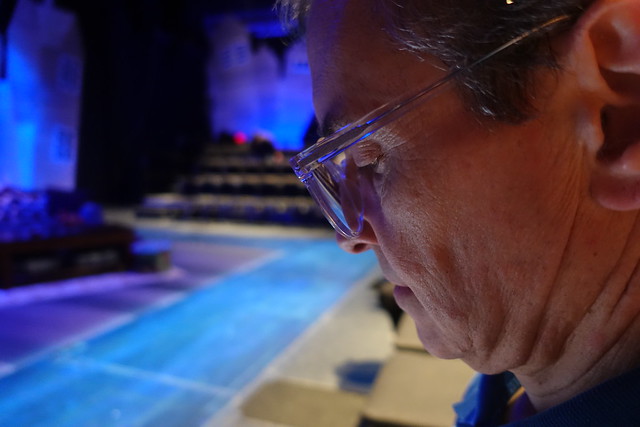 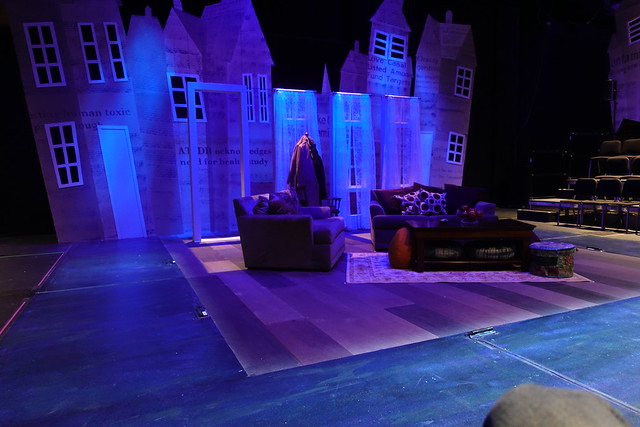