So we left Case without the official tour – we were going to rebook for Friday on the way home from Maryland, but everyone wanted to head straight home.  One can stand only so much family time – we all shared a single hotel room every night and Vince was listening to youtube channels and laughing with his Maryland friends late into the night, Edda would wake up with loud announcement at 6 am.  I will say this about the 4-5 hours we were in Cleveland, everyone was super nice.  If there was ever an award for being nice to strangers, Cleveland would win.  We got asked if we were lost and needed help with directions, we got a personal tour of the gym because though I think most college campuses are very accessible, you have to know where all the accessibility is – the elevators and corridors might run from different buildings to different levels – we needed help getting Edda and her wheelchair from an upper grassy level down to street level and I couldn’t figure out how to go through the building without backtracking a quarter of a mile and someone personally escorted us through the building.  Everyone held the door open for us.

We drove to Ann Arbor and got there by lunchtime.  We tried to book a hotel on campus, but by the time we decided, it was full so we stayed at a suburban Hyatt.  The boys ubered (lyft-ed) into campus to start the engineering tour.  We didn’t quite realize it would be a two hour tour with safety glasses. 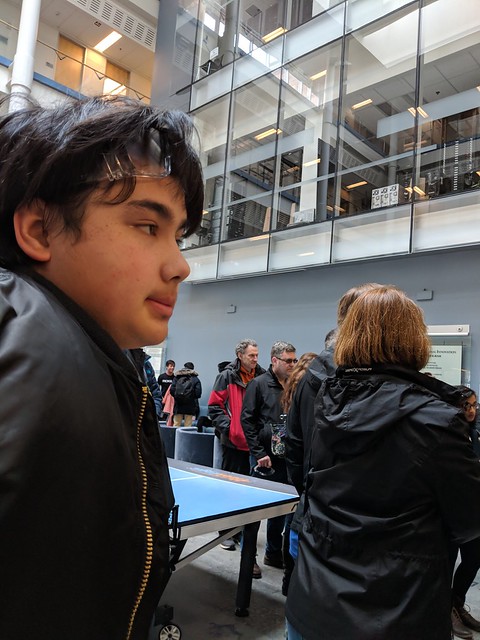 I know that UM is enormous, but I didn’t quite realize how enormous is enormous.  The engineering campus is not even on the main campus – it’s on something called the North Campus which is a 10 minute shuttle ride from the main campus.  The shuttle crosses a river, a highway & various wooded areas. 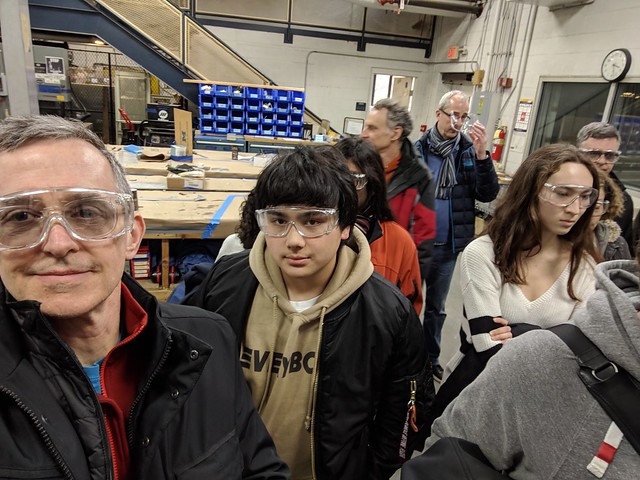 It is not on the main campus because they have enormous stuff like in the photo below which is a room to build a bridge/building/railway/whatever and shake it like it is in an indoor earthquake. 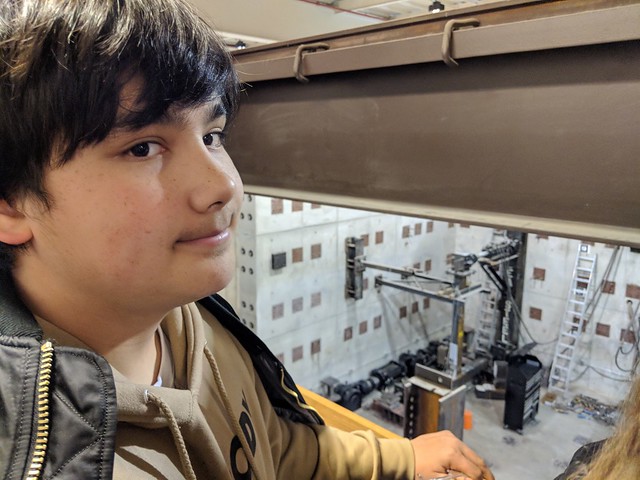 The solar car (below) has come in 2nd in the world solar car competition for three years running.  They always come in 2nd to the Netherlands?  Jeremy told me that they said if you are on the main team and travel with it, you take a term off and do it full time.  The UM tour guide was a MechE from California and Jeremy asked why he didn’t go to a UC school.  The guide said that the thought the UC schools were had a more competitive atmosphere and had less money for support – he had a lot of friends from home go past the regular 4 years because there wasn’t enough space for them to take required classes and that that never happened at UM. 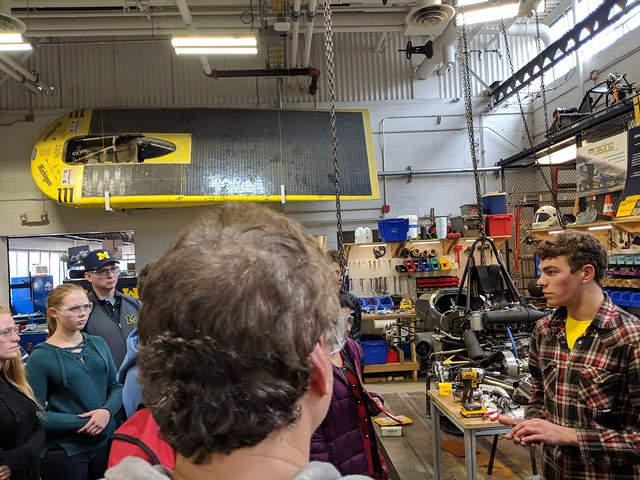 While the boys were engineering, Edda and I stayed in the suburbs where the parking is easy.  We went to an independent bookstore. 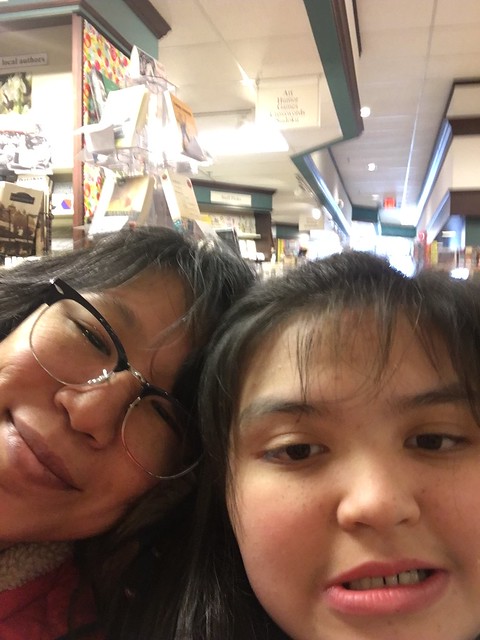 And a quilting store. 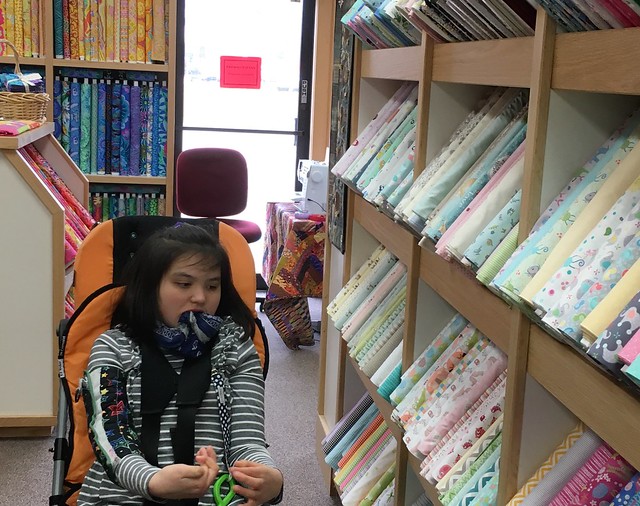 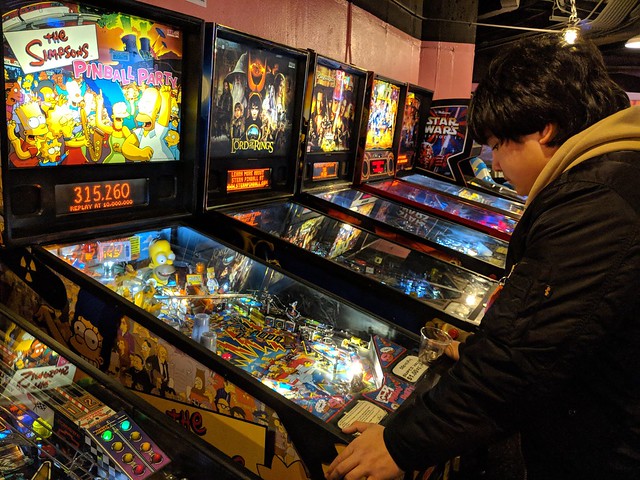 I will say Wed evening was the low point of the trip, the part of the trip where we started getting on each other’s nerves.  I think it was because Thursday we were still going to be in Ann Arbor another night, our tentative arrangements with friends fell through and it was going to be cold and rainy and we had no plans.  We needed some alone time.  So Thursday morning, Vince went to the mall, Jeremy took a spin class and Edda and I stayed in the hotel room quilting.  We were all better by the afternoon where we went to the Ford museum of American innovation which was a nice, warm, dry indoor space for Edda to walk around in and for us to separate and reconvene for a few hours as we wanted each other’s company.  It was a nice, but odd museum.  There was the Rosa Parks bus, the Kennedy presidential car, and lots of sewing machines & steam engines. 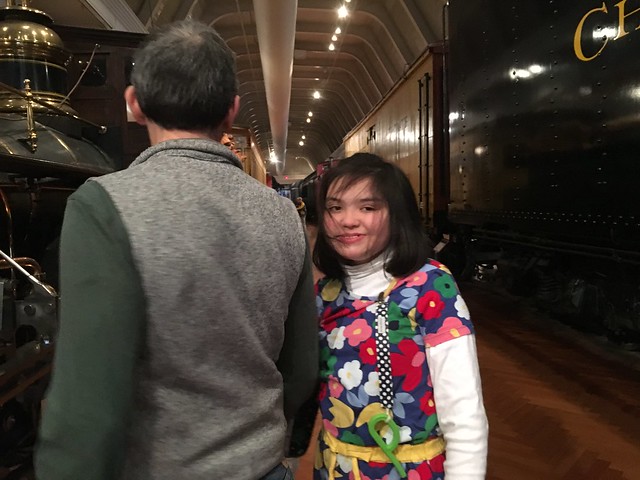 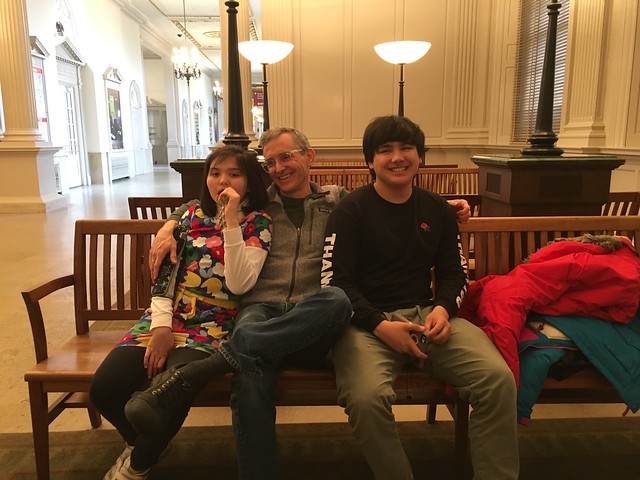 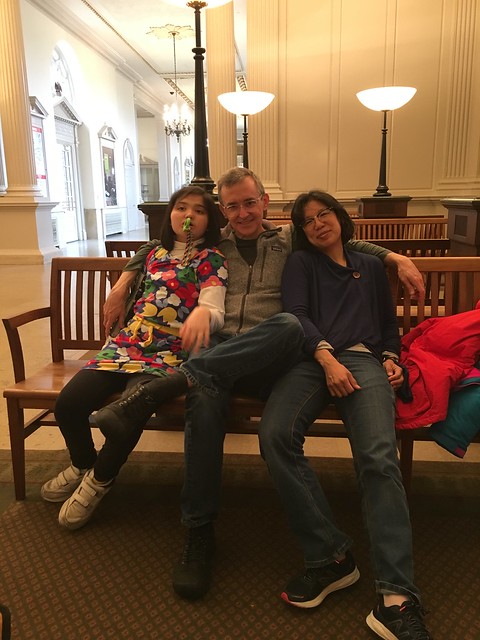 Now we are home.  The house is still in pancake breakfast configuration with all the furniture pushed out of the way.  Jeremy drove 8 hours and we have a few more days of spring break before we go back to the regular regular.