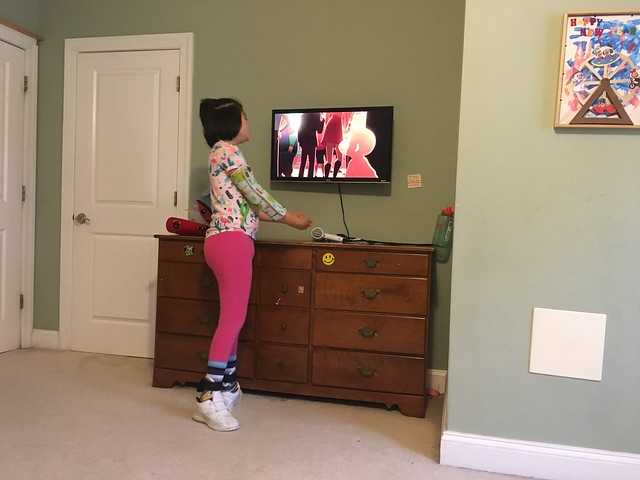 The kids are home today, causing a slight bump in the tight logistical ship we are running here in Maryland.  It is the Jewish new year, but MCPS marks it on the calendar as simply a non-instructional day for teachers and students.  When I was a kid, they just straight up called it Rosh Hashanah leading me to be confused as to what exactly was happening that day, but I’m sure I was happy with a day off from school.

I’m feeling behind on a lot of things including this blog, but I’m trying to not let it bother me, we just keep on going.  Everyone is well, we are all doing our things.

Jeremy’s weekends have been transformed.  I’m not home a lot of weekends now, so he’s managing the family and errand running.  And a lot of alone-ish time, that’s new for him.   It’s a complicated thing we had going on the weekends even before this nursing thing, we usually alternated going out of the house so at least one of us could mind Edda, we are very rarely out of the house together without Edda. We have some Edda-care on the weekends, but Vince helps out a bunch so Jeremy can go grocery shopping without having to take Edda and her wheelchair.  Jeremy booked his first business trip in October, hopefully we’ll be able to swing that without too much trouble.

Vince hosted parties on both Friday night and Saturday night in the house.  It was lively both nights when I was trying to go to sleep early.  He’s gearing up for a busy year.  I still haven’t figured out how to log into the grade-checking system.  He says his dream school is Carnegie Mellon, he told me his whole plan of what he needs to do to get in, and I think if he pulls it off, it would be a pretty good application.  He has a good friend who also wants to go, they are going to go to the information session in Bethesda together later in the month.  I’m such a pessimist, I can tell I’m not doing this parenting part right.  There is going to be probably one kid from RM from his class going to Carnegie Mellon that, to me, is a long shot.  Jeremy asks me why it can’t be Vince, and I shrug.

As for Edda, it took me until today to think about her high school situation and back to school night when I was telling Vickey about it on the phone.  Emotionally, it’s a bummer for me that she’s in high school.  She’s in a school community based program which means that they are prepping them, not a high school diploma, rather for work in the community.  I just can’t imagine Edda ever working anywhere, but I’m getting this idea that Edda has to have a job from various sources and it’s upsetting to me.  The jobs that the kids are doing are things like collecting recycling in the school or going to a job site to shred paper or sort items.  I think some of the kids in Edda’s program can do this and when I first understood that Edda was delayed in some major way but I didn’t know yet that it was Rett Syndrome, I remember thinking of her being a housekeeper somewhere and thinking that that was a terrible thing, but now I wish she could use her body well enough to be a housekeeper or to stock shelves or to mow a lawn.  How nice would that be?  To be able to go to work and do a useful thing.  Anyways, I’m sure this is coming out all garbled, but it’s hard for me to think of Edda as an adult, but now that she’s in high school, we all are focused on her adult-ness when on the day she turns 21 and ages out of the school system into adult programs.  Also, the program expanded from two classrooms with two teachers to three classrooms and three teachers.  Edda rotates throughout the day among the three classrooms.  But to accommodate the expansion, one of the classrooms (the one manned by our main point of contact and Edda’s teacher/case manager) was a storage room last year with no windows.  Vickey was like – Edda’s classroom is an old storage room?!  I was like – huh, I didn’t really think about it that way.  I was just telling Vickey about it because they had to empty the storage room just last week and it’s not yet decorated or equipped with a Promethean board.  So that is hard, to move from a newly built middle school where there was a whole special needs wing in the front of the school with kitchen and laundry and bathroom facilities to, um, a repurposed storage room?  I know not everything is in the fanciness of the building, for example, the teachers made it a point to let us know that, at lunch, instead of grouping the kids at the edge of the room to have their lunch, they are all seated in the center of the cafeteria with the typical kids bustling around them.  There was a plan to demolish the school and rebuild it, but the funds got re-allocated at the last minute to building a new high school not far from here where there is a huge expansion of housing.  So that is that.  Edda, of course, is fine with it all.

As for me, I’m still slightly drowning with my new schedule.  I’m almost on my own with my own patients, I think that’ll be next week.  It’s become clear to me that I will not know everything I need to know when I go off orientation, but I’m OK with that.  So many things I don’t know: how to change a wound vac, how to take blood from a medi-port, how to compensate for fluid overload when you are transfusing blood, how to follow up on a delayed midline insertion, how to speak Spanish.  There is never a dull moment at work, the hours pass extremely quickly.  On Saturday, I had a nursing student following me around for 3 hours which seemed incredibly ridiculous to me because it implied that I was capable of teaching her something.  I actually had to apologize to her and tell her I wasn’t ignoring her and I wanted to talk small talk with her about her big nursing dreams, but at that moment, I was using all of my brain cells to manage the 9 am morning shift report / vitals / assessments / morning medications and I couldn’t spare any extra for diversion for small talk.  Once I start doing small talk, I can’t fully concentrate on the task at hand.  I’m getting used to having many “Sunday” nights.  You know, the night before you have to go to work for the first time after having a day off.  I used to always insist on having a quiet Sunday night, but I can’t have that anymore.  I’m also trying pretty hard to protect some “down” days.  I’m working a lot and I could work everyday if I wanted to, but I’m trying to insist on myself having some protected time off – which, to me, means no socializing past the family members, no catching up on housekeeping or bills or various errands and no working (obvs.).  Just watching tv or reading, blogging, or crafting.  I think if I threw a load of laundry in there somewhere, it would be OK. 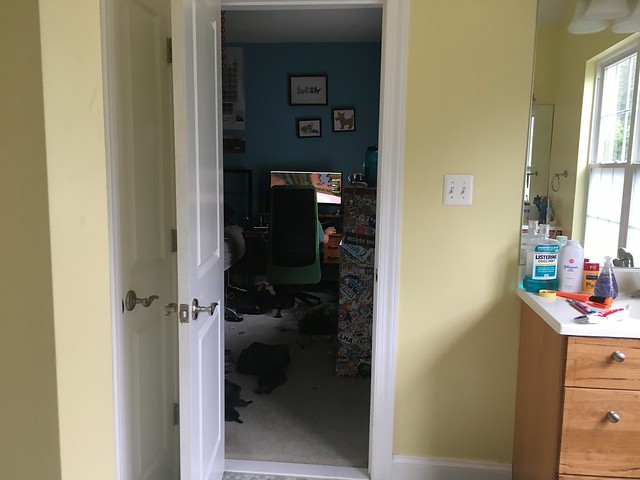 One thought on “updating.”