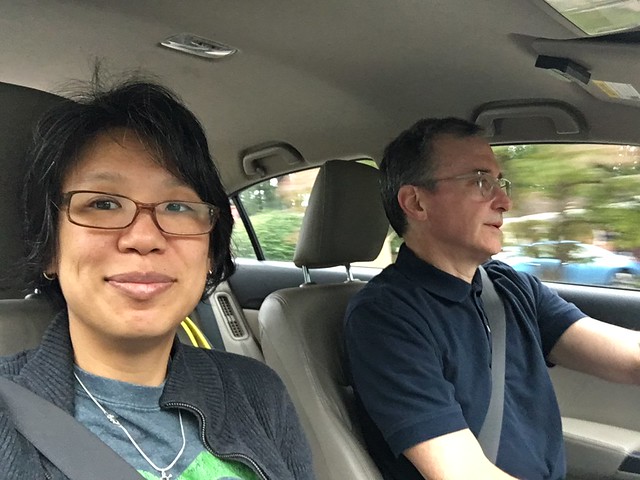 We went to Edda’s IEP meeting this morning.  This was the first meeting with her new team at the high school.  These folks have been working with Edda for about 5-6 weeks now, so they are learning about Edda’s strengths and quirks.  (She hates art.) We signed a piece of paper which said that Edda was not going to get a high school diploma, rather she was going to get a certificate of completion, the form also said that she would get modified standard assessments.  Both of those were fine, I’m at peace with not getting a high school diploma.  They crossed out the two other options on the form, one was consenting to the use of restraints and the other was the use of isolation.  You know, Rett Syndrome sucks and everything would be so much better if Edda didn’t have Rett Syndrome, but it’s also kind of like – oh, thank goodness we are not in the restraint/isolation-procedures-at-school territory.  They tried to cut some services, we (meaning Jeremy) gently held our ground.  At the end of the meeting, the transition specialist came to talk to us about adult services.  Edda’s going to be able to go to high school until she’s 21.  And then we enter the world of adult services – something that is daunting, but will happen as sure as time marches on.  They are trying to help us along, even though I don’t want to think about it at all.  The transition person said that our goal for the next couple of years should be to just go to various community meetings that discuss DDA services and financial planning and other things (demystifying Medicaid! exciting.) offered by various organizations and not really do anything else, so by the time you’ve heard it 3-4 times, one will be over the denial and ready to do something.

Ever since I lived in Austin, I have a soft spot in my heart for country music.  I’ve been liking this song recently.

Do you know how many times a day I’m asked at the hospital where I’m from?  Like 17,000.  Hey Doris – where are you from?  Usually it’s a patient, but sometimes it’s staff.  I know lots of Asian people hate this question, but really, I don’t mind if it’s asked with the right tone and usually it is.  Though I do like messing with them.  I first tell them “I was born in Baltimore.” which is true but entirely unsatisfying to the question asker.  Then they look at me, head tilted trying to figure out how to rephrase the question (but I like to stop them before they ask, no, I mean where are you really from? To which the true answer would be – “I’m really from Rockville”, which probably is even more unsatisfying than the Baltimore line) and then I say, “you know, I’m consider myself American, but my parents were born in China.  And then they say, ahh, China!  I hope I represent all of China well.

Vince stayed home sick today.  He’s congested and everything.  Booo.  Tomorrow is the PSATs.  He will have to go into it at less than 100%.   I’ve been trying to get Vince to read more NYT articles out loud to me to bring his youtube dominated youth experience up to SAT level reading (with spotty success).  He gets to pick the article.  So we skip over all the political articles and head on over to the articles about the pot-smoking dad or animals freed from animal cracker jail.  The other day, he read an article about the Instant Pot and came across this line: “After the rice and shrimp had cooked for a mere three minutes, Ms. Ram twisted the vent, which sent forth a rush of spicy vapor with a companionable whoosh.”  Vince totally stopped at that line (after stumbling over “mere” and “companionable”) and declared it was too pretentious to continue.   It’s about the Instant Pot, a completely non-pretentious thing and turned it into something it’s not.  I’m like- the NYTimes is nothing if not pretentious, keep going!   By the way, we did get an Instant Pot the other day after our slow cooker died, and I took it on it’s maiden voyage where I managed to not only cook the frozen block of chicken, but accidentally managed to pressure cook the weird absorbent pad is often stuck to the bottom of a package of frozen chicken thighs.  Whoops, hopefully not too much polymer ingested.

One thought on “IEP, I’m from Baltimore, Vince is sick.”