A hard & complicated shift on Friday.  Sigh.  Vince has been working on the winter play at school, so I picked him up on the way home at 9 pm.  I was tired (of course) and the first thing he asked was – did anyone yell at you?  I said, no – no one yelled at me, so at least I had that going for me.  I have no idea what complicated system they have going on with pharmacy downstairs – I’m sure it’s full of computer-ish circles of hell, but I have a patient fresh from surgery and I can see that the pain meds are ordered, but I can’t pull them out of the med room for 2 hours because pharmacy hasn’t verified them.  I call every 30 minutes.  Not only is the patient sitting there with surgical pain which is terrible for me to think about, it makes me look bad when my patient asks – hey you got anything for this pain? I’m like – ummmm, no – not exactly.  They think I’m not paying attention or I’m making them wait.  Any explanation about pharmacy sounds totally lame and incomprehensible because it’s like – don’t you stock ibuprofen by the pound?  And the answer is, of course, the ibuprofen, oxy, morphine, percocet is all like 10 feet away from us, but I can’t get to it.  Then whenever I pass a coworker I ask – you struggling with pharmacy today?  I hear a resounding Yes – I’m on the phone with them right now. I lean over and see on their computer all the red angry boxes on their MAR meaning missed doses of medication.

We are wrestling with a big blister on one of Edda’s toes.  It was caused by me.  Her toes are curling in a weird way in her AFOs and I wanted to straighten them out because I flip out thinking that Edda won’t be able to walk when she’s 25 because she’s got curly, painful toes.  I put on these little flexible bunion straighteners (which I use all the time myself when I run to keep my own toes aligned) and she seemed to tolerate them well for a week or so (and I thought her toes were straighter) until Eliana noticed huge blisters on the sides of both her pinky toes. (I love all my caregivers, but Eliana is especially good at noticing Edda’s facial expressions.  I give Eliana credit for potty training Edda for #2 which is a huge deal.)  We lanced the blisters and one is healing great, but the other is an oozy, bloody mess.  And it’s a terrible thing to bandage because how do you bandage the inside side of a pinky toe when you are walking on it all the time?  Bandage after expensive bandage wouldn’t stay put.  On Thursday, I ended up not working very much because I was sitting next to Edda watching TV with her blister open to the air and foot propped up on a laundry basket.  She won’t stay that way unless I’m right next to her.  I did nap a bit.  I’d look at it every hour to see if I could see any new skin.  (No.  I could not.) Jeremy’s like – it looks bad and I’m like – oh, I think it looks OK. Together we put together a good bandaging system that’ll stay on and keep it covered.  It involves a lot of tape.  Hopefully, it’ll keep looking better day after day.  Fingers crossed.

We are also so confused about Edda’s diapering situation.  Normally, I think Edda is consistently dehydrated.  Not that she refuses water, but we can be a little lame giving her water.  One has to patient with these things – straws, sips, etc.   Anyways, this is to say that while she does pee enough, she doesn’t pee a lot.  But on Friday, she went through two sets of pants at school – they changed her twice before they even got to lunch.  Then the aftercare says she came to them completely wet.  We are dumbfounded.  How can this girl produce so much pee?  I mean, sometimes on the weekend, we’re extra forgetful (probably more me) and she’ll happily wear a diaper for 7 or 8 hours and it’ll be heavy, but really, completely reasonable. Maybe she’s getting a diaper wedgie?  Where the diaper is still dry, but the pants are wet because you missed covering the most important part?  I dunno.

Earlier this week, Vince asked if he could host a “big” party on Friday night.  He wanted to invite friends from the play over.  Normally, there is a cast & crew party after closing night, but there is a pretty strong split between cast/crew, and Vince wanted to host a crew party.  We asked how many people would show up and Vince said probably between 10-20.  We agreed, we warned our downstairs tenants and things started to swing into place.  (Mostly meaning Jeremy made wings, yum).

I came home at 9 pm with Vince who cut out early from the play with Sam to set things up for the party.  The grown ups went upstairs, Edda was asleep.  At 10 pm, the guests started to arrive.  The doorbell rang, Max went crazy and barked her head off and then we could hear everyone say hello to each other.  Then Jeremy and I looked at each other – girls!  there are girls in the house at a party!  After about 20 minutes when more guests came, Jeremy and I discussed whether we were suppose to go downstairs to say hello or if we should stay upstairs the whole time.  We decided to go down stairs and satify our curiosity. 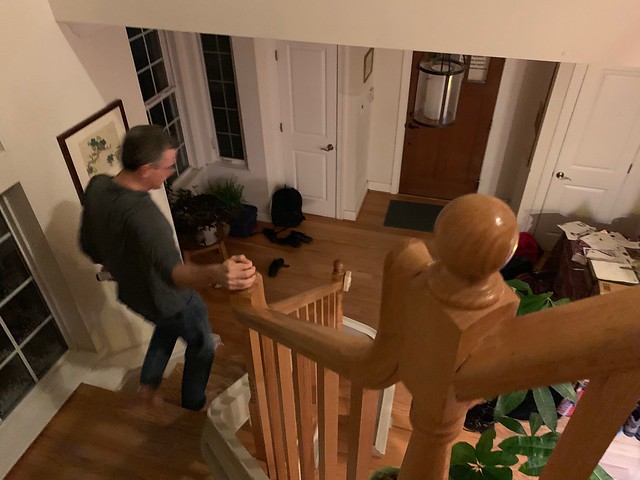 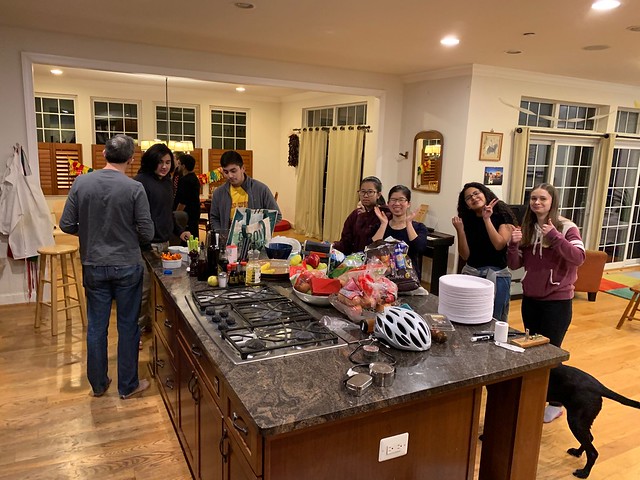 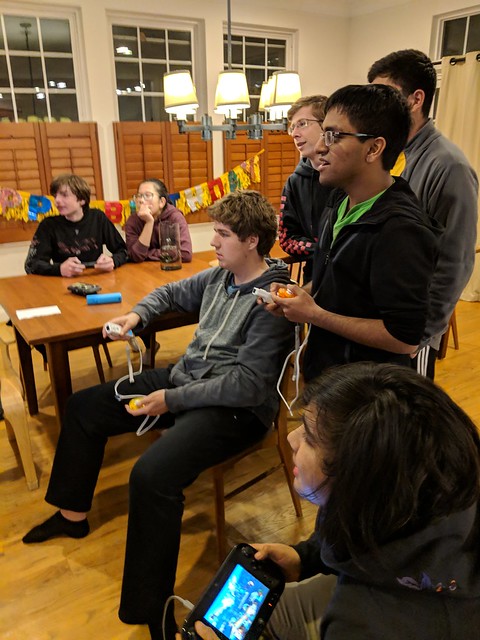 I’m semi-hiding behind the pantry, unsure if I’m suppose to be at the party.  We didn’t stay long, we went back upstairs after about 5 minutes.  Kept the door to our room open and the lights in our room on and then proceeded to fall half-asleep in our clothes (in case we needed to spring into action) while the party went on downstairs.  Vince had promised to have a soft ending at midnight and 80% of the kids were gone by then, but it was pretty loud for about 2 hours.  In my half-sleep, I told Jeremy that this was terrible for me because I was going to be so underslept and  grouchy the next day, but Jeremy mumbled, yeah, but this is a milestone for Vince and it sounds like a great party.  At 12:15 am, we shuffled downstairs to encourage the stragglers to go home and packed up the food.  Vince had managed to order pizza online, there was a Costco chocolate cake, lots of chips – we wanted to make sure Max ate none of it.   After all the guests had left, Vince came upstairs and gave us big hugs and thanked us for allowing the party to happen.  You guys are the best parents ever! Can I say that I live to hear that?  I asked was it a good party? and he said, yeah, it was the best. 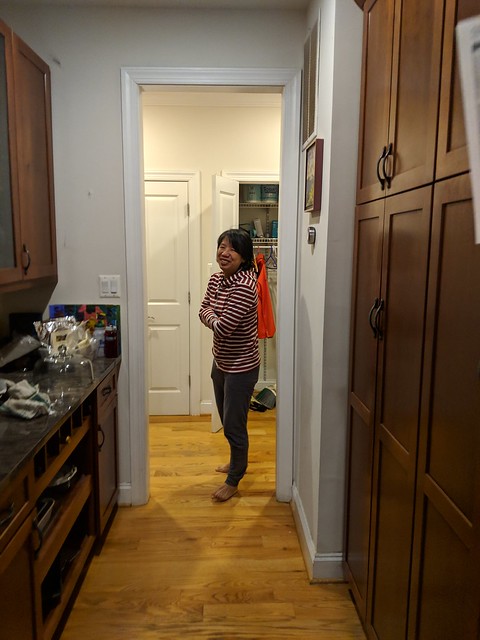