Well, that was a crappy weekend shift.  Sundays are always terrible at the hospital for whatever reason.  The regular charge nurses are usually not working, so it’s the most senior nurse running the show (which is generally fine, I get along with them well), but Sundays bring out weirdness in everyone.  I think I’m past the grace period given to new nurses by the other nurses on the unit and now it seems like it’s OK to yell at me for missing something during my shift or to do the other, maybe more annoying thing, of pretending to be helpful and offer advice and/or correction, but is basically is a snarky way of telling me that they would have been more competent at my job than I was.  Anyways, it’s depressing how predictable this well worn path is, I’m perfectly capable of stepping out of it and saying, oh yes, this is the next thing that happens in the first year.  But it doesn’t mean my feelings aren’t hurt by it all.  When these things happen at the end of the weekend, when I’m fully exhausted and tapped out it’s not easy to maintain my emotions.  This is definitely Type II fun.  I’m grateful it’s not my main source of income as I can frame this everyday as choosing to go to work as opposed to forced to go to work.  I am learning a lot and mostly like it.  And I’m hyper focused on the end date of my year-long experiment (five months to go!).  I do want to say that generally, I think the unit is very supportive.  I’ve been in enough work environments with enough bosses and coworkers to understand that this unit is probably as good as it gets.  No one has quit since I’ve been hired (except for one person who had to move to Florida), that kind of staff stability says something I think.  You can’t throw 40 nurses together in a stressful, tiring situation where at least half the people are working at night and not sleeping like a normal person and not have conflict.  Also, I’m pleased to have negotiated a fixed schedule which will hopefully start in four weeks which will bring order back into my life and I’m very much looking forward to it.  Anyways, time just passes and I just show up and see what happens.  Sometimes it’s magic (I’ve realized the best compliment in nursing from a patient is – will you be back tomorrow? and this happens to me often & I feel very lucky to be asked that) and sometimes it’s crap.  Like literal crap.  Most days it a good mix of both.  It is entirely too much work for hourly pay that is only a little bit higher than you’d pay for a babysitter on Saturday night, you cannot expect that anyone will stay a long time at bedside.  Which is too bad because it’s also clear to me that it takes at least two years to have enough experience to deal with a lot of things.  It’s painful for me to think that the whole country is delivering care in hospitals in this manner – with tired and exhausted (and inexperienced) personnel.   Though I intellectually understood this before, it is entirely a different thing to live it.  (The doctors are tired too.  And the pharmacists.  And the PT/OT staff.  And the social workers and case managers. And it goes on and on.  And it is true, they care the most about turning over the beds.  Just like at restaurants and their tables.)

A run of hard shifts is harder when my support system is also on the go.  Jeremy and Vince were out all weekend doing a wilderness emergency first-aid course required for the scout trip this summer.  And now Jeremy is in Florida on business.  Which means that we are going to talk very little this week. Vickey, my other frequent confidant, is also traveling so it means that I’m without a good venting partner for a stretch of time here.  Then I lean on Vince who tries to be supportive, though understandably not so fond, of his emotionally needy mother.    So that’s not great.  Why do I do this to myself?  I could instead go on vacation.  When I have a tiring and emotional shift and want to quit, Jeremy says – ah, you love it, I can tell you love it, you are going to figure it out and do it for years.  You just wait and see.  Vince says – eh, just keep going.  It’ll be fine.

Jeremy and Vince were away all weekend (all weekend meaning 7:30 am to 9:30 pm both Sat and Sun) in Frederick for first aid training for Philmont.  They need two people per group to have this training and Vince and Jeremy are doing it together.  I asked if it needed to be two grown ups and Jeremy said that you just needed to be 16.  From Jeremy’s report, Vince has a talent for this stuff.  Last year, when V was a camp counselor, a kid broke his arm while riding a mountain bike and Vince splint his arm and helped him out of the woods.  So this year, at the training, Vince took it quite seriously and performed competently enough at the practicing that when they did the final mass casualty scenario at the very end, they all voted for Vince to be the leader.  Today, at school, Vince was carrying around the emergency first aid booklet at school. There are only a few life threatening things you can do things for out in the wilderness.  Hmm, they are bleeding, sucking chest wound and a flail chest.  All the cardiac stuff is pretty much pointless if you are out there in the woods – the instructors basically said if you can’t get the person to the hospital quickly that it’s just pointless to start CPR since there is such a low chance of success.  Though they did point out emotionally, if a kid’s dad has goes into cardiac arrest and the kid is standing there watching his father die, you do the CPR enthusiastically for thirty minutes. 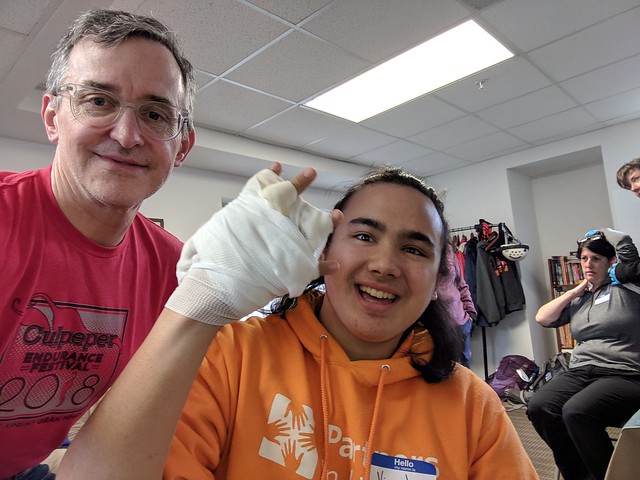 I asked him today if he was sure that he didn’t want to be a doc (maybe an ER doc?, though I hesitate to ask because I honestly would not wish doctorhood on anyone). He said, nah, he’d be interested in being an EMT. 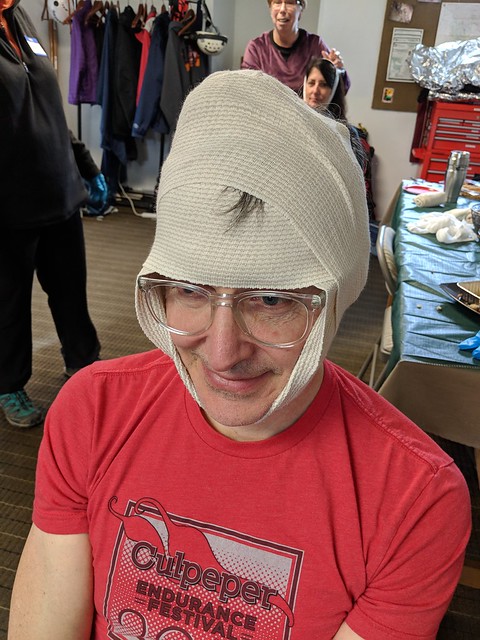 More college talk?  OK! Jeremy thought we should take Cal Poly off the list because it’s the least diverse of all the public CA colleges.  That there were some racial incidents that happened in the last few years (though these days I’m not sure any college campus has been free from these incidents).  Vince said Vanderbilt just sounds too fancy – though I argued that Nashville sounded like a cool town. Then Vince asked about Caltech and whether it was a public school.  I said it’s private, but that I didn’t think he should go there.  Jeremy asked why and I said I generally disapproved of a school that didn’t have affirmative action and besides, Caltech is just weird.  We looked at Caltech’s demographics – it’s half Asian and probably there are more half-Asians there than there are African-Americans.  Then Jeremy added – I don’t think you can go there because you pretty much have to get an 800 on the math SAT to be admitted.  Vince promptly replied that he was sure he could get an 800 on the SAT math which then reminded me of this recent NYT article on the differences between boys and girls in school.  What about Georgia Tech or RPI, I asked?  Vince didn’t like Troy that much and Jeremy thought a technical school might be too limiting – not only in terms of what to study (Jeremy suspects that Vince might end up studying something other than science/engineering), but even if you were an engineer, wouldn’t you want to have friends who weren’t engineers?  Jeremy asked.  I think engineers make good friends. 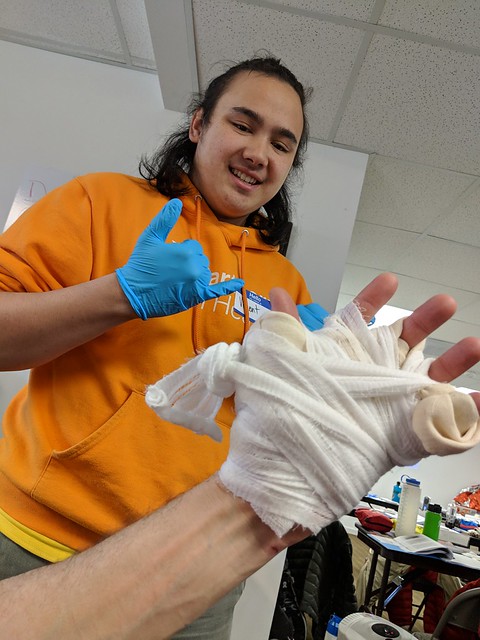 This is amazing Cardi B.  I love you.