Snow today!  Lucky for me (though not lucky for the kids – or at least Vince), there was no delay and everyone went off to school just fine. 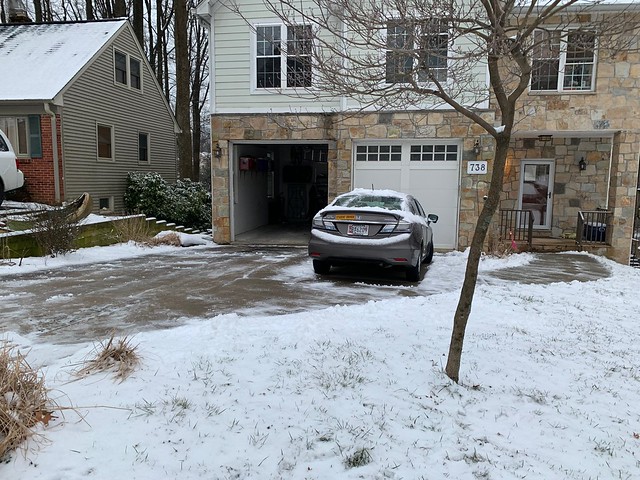 It was career day at RM and Jeremy volunteered to talk about his work life.  It was a half day at school, so he did his little speech seven times today.  He included everything including his stints as a cook at a French restaurant and fixing computers at a law firm both in Philly.  He mentioned that he was Vince’s dad so Vince had a lot of people come up to him saying – your dad spoke in chem class today!  That was fun for Vince.  Some people asked personal questions like why Edda went to Wootton and not RM.  Jeremy said that one of the messages he wanted to tell kids is that sometimes you take a job in a particular city, not because you always dreamed to be a semiconductor engineer, but because you have a girlfriend who lives in that city and someday you want to marry her.  Awww, what a sweetheart!  I’m not sure I would have married Jeremy if he had taken a job in another city.  Jeremy had to really talk me into a long distance relationship for a year between LA and San Jose.  Jeremy is very loyal.  I’m less so.  Jeremy also bumped into another dad at the career expo who was a grad student at Northwestern with Anne M*yes (my MIT senior thesis advisor).  The other dad works at NIST now where Anne did a lot of her measurements while I was her advisee.  He said his most cited papers are co-authored with Anne and he actually thought he didn’t deserve to be a co-author, but Anne graciously included him.  Ah, Anne!  I’m hoping to go to my 25th reunion this June, Vince will come too – I’m excited to go and run down the infinite corridor in the middle of the night (well, maybe at 8 pm).  I haven’t been back in so long.  It should be both fun and a bummer – Anne is dead, my dorm has been shuttered.

We are working through Spiderman into the spiderverse about 15 minutes every night.  This is much better than flipping through youtube to find something we can all agree on.