It’s 90 degrees outside and Vince insists on wearing a 100% polyester button down white dress shirt and jeans! Why? Why? Why? Can you tell he took the scissors to his hair again? A big chunk is missing from the front. Ack.

And look, a photo of Edda, straight at the camera, no hand in mouth and a big smile. How cute is that! We had diner at Chevy’s where they served us huge margaritas. He just turned 21! woo hoo! I promptly had to leave to go climbing where Ronnie came to climb! Hooray! Of course, those in the know, know it’s not a big deal since Ronnie came climbing with us last week. 😉 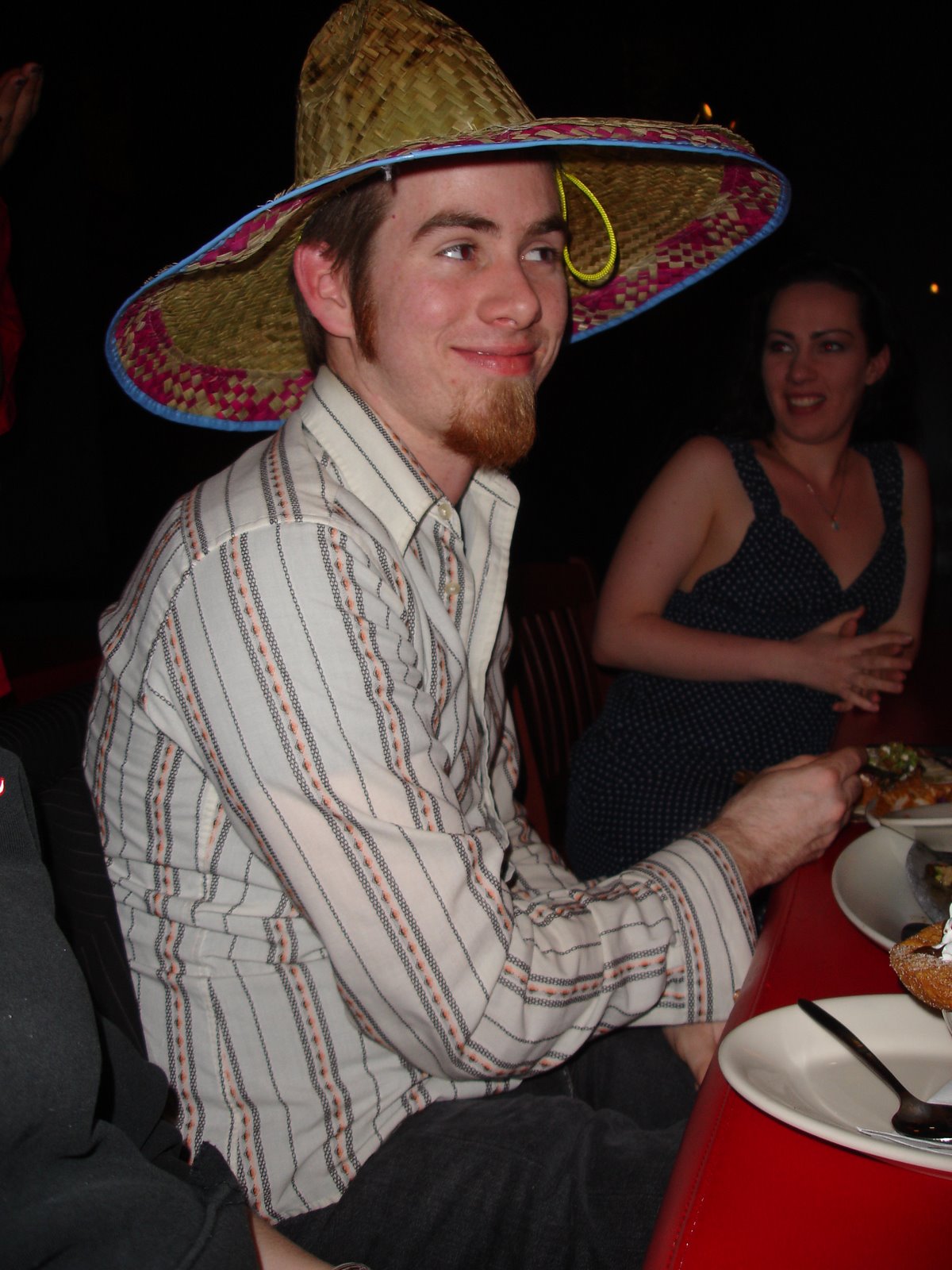 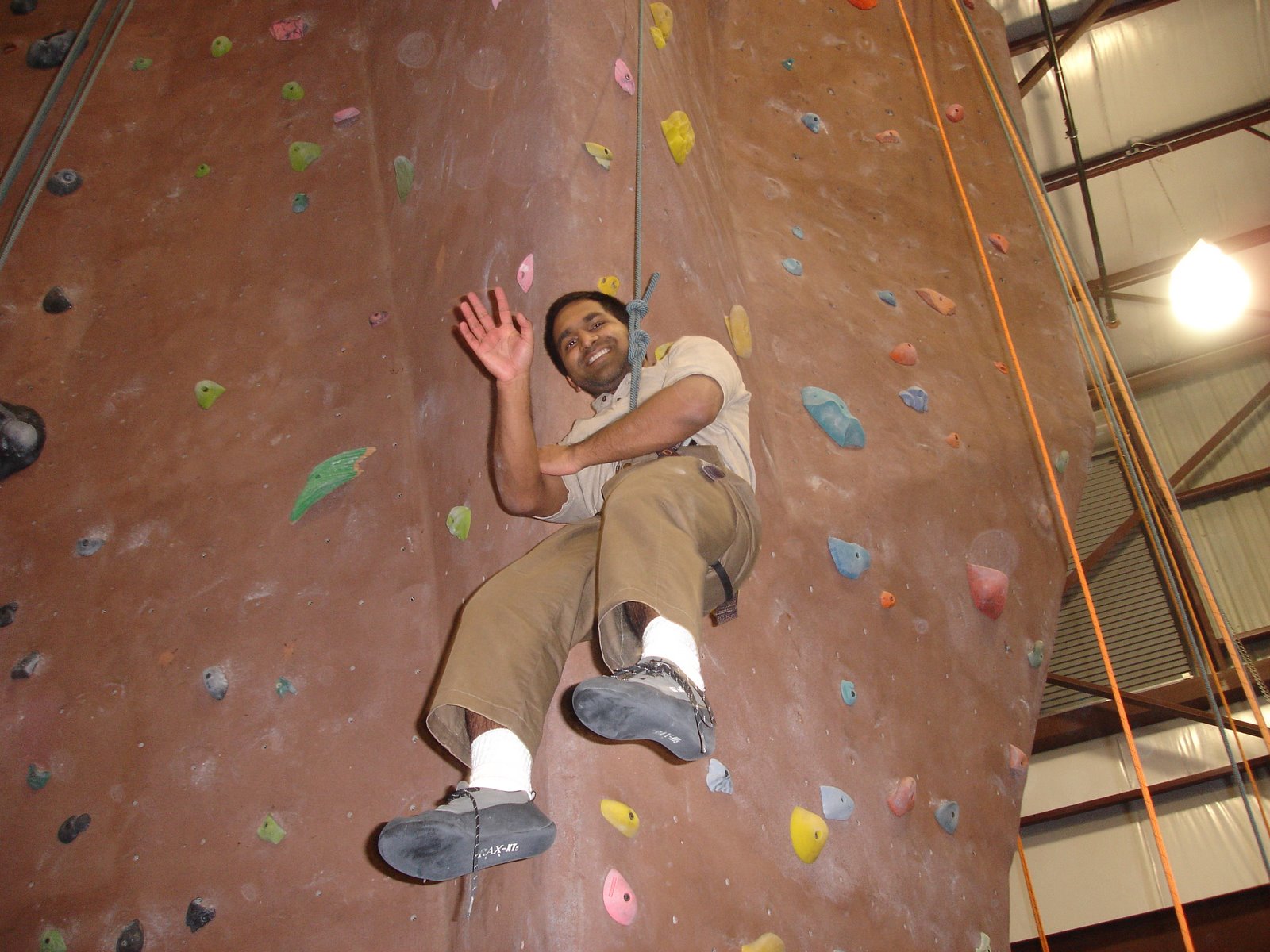 I’ve spent the past few days working on putting together a Rett Syndrome forum. I hope that I can nurture it to grow into the support network that I want it to be! Please come on over and take a look! I’m getting excited about moving. So excited that I can’t sleep at night. Maybe I should take one of those melatonin I’ve been giving Edda. It was a good night. I enjoyed myself. I made a pact with myself that I would actaully go out there and ask some random people to dance. It was fine, tho I stayed away from the really good dancers and/or the smokin’ hot ones. Ha!

Mike, Betty, Pei-Yean, & Pei-Sun showed up. Pei-Sun got jacked since they wouldn’t let her stand around and watch, so she had to pay $15 to take the beginning lesson with Pei-Yean and Mike. The funny thing is that thru the whole beginning class, Mike was like “I know you and you know me” to Pei-Sun, since they had met climbing. But I guess Pei-Sun couldn’t quite place Mike until after the class had ended – basically a hour later! Laff.

Pei-Yean did alright. They didn’t get to lindy hopping in the beginning class, but I danced with her a little bit east coast style, and it was fun. At least I had fun. 😛

While everyone was in the beginning class, I was looking on to the advanced class that did a bunch of footwork styling for the swing out. It was interesting.. I’ll have to practice some of that. Choon, I think you would have enjoyed that class.

One of the aunties at Edda’s school who participated in the durian feast surprised me with a gift of mangosteens. The red part is the peel and you eat the white wedges. I like mangosteens, they are sweet and citrus-y. Durian is referred to as the “king of fruits” and mangosteens are the “queen of fruits”. You are suppose to eat them together because durians are heat-y and mangosteens are cooling and thus cancel each other out. Kind of like when you counter the bag of Doritos with a diet Coke. It’s like you ate nothing at all! Grrr… we are getting on each others nerves today. I hope tomorrow is better. Good night! In honor of World Shutdown Day, Jeremy and I removed our permanently bent fingertips from our laptop keyboards for a full 24 hours and went out and did some “real life” living – so no blog post yesterday. Thankfully, we used the time to relearn how to talk to each other using our mouths instead of IMing each other from across the room.

Edda had her birthday party at her school today. She fell asleep during the first part, but perked up when the cake appeared. There were 6 birthdays in Edda’s and Vince’s class this month and thank goodness we are through with all of them. I’m am totally birthday-ed out – no more wrapping of gifts or eating of delicious cake at 10 in the morning.

I also made good on my promise to eat durian before I left Singapore. Durian is a tropical fruit that smells totally disgusting – it’s not allowed in public buildings or on the subway, but many people swear it’s their favorite thing in the world. I’ve smelled it many times, but I’ve never tasted it. Someone said it’s like a taste of heaven in the middle of an open sewer. Some of Edda’s teachers said that they looooooooovvvvvveee durian, so last night I went to the neighborhood durian stand and asked the uncle for the most expensive one. I spent $15S on a 1.5 kilo durian. I brought it home and Jeremy wouldn’t allow it in the house. It spent the night suspended on a bicycle handlebar on the patio. By morning, our patio (which is open air) did smell like an open sewer.

After Edda’s birthday party, Jeremy and the kids high-tailed it to McDonald’s and we gathered a bunch of teachers (outside near the playground) – including the principal and the vice principal to gather around and eat a lobe of this fruit. So what does it taste like? Really, really awful. Terrible. It’s creamy and nutty and caramel-ly and also kind of seaweed-y. All this while smelling incredibly awful, but people around me were complementing the wonderful aroma. I could really only eat one bite, and the rest I gave to all the folks around me who were in ecstasy. They kept trying to get me to eat more because they felt like they were being too greedy with their portions. No thank you! Really, you can have the rest! Then you are suppose to drink saltwater from the rind to get rid of the heaty-ness. Whatever that is. You can’t get too heaty around here. Well. I suppose it’s official that I’ve made my first friend off of match.com. Woo hoo! Excellent. Those of you who rock climb or salsa will possibly meet her in the near future. 🙂

It was a good weekend. Everyone took me out to Go-Kart racing on Saturday. Thanks Tahera for organizing. It was her first evite ever! Later on in the evening, Mike and Dung and Ray took me out to shoot my first ever 9 hole round of real golf. Gawd damn it’s a lot harder than it looks. It was an all par 3 course, and my first few scores were 8,7,7,6 I think. Tho I did make this beautiful tee shot on the 9th hole. Right on the green about 8 ft from the pin. The cool thing was that the green was surrounded by water on 2 sides.

Also dinner tonight hosted by Yi-Ling and her newly remodeled kitchen. It was fun as the topic was of course, dating, guys, eHarmony, match and various stuff. It seemed that the women did all the talking, and the guys listened. 😛