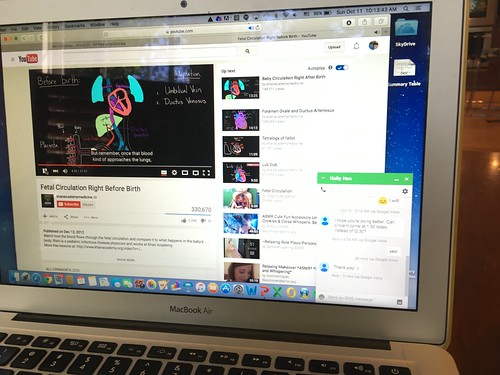 I think if youtube existed when I was in college, I would have managed to solve some differential equation problems.  Lecture was all theory, problem sets were not and I didn’t understand and didn’t care about the theory.  I just wanted someone to show me how to do the problems; I probably should have asked someone how to do the problems, but I was shyer than I am now, more embarrassed to admit I don’t understand something.  But I will say this now:  I do not know differential equations.  And I blame it all on those damn theory based lectures which I slept through. I’m sure the khan academy has a whole series of videos with people solving all kinds of differential equation questions.

I spent the day learning about fetal circulation.  My clinical OB experience has been good, but it’s left me melancholy.   So many lectures about preterm labor, fetal screening, maternal blood screening which I thought I wouldn’t be sad about, but I am.   Why is an amino done at 16-18 weeks gestation? The reason given in class is because that’s when there is enough amniotic fluid to pull out without damaging the fetus.  Which is true, but why not at 21 weeks?  Not a whisper about how one would be pressing up against the legal limit in many states for a late term abortion.  We are traveling through all of OB class without talking about abortion which amazes me.

My hospital clinical rotation is essentially over.  Labor and delivery is a very desirable placement for new nursing grads and I can see why.  It’s not only because babies are so cute and lovable which is why I initially thought so many people are drawn to it.  It’s because it’s really easy to take care of women in the prime of their lives doing something that is suppose to happen pretty naturally.  It’s a world away from the floor below where I did my med-surg rotation where the patient load was higher and there were drug-seekers, people who needed 14 meds every 2-4 hours and one had to know all the drugs for cardiac, renal, respiratory, etc.  and the patients were heavy, stinky and rude because they are scared.

One thought on “First OB exam.”