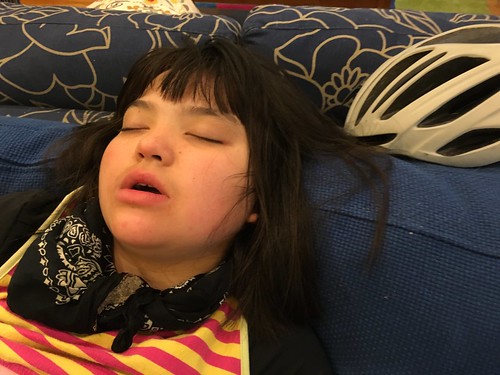 Edda is up all hours of the night and at 8 am, here she is passed out on the couch.  Jeremy’s headed out to California starting tomorrow for a week and I’m trying not to think too hard about the night time work that’s in store for me (and then prepping for the am bus pickup which Jeremy is 100% in charge of (unless he’s in California, then it gets delegated to me)).  It will be fine and it’s not that much night time work, it’s just mostly chopped up sleep with cartoon soundtracks in the background and then every once in a while, she sits on my head.  I’m ever hopeful that Edda’ll switch back soon to sleeping through the night.  Or at least until 5am.  At least she is generally delighted when she’s awake in the middle of the night.

Edda was sleeping on our couch at 8 am today, a Friday, because she had another orthotics appointment.  The foot braces look great in the very fashionable, geriatric, diabetic-type shoe.  Ankles look straight and she doesn’t get blisters from them.  The back brace seems a little off, I’ll have to search down the “in-brace” x-ray from the orthopedic surgeon.  And we were there for a new arm brace which is suppose to help Edda bend her arm a little without having her hand immediately go into her mouth.  But Edda defeated it in 30 seconds.  So no new arm brace.

At the beginning of the week, we assign each day to a person to cook dinner – well everyone except Edda.  But she gets a bye because she can’t use her hands.  I forgot to cook dinner on Tuesday, my night, and I’m terrible at last minute things, so Jeremy pinch cooked my night.  And tonight was Jeremy’s night, but Vince has a Chinese project due on Monday where he has to recount his experience ordering food at a Chinese restaurant.  We went to our favorite (A&Js) and told the waitress that he was practicing.  He asked for a table for 6 people, asked for ice water and Cokes, ordered all the food, asked for forks, and then finally asked for the bill.  His two pals (both taking Spanish, not Chinese, asked for all the same things in Spanish to each other).  He didn’t pay the bill though.  He let us do that.  Which is fine because we are always looking for an excuse to go out to A&Js. 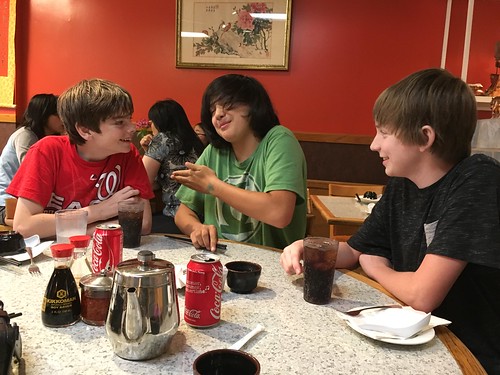