Some kids at RM (Vince’s high school) organized student walkout to protest the election.  It was to start today at 10 am. Vince mentioned it last night as we were eating dinner.  I asked him if he wanted to participate, he wasn’t sure he agreed with the theme of the protest which was “Trump is not my president” and also because he thought a lot of people were doing it just to get out of school.  A few of his friends did participate, I left it up to him to decide though Jeremy and I both thought it wasn’t an effective use of time and/or effort.  There have been a smattering of high school walkouts here in Montgomery County over the past week.  Honestly, I thought RM was a bit slow in their response – it’s already a week post-election, there are already new things to protest about. The kids did notify the principal – I believe the principal remained neutral on the whole thing, but did alert the police who ended up providing security for the whole march from the school through town center and up the county courthouse steps.  Unfortunately, an RM student sporting a “Make America Great Again” hat was punched and kicked during the walkout- which doesn’t really help promote the “Love trumps hate” theme that the walkout-ers were probably aiming for.  You can read about it and see video here. (Vince ended up deciding not to go on the walkout…)

This afternoon, I took Edda to see her orthotist.  She’s the person that measures Edda for her back brace and her feet braces.  I just wanted to make sure Edda’s brace still fit OK for the next 6 months until the surgery.  According to Leah, it still looks good so we left it be.  We talked a bit about how Edda’s back got worse over the past 6 months and she said that the upper part of the “S” curve is hardest to control because you really want to press against the shoulder and the brace can only go up to the armpit.  Really what Edda needs is that old fashioned back brace that goes all the way up to encircle the neck.  They don’t make them anymore because they found that no one was compliant with them. 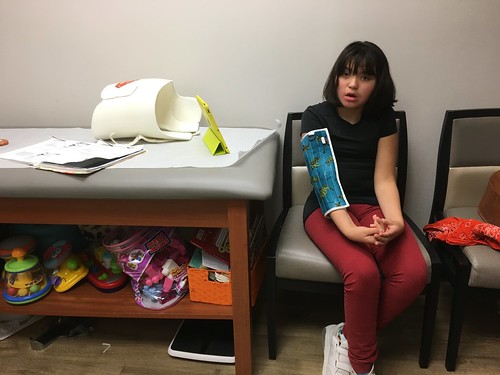 Edda is so happy these days.  Sometimes, as we are falling asleep, we can hear her giggling over the monitor for a few moments before she falls back asleep.  Even though Edda was laughing after the brace appointment, I had to sit down on the chairs in the lobby for a moment to regather myself.  Sometimes, 4 pm comes around and I think, I’m totally wiped out, but there is still a ton of the day left to deal with. 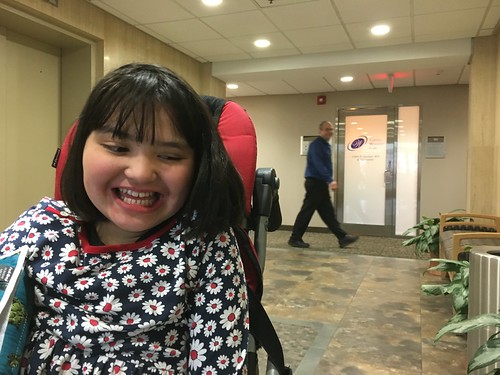