Tony texted me today and asked, “The Met charges admission now???!?!?!”  Well, OK, no it does not charge admission, it is still pay as you please.  But I paid the suggested donation, because it’s worth $25 to me to see a Picasso three inches from my face.  I could have brought the total expenditures down in the following way – I could have taken Lael up on her offer of her couch all three nights.  I could have booked only the two nights at the youth hostel because I ended up sleeping in Brooklyn, but I didn’t know at the time I made the reservation and paid that I would sleep on Lael’s couch on Sat night.  I could have paid for the subway for each trip I made, I think the unlimited pass pays for itself in 12 trips and I made 10 trips.  But I know myself and if I paid for each trip, I would walk many more blocks or try to do things all in a one mile radius to “save a trip” thereby wasting a lot of time walking or limiting myself to a particular area instead of just taking the damn subway.  I could have paid a dollar at the Met.  I could have not bought the needed umbrella (it rained all day Monday) at the NY public library for $25 dollars and paid $5 on the street, but, again, I like supporting the library.  And finally, I could have packed just a bit better if I had realized earlier I needed to be slightly dressed up for two fancier meals, but the Charlotte in Chelsea meal wasn’t arranged for until I was already in NYC. And I needed more underwear too.  So I think I could have done it for $100 cheaper, but I think it was worth $100 to me to do it the way I did.

Vince is getting ready for the county fair.  We have many pairs of walkie-talkies in the house.  Banks and banks of charging batteries.  He wants to wear the triangle rice patty hat to stand in the grassy field all day to park the cars.  I immediately looked at the hat and asked Adriana who was standing in the kitchen if the triangle hat was cultural appropriation and therefore, ahem, a little racist.  Vince defended himself against the cultural appropriation accusation with the following:  1) He bought it in China.  2) He saw people in China wearing it.  3) He is Chinese.  4) It’s damn good protection from the sun.  Adriana (who is blond and blue-eyed) said that she thought, as a non-person of color, that she was in no position to determine if it was cultural appropriation, but she knew it was not at all appropriate for her to wear the hat. 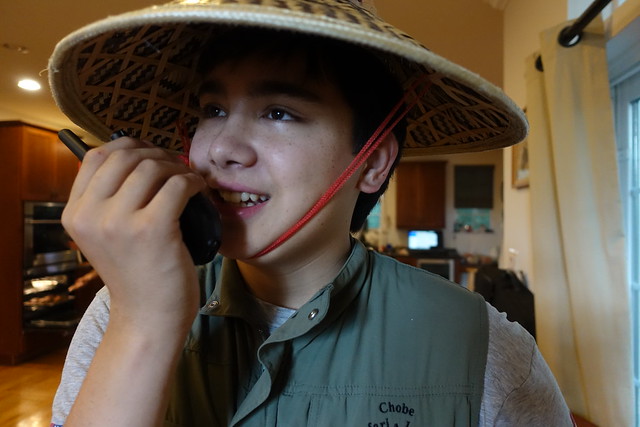 Sophie & Vince testing out the range of the walkie-talkies. 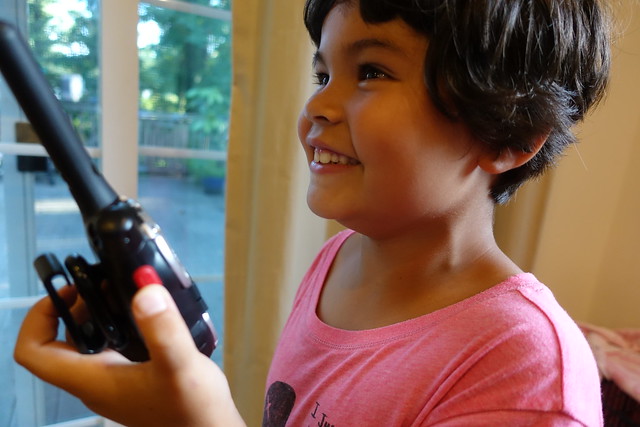 Edda’s time at Camp JCC is almost over (it ends on Friday and we STILL have three more weeks of summer) and it’s been a great summer because of Aurora’s companionship.  We invited Aurora’s family (Jeremy and Aurora’s dad, John, were coworkers at UCS, so we’ve known them for a while) over for dinner last night to celebrate a successful summer and to wish Aurora good luck as a freshman at Cornell!  We talked a lot about decathalons which is what John does in his spare time. 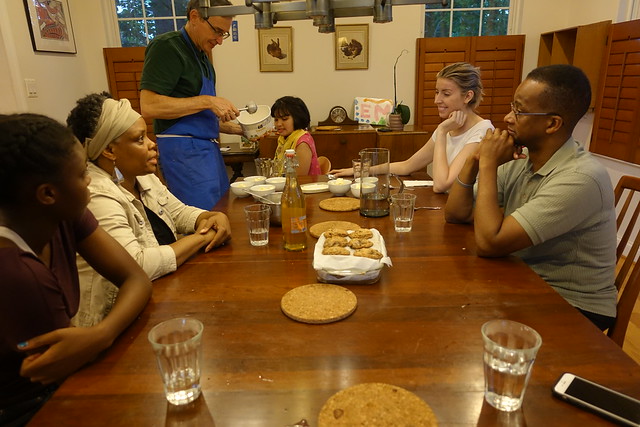