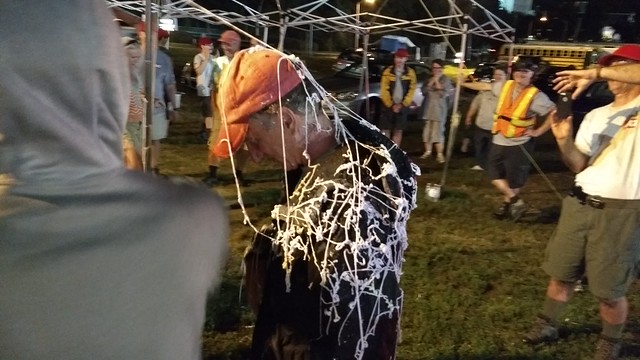 Saturday was the last day of the fair. They celebrated by silly-stringing Charlie (Mr. G). Vince got a chance to lead the parking operation by himself for about 5 or 6 hours that day, mostly in the afternoon.   It’s a big deal, he had probably 20 scouts and 20 adults reporting to him, all the shifts and positions to coordinate, including Jeremy (who he sent out repeatedly into “Death Valley” – the hardest job, hustling out in the hot parking lot waving each car into a spot with a team of 3? 4?  I dunno.  I never go to Death Valley.  I think there might be some gender discrimination there).  When he got home, we gathered in sleeping Edda’s room and did a post-mortem on his first management role.  Keep in mind, the boys had been together for over a week from 8:30 am – 10:30 pm and the night before, Vince had stayed at the fair until midnight riding the rides after their parking job was done.  And these are his closest friends.  Everyone was exhausted.  Vince acknowledged that there were some bruised egos – some of his friends were mad because they got passed over for leading the operation and thought they had more experience or higher elected position in the troop than Vince. Vince tried to un-bruise them. Other folks lost tempers and yelled at younger scouts and Vince had to make sure apologies were extended and accepted.  He also explained to us – and this is the craziest thing I can’t believe he knows how to do – his delegation strategy.  He told us he had four assistants and he said that he gave them each important chunks of the work so that they felt like they had enough responsibility to give a good contribution and not feel marginalized and in that way they could all feel like they were working towards the same goal. Is Vince a natural manager?  It might be true.  Though absolutely no one ever ever says in high school, I want to grow up and be a manager.

Sunday was clean up and a pool party.  We had a chance to talk to Kate. 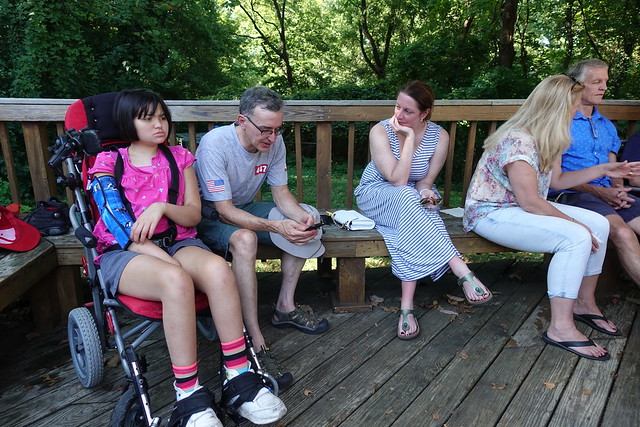 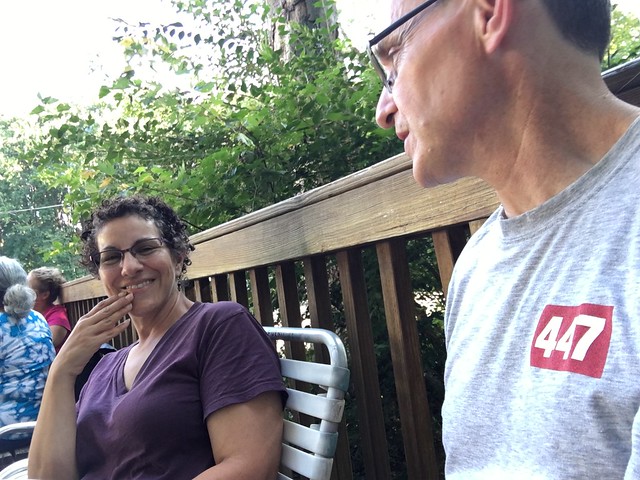 Jeremy is off to Monterey, CA for the week.  Lucky guy, I’d feel jealous except I know that he’s stressed about work that needs to get done this week while he’s at his conference.  And he has to network, which isn’t so easy for him. 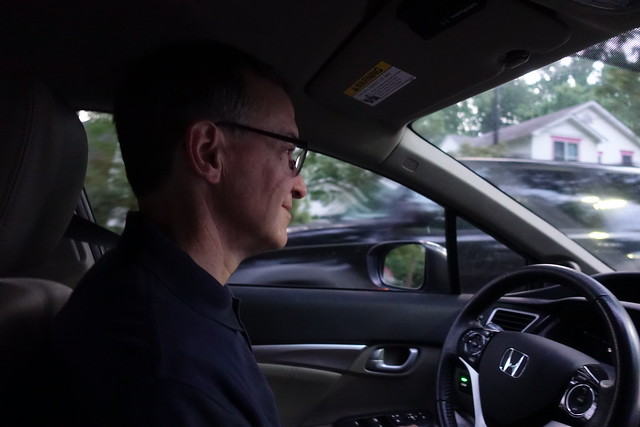 I worked most of the day today, but I did step outside to look at the eclipse.  I wore my solar energy shirt – “If only there was an infinite power source that was free to use all day every day…” 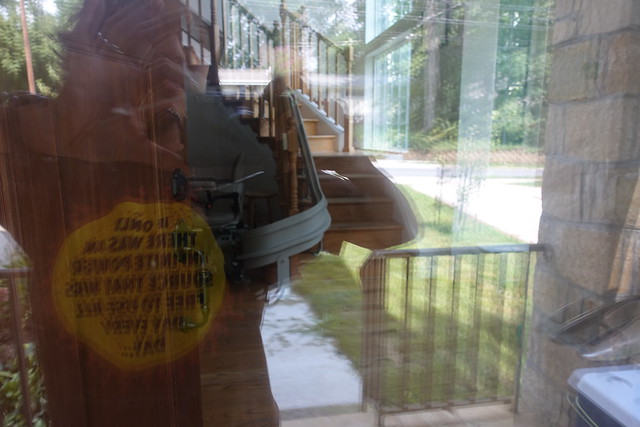 I didn’t have glasses, so I just looked at the shadows on the ground.  Actually the plan was to go outside my front door, see if anyone was outside with glasses or other solar viewing contraptions and ask to borrow/look through them for a moment.  However, this plan didn’t work as the only people I could see out peering at the sky were the ones I’m not entirely on good terms with.  Hmmm.  I did not ask, I let it be. 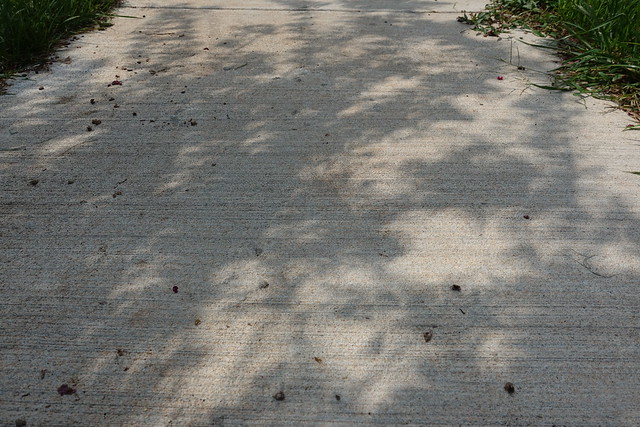 And I ate all the ripe tomatos off of my other neighbor’s vines (they told me I could, they are on vacation). 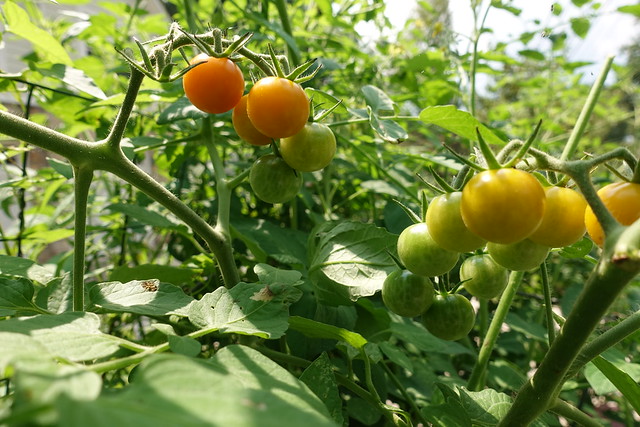 Vince is gone this week too, he’s in Chincoteague with friends and here is his viewing photo. 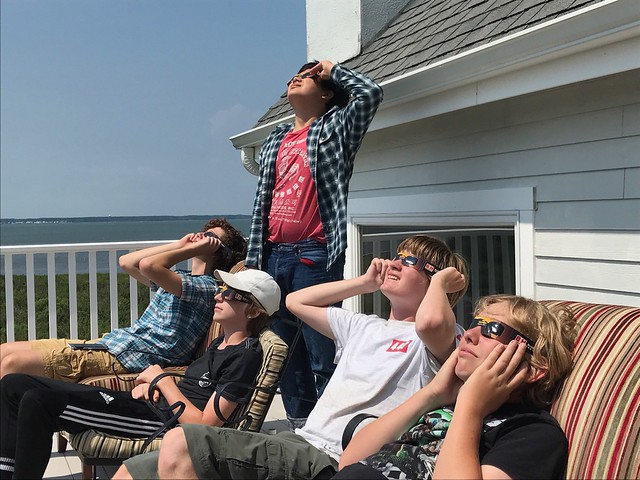 At the exact moment of the peak eclipse, my quilt I sent out to get quilted got delivered.  I like it!  Now I just have to think of a name and sew a gift label on the back.  This is Edda’s quilt. 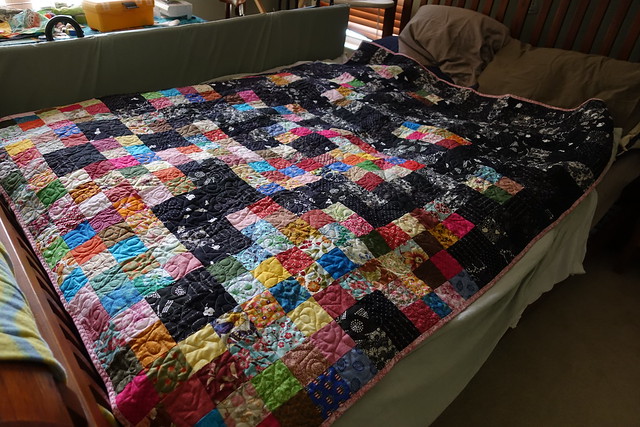 Just us girls this afternoon, we are spotty on Edda-care this week, so I picked her up from afternoon camp. 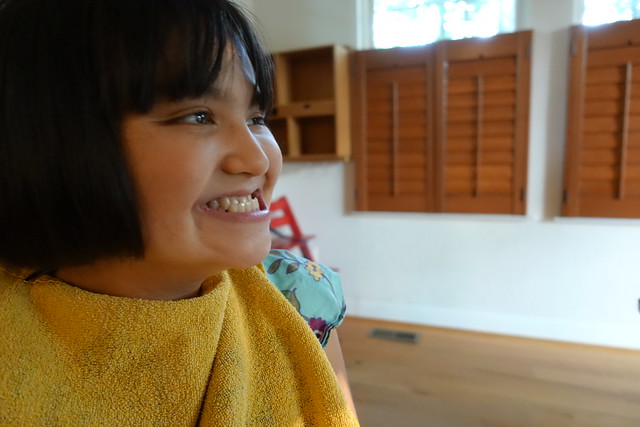 Jeremy made fun of my cooking this week even before I started.  He knows I won’t buy anything except fruit and bread this week and every night I’ll go fridge/freezer/pantry diving to whittle down our supplies.  Then when Jeremy comes home, he’ll sigh in exasperation and need to stock everything up again.  Jeremy likes to have things in reserve, I like just in time inventory.  If we ever ran a manufacturing company, we’d kill each other with supply chain management issues. 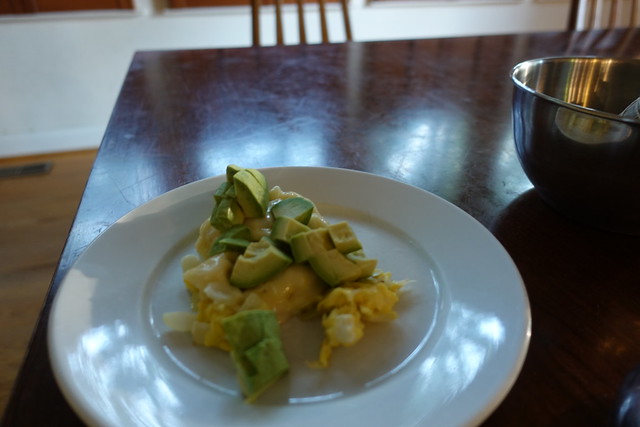