I guess i should recap on what i did in china. 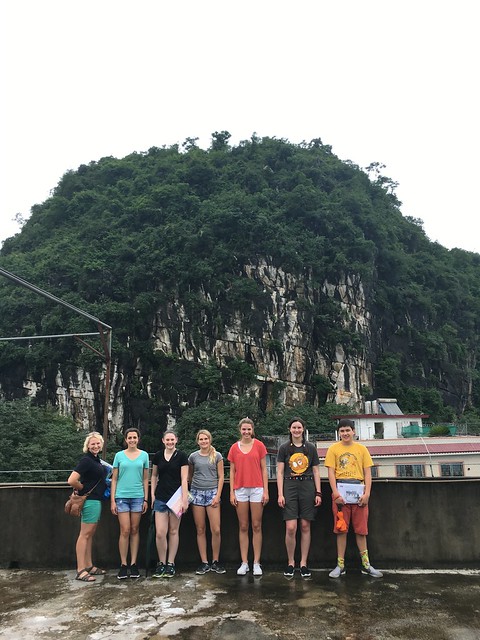 We were a group of six kids, all from different parts of the states. starting left to right we have Aubrey, she was the person who kept us all from becoming dead over the proses of the trip. Then we have Megan who was probably the most well rounded out of the whole group. She was willing to try new things, she was also very level headed and calm and collected (her Chinese was also the best). Next is Erin. She was deafeningly the one most out of her element. she was very picky and one of the few people I would even call a carnivore, she also knew very little Chinese dew part to having very crapy Chinese teachers, but she was by far the most improved by the end of the two week trip. Third in line is Merela (or something like that ;p) she was very into the historical and religious parts of the Chinese culture. Then there is Devon. she was the head honcho when we had free time she was the one mostly calling the shots. Next to me is Fallon, she was very interested in the Chinese culture as a whole she was also very weird and energetic. Don’t we all look like great friends in this photo!
(P.S. if you didn’t catch on I was the only Dude on the trip, I was also the Baby of the group. Fun!) 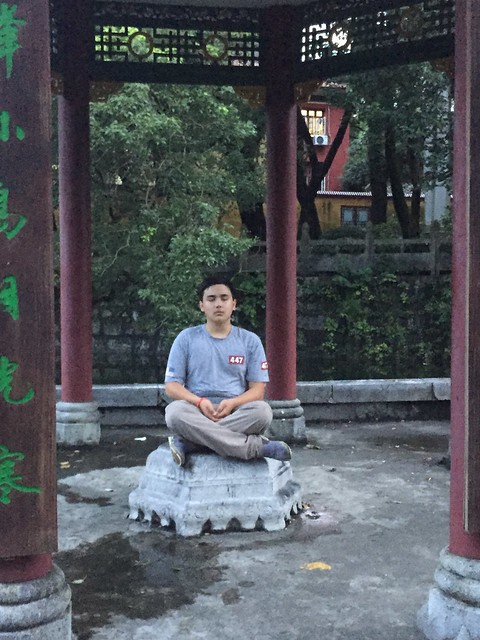 The first full day in Guilin we walked around town and did a scavenger hunt in downtown. 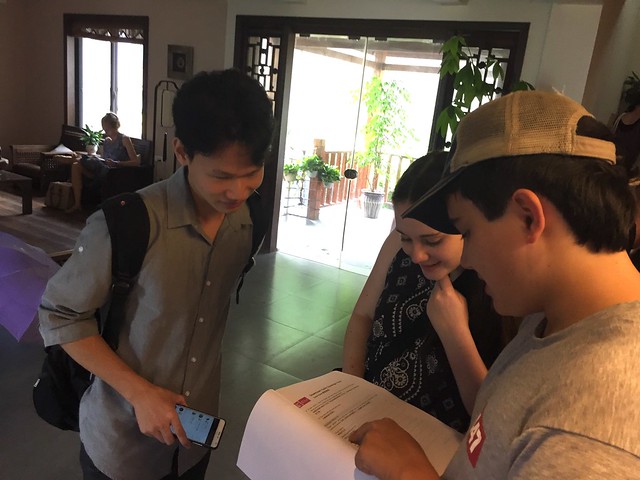 We got 2nd place. I also tried Durian, But I have no photo:( I didn’t like it. 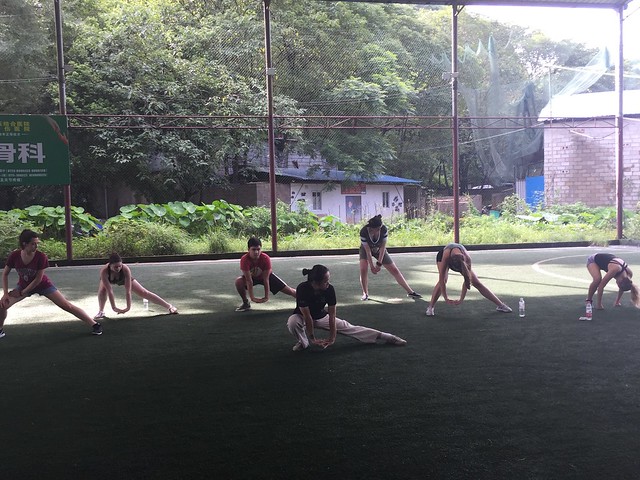 Day two we did tai chi. it was hard, but also fun. watch out Rina i might get better then you! 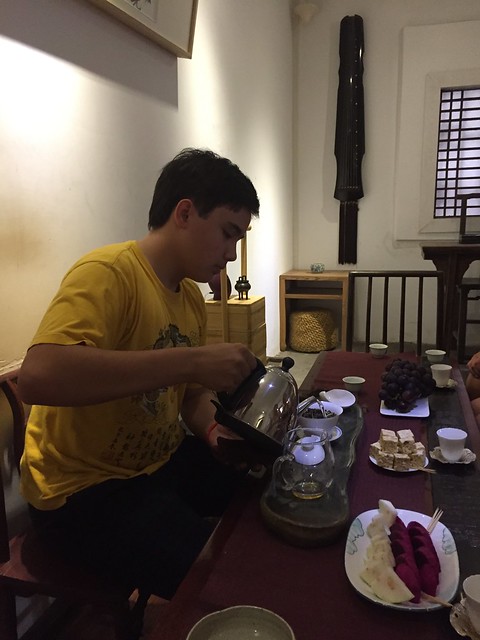 on the third day i learned how to pour tea. it was intense. 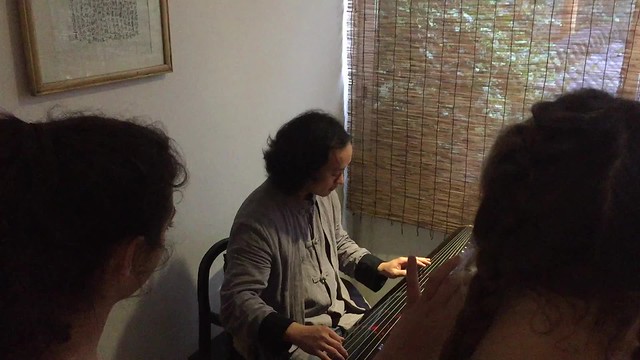 This guy was playing this traditional Chinese interment named a gu zheng. then when all the girls were dress shopping next door me and him had a jam session on the guitar. which i don’t know how to play. but i did keep a beat. 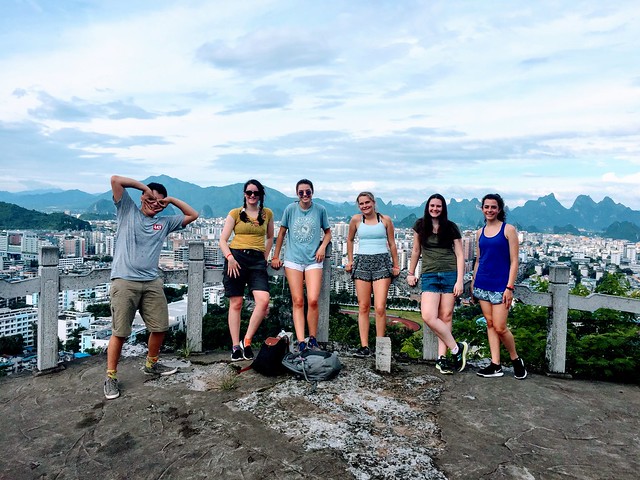 Guilin has some very steep mountains so we climbed one and i proceeded to make a very “Vincent” face. 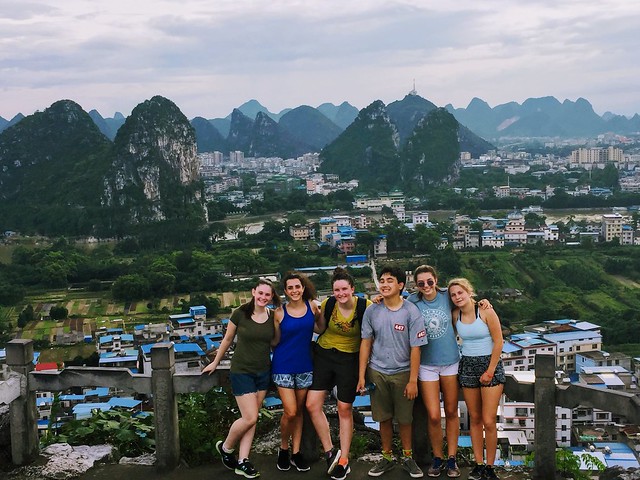 now we look like we don’t hate each other. 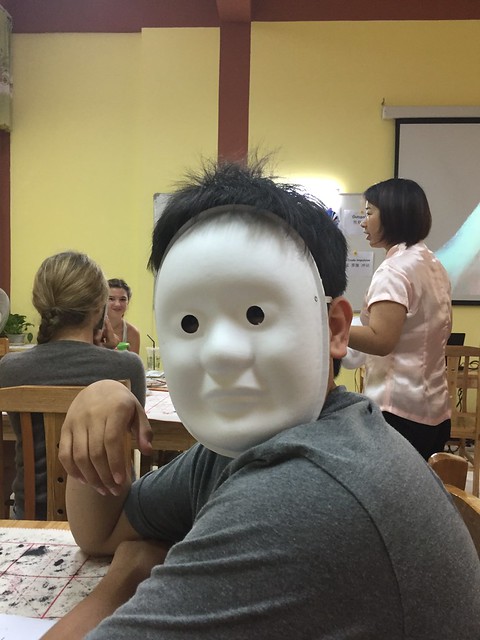 Then mask painting and karaoke and i’m so sad i don’t have any photos/videos of me singing to show any of you (sarcasm). 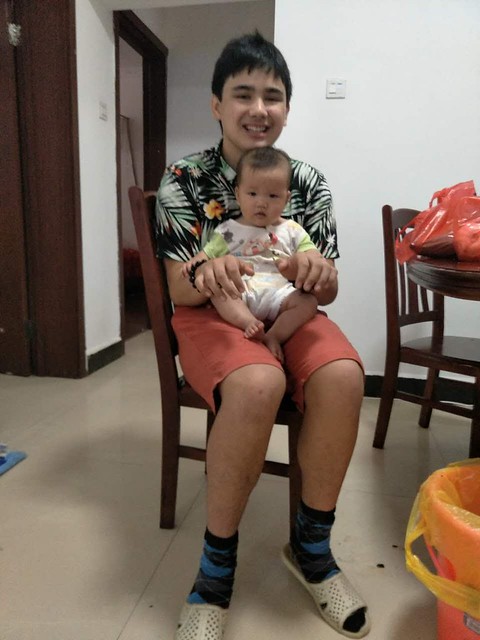 Over the weekend i stayed with a Chinese family. 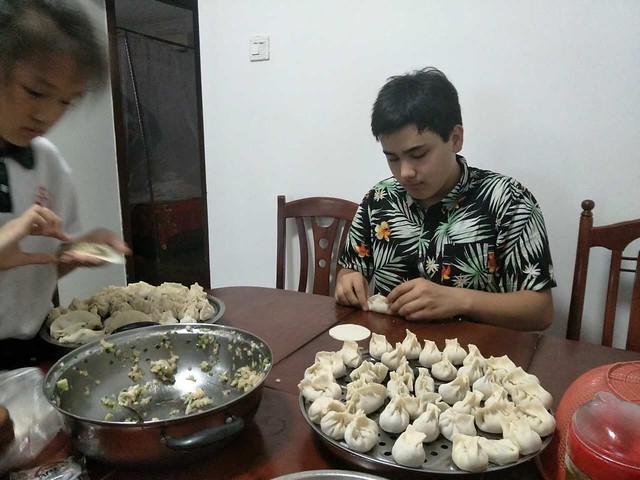 We made dumplings. All of the four kids helped! 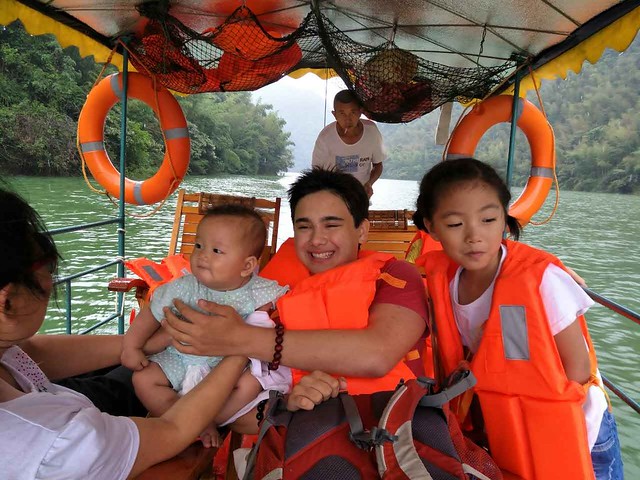 then we went on a boat which was fun and cold! In all my host family was very nice and they gave me a lot of great fruit!

On Monday we went to the more tourist aimed part of town. We bought a lot of dumb stuff, and we tried a fish pedicure. But we were all having so much fun we forgot to take photos 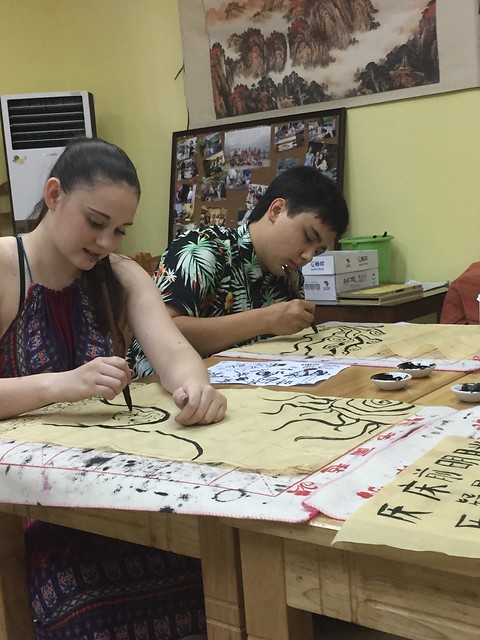 we got back from the weekend we learned how to draw calligraphy. because of my lack of delicacy, there were not many photos of my art. :p 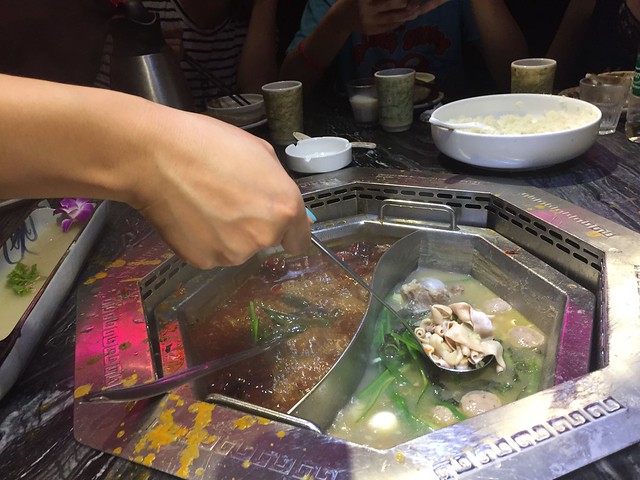 Later that day we went out to try si chuan hot pot :o. It was very hot/numbing, but nothing I couldn’t eat. 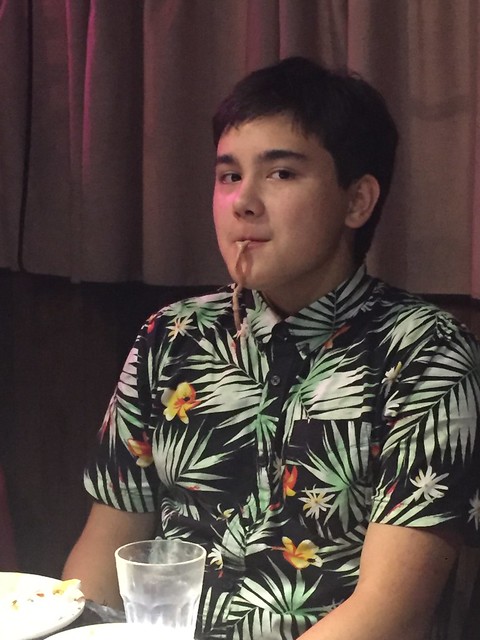 Me with duck intestine hanging out of my mouth! 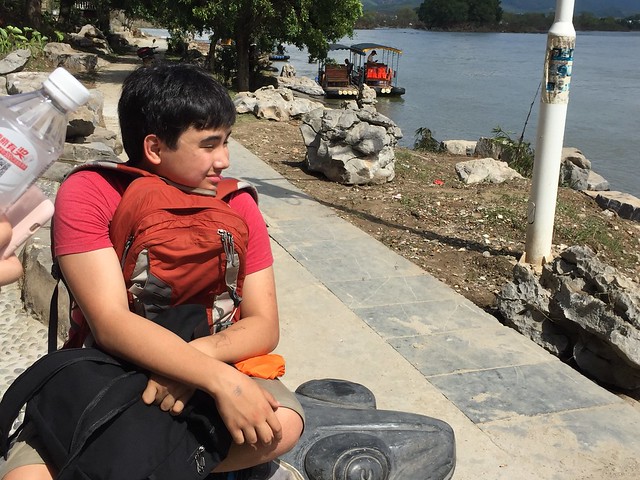 on the second to last day we went to a historical part of Guilin. It was cool and all, but we were all tired and getting over colds. 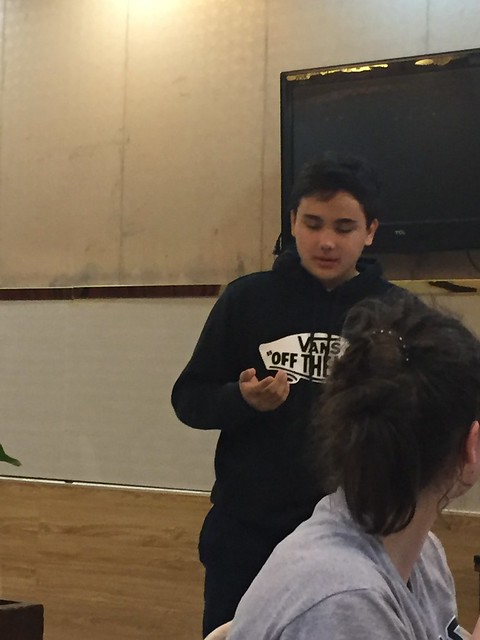 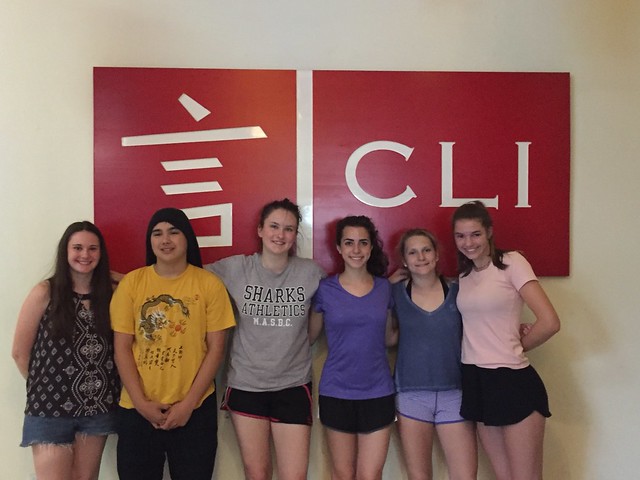 On the last day all together we said our goodbyes and went our separate ways. we look like we don’t hate each other by the end. which is good.

3 thoughts on “THE TRIP”