Our friend, Mary Ann, passed away Christmas morning.  Mary Ann was the wife of one of Jeremy’s best friends from high school, Ben.  Jeremy just saw them a few weeks ago during a business trip to the Bay Area and they were in great spirits.  Mary Ann had had an aggressive form of cancer with a genetic basis and she had gone through rounds of chemo/radiation about 4 or 5 years ago and she was very close to dying then, but she got admitted into a clinical trial at Stanford and was in the first cohort testing immunotherapy against colon cancer.  It was a miracle.  Really a miracle – the cancer went away, she saw her kids grow up and graduate from high school and settle into college and she felt good.  She was a pediatric oncology nurse so she was always a role model for me and my nursing adventures.  She had to give up bedside nursing when she got cancer, but after her recovery, she started teaching clinicals at her local nursing school.  Jeremy had business trips quarterly out to the Bay Area, he saw them each time and stayed at their house.  Jeremy & Ben talked a lot about work, they ended up working in the same field as grown ups, so lots to talk about.  Mary Ann caught a cold in the last few weeks and seemed to recover well from it, but a few days later, some symptoms return and then her heart faltered.  The immunotherapy may have weakened her heart during treatment.  Her passing was sudden and unexpected.  We are so sad, but we are also happy that she had an extra time that she and her family weren’t expecting – enough to see a few more birthdays, graduations and milestones.   <3

Christmas here was just the six of us, a much quieter affair than Thanksgiving. It’s also my dad’s birthday, so we try to amuse him (and sometimes we succeed!).

After many, many years where we get nice gifts for Dad that he doesn’t really want, he’s learned now to ask for what he really wants.  And then!  And then, he gets what he wants.  This year, he got a router.  (Not the internet kind, the woodworking kind.) 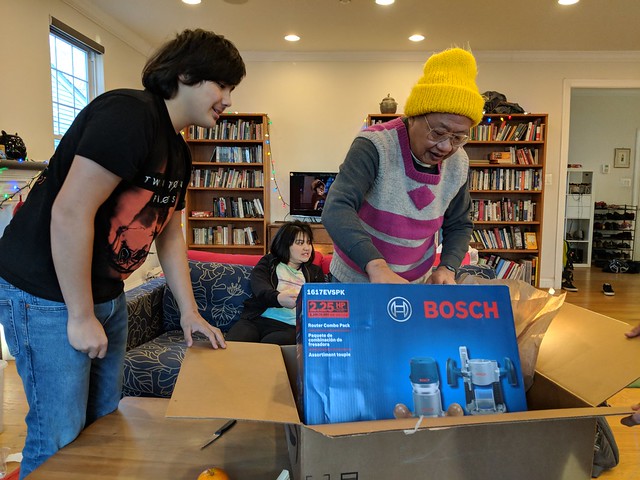 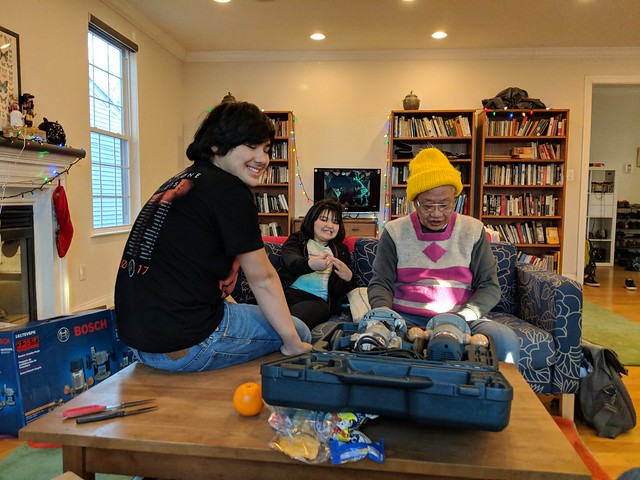 Vince’s big gift this year was a Korean-speaking rice cooker.  It makes white rice in a blazing 17 minutes.  We will try this new fangled rice called gaba rice soon. 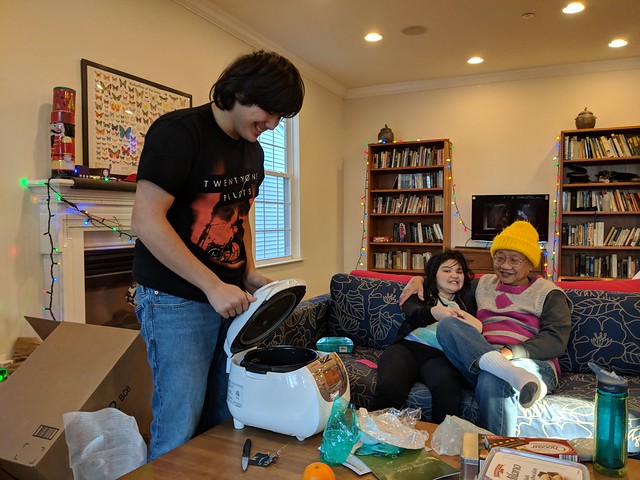 My mother got the only gift that anyone stood in line for – the instant pot. 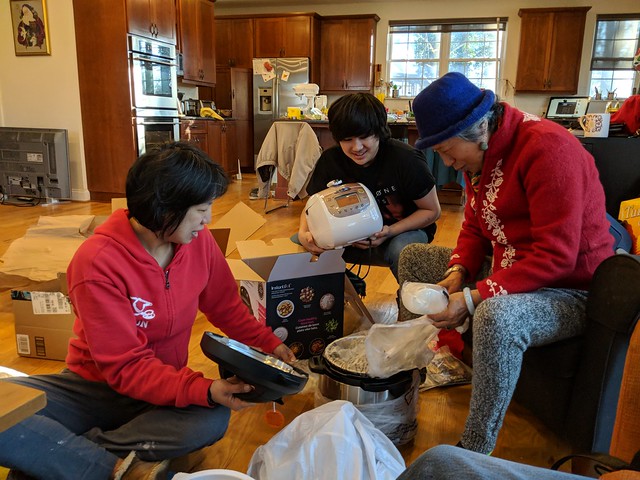 I got clever this year and mailed everything to the house under “Doris L*e c/o Christmas” so that I would know which packages were Christmas gifts and which packages were just house crap (shipped under just plain “Doris L*e”)  that we needed, but I did miss some – here we are getting cooking seasonings for Christmas.  I did the same thing this year and left all the shipped packages unwrapped in their cardboard boxes.  I’m glad I don’t spend hours wrapping.  It’s kind of fun having Vince open them all and then we see what it is and who it belongs to. 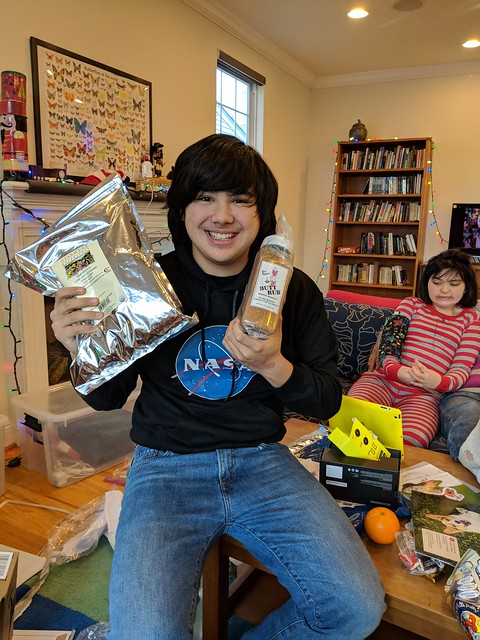 Edda had a great morning, I will post a video of her and my dad just laughing and laughing together.  She got a great winter jacket. 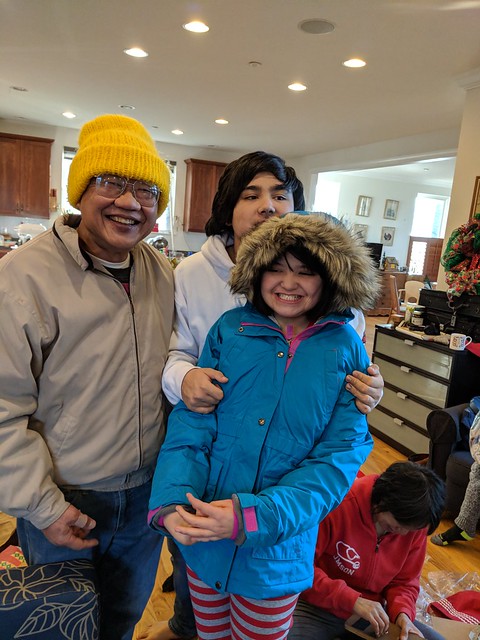 Nat and Dara came over mid-morning. 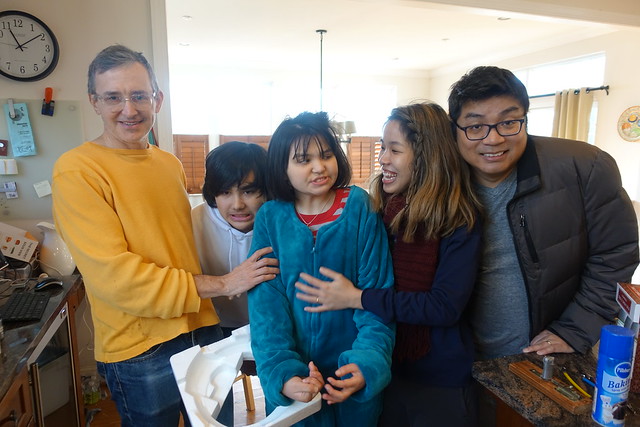 Then we spent the afternoon making Christmas dinner.  Vince wanted to make beef Wellington – he’s been binge watching cooking youtube videos and this particular dish inspired him.  It was a crazy extravaganza.  We first bought a beautiful filet roast and sous-vide-ed it the day before and put it in the fridge.  Then Vince set about making the wrap which involved layering prosciutto. 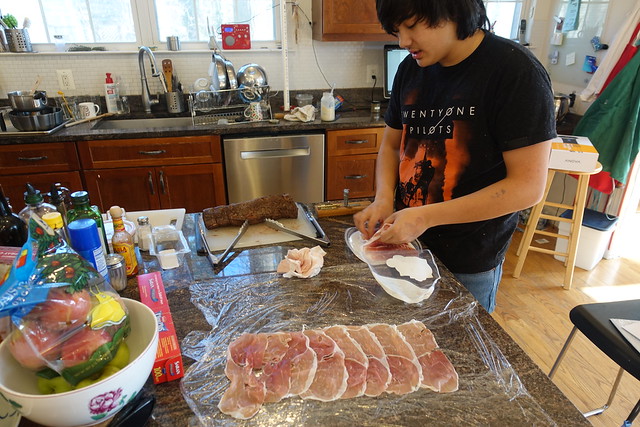 A mushroom paste was slathered on and a layer of duck liver. 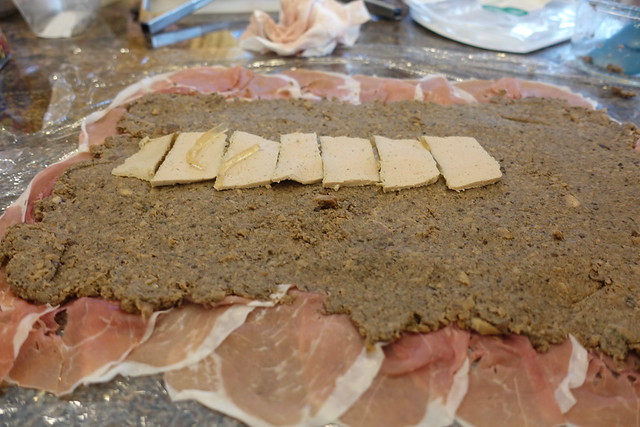 Then the roast gets seared and covered in mustard and placed in the middle of the layering: 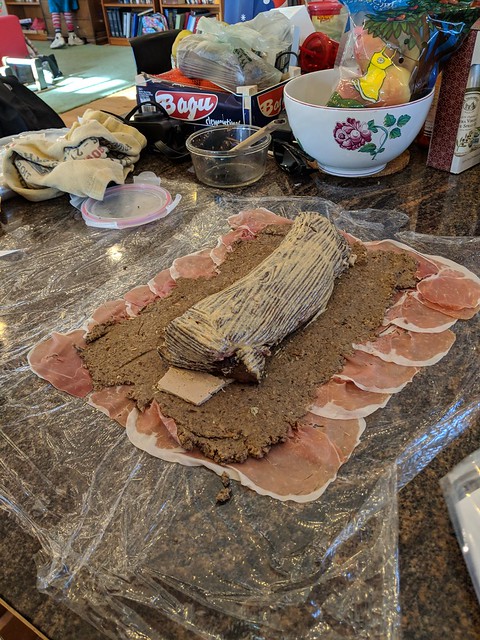 And then the whole thing is wrapped in puff pastry. 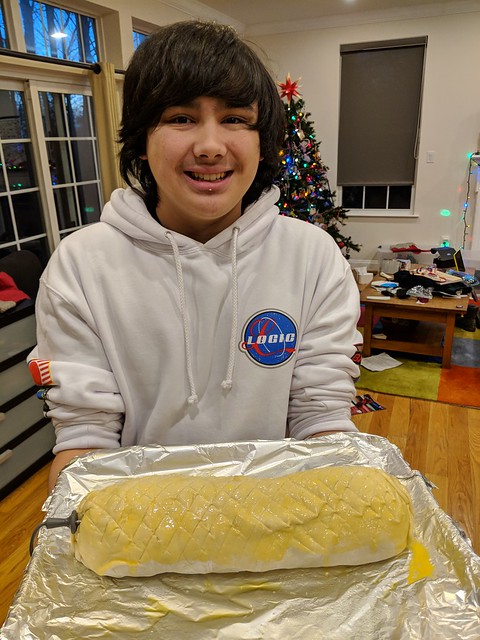 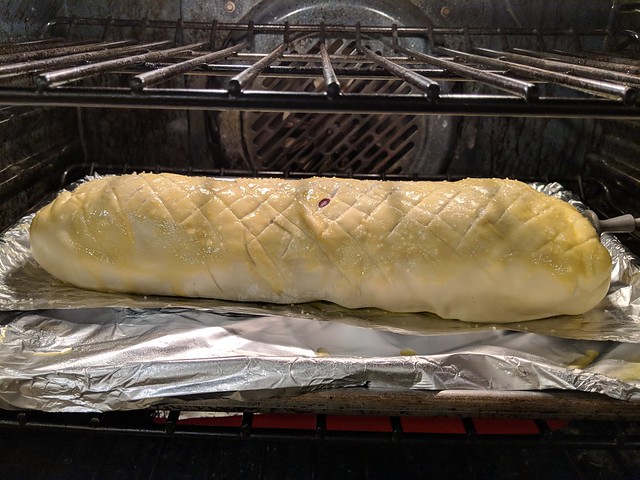 Cooked until the pastry is golden and the inside temperature is up to 125F (?) 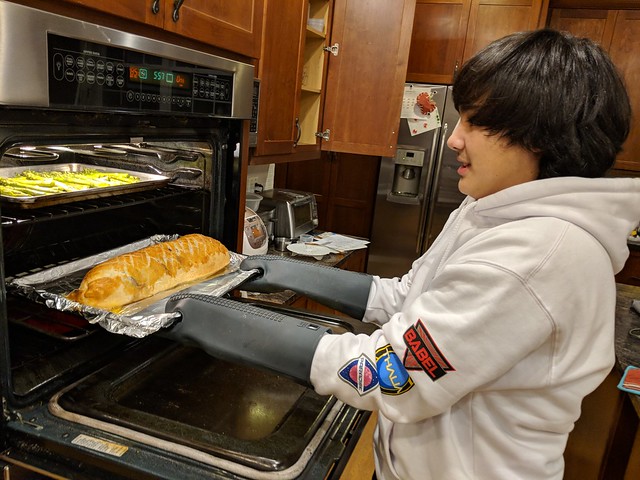 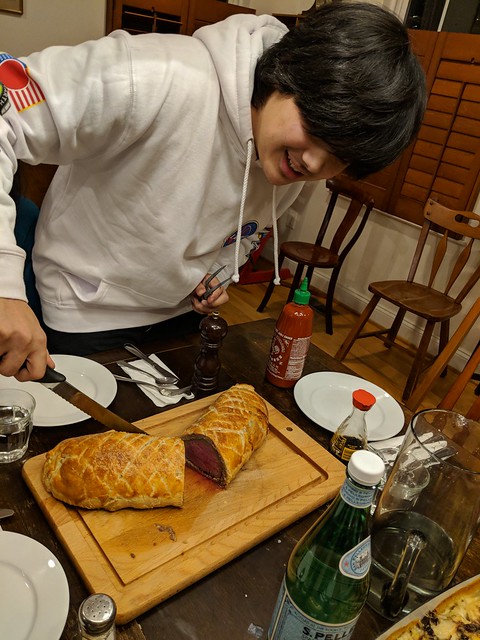 And here it is plated.  It was perfect.  Delicious!  The boys did a good job. 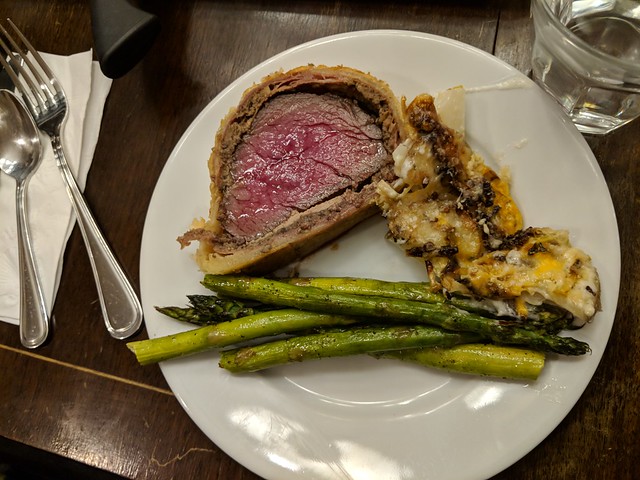 I (inspired by my binge watching the British Baking Show) made a raspberry creme pie with my own press-in shortbread crust, creme patisserie and raspberry jam/sauce. 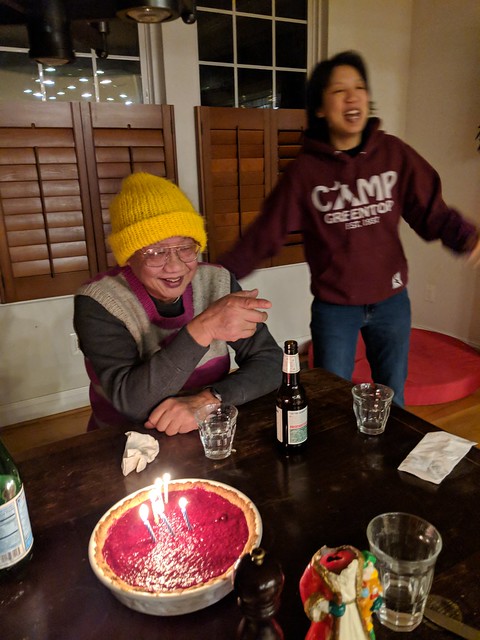 And we sang happy birthday to my dad who turned 76! 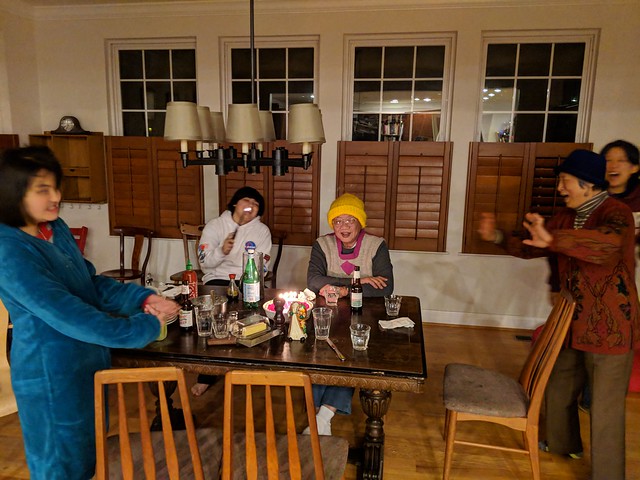 I’ve been working on and off the rest of the week.  Jeremy and Vince have been off.  Edda’s had camp in the afternoons.  We took Wed off to all drive to see Vidya in Philly on Wed.  Vince did not want to go because we were “wasting his vacation time”.  We tried to indulge his requests which were 1) philly cheesesteak 2) ability to explore philly on his own for a few hours and 3) he got to pick dinner plans.  It mostly worked out, though it was bitterly cold and Vince explored for only 45 minutes.   It was, again, nice to see Vidya.  Hopeful he can be home soon, but there are many challenges.