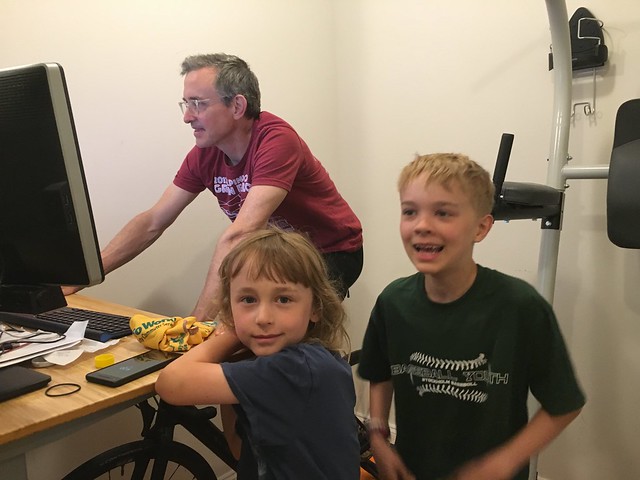 On Tuesday, Jeremy showed the boys his biking closet and his virtual biking world.  After breakfast, I took the boys to the Clarksburg Outlets a little north of us to shop for running shoes and flip flops. 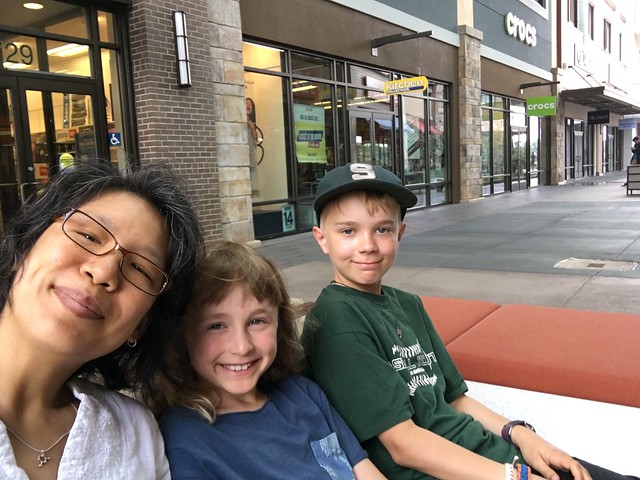 I hung out a bit at the Disney store where I seriously thought about buying these pants. 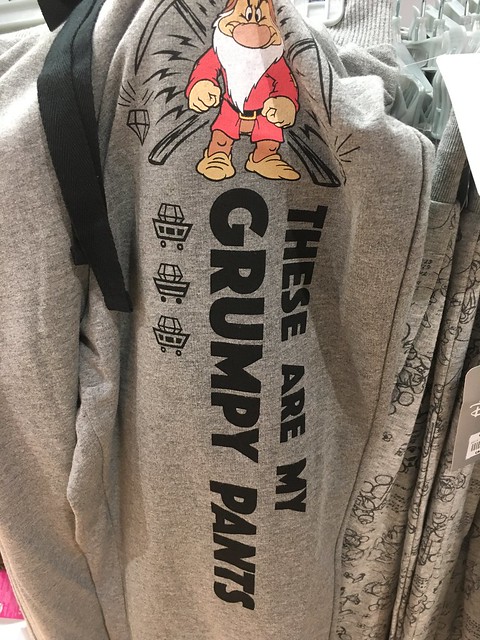 After the outlet stores, we sent Ben downtown on his own to have some solitary museum time.  We took the kids to Dave & Buster’s for an afternoon of arcading.  This was the only game that I played – a skiiing one. 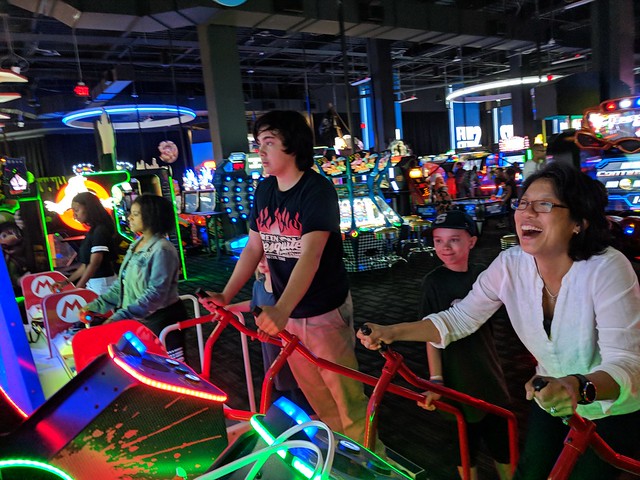 We all reconvened at Nationals Park to see part of the Beltway series (Nationals vs Orioles).  It’s a little confusing to me, I guess I’m a Nationals fan now.  When I was growing up, there was no DC team so we rooted for the Orioles.  It was an exciting game – Nationals won 9-7.  The weather was perfect.  It just felt like summer.  Cousins came also! 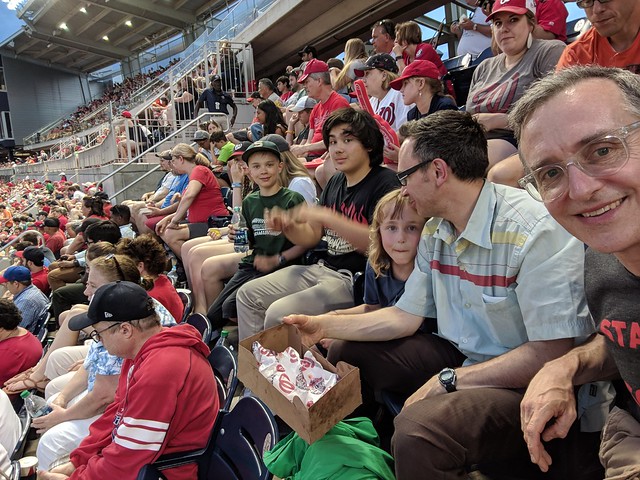 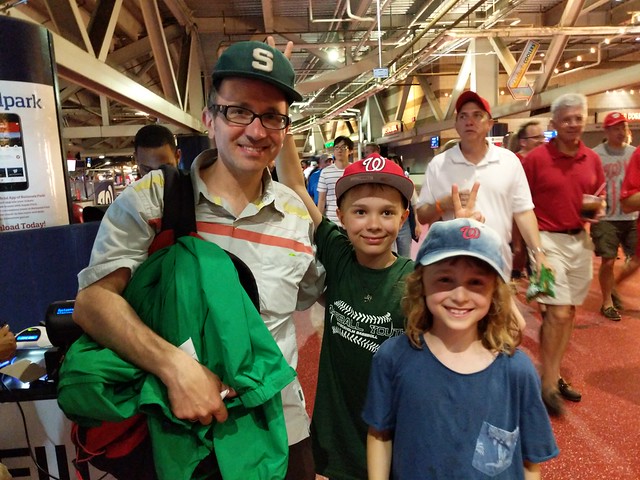 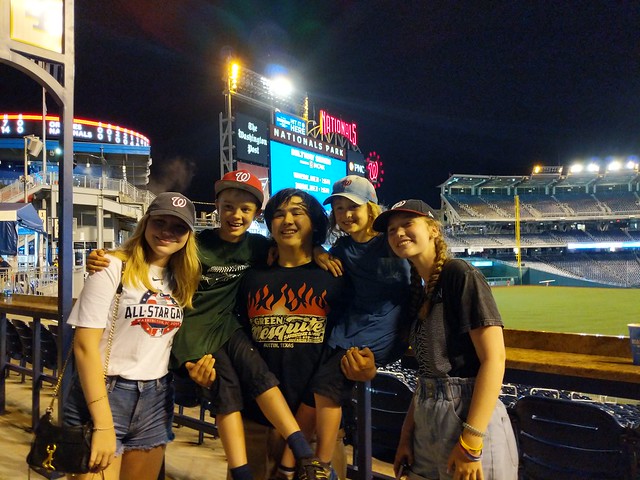 On Wed, I spent the whole day (!) driving Vince to his summertime gig.  He’s a counselor at Lenhoksin, a camp at Goshen Boy Scout Camp.  He has his very own tent with a cot and mattress.  It took me all day even though the campsite is only 3.25 hours away because 1. we needed to stop at Dick’s to buy fishing line and a fishing license 2. we needed to stop at Target to buy gum and bic lighters (I told him I did not want any late night calls about non-good-judgement use of said lighters) and 3. I got very few instructions on how to find people at camp and our cell service doesn’t work at the campsite so it took some time finding and asking people to make calls, to figure out the phone numbers, etc. and 4. there was an hour’s worth of delay on the way home because of accidents and it was raining heavily and I’m a nervous driver.   Vince was a little nervous, I could see it ramp up as we got closer to the campsite.  I was nervous because they seem very disorganized, but I was less nervous as I left because the two other counselors I met had been there 8 summers and 5 summers respectively.  I feel like anyplace that has people coming back summer after summer is fine.  Regarding cell service, we have T-mobile because we are cheap.  It works well in urban areas, but does drop out in the forests.  I think Vince is a little disappointed to be out of cell range.  It’s especially hard because the Verizon people all have service.  Hmmm, I think we might try to get him a new sim card for the summer.  He’ll be gone until the end of July.  5.5 weeks.  I’m practicing letting him go.  He practicing being on his own. 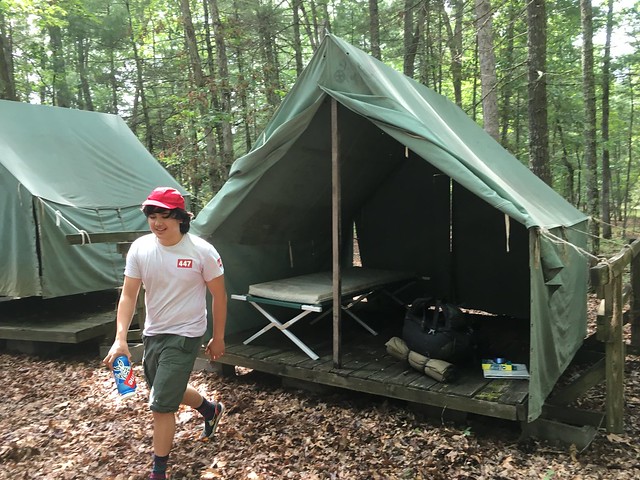