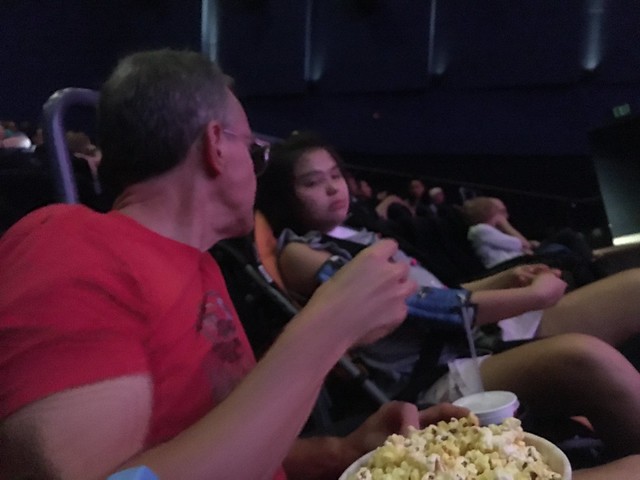 Jeremy, me and Edda went to see Crazy Rich Asians to end the summer.  I wanted Vince to go, but he wanted to stay home and enjoy the empty house to himself.  I cried again!  Even the 2nd time.  Jeremy liked the movie too.  Edda was a little bit noisy, but Jeremy managed her and fed her popcorn the whole time, hopefully we didn’t bother too many people.

Tomorrow school starts.  Jeremy went last Thursday to see Edda’s teachers at Wootton.  I had gotten an email saying that there would be a freshman half day orientation that day, including the whole bus schedule and I emailed the special ed teachers and asked if that general freshman announcement included Edda – if her bus would run and if teachers would be expecting her.  They didn’t quite know if the bus would run for Edda, but they extended a personal invitation to visit the classroom.  I was at the hospital, so Jeremy and Kitachi went on their own.  A bunch of her friends are there – from elementary school and middle school, it’ll be nice to see them again.  We have a full roster of childcare providers – Ning in the mornings, Kitachi in the afternoons/evenings and Eliana on the weekends.  We have Vince for backup and even better backup when he is able to drive in the late fall so he’ll be able to pick up or drop off Edda as needed.  It’s going to be challenging as the summer lull comes to an end and Jeremy starts travelling again for work.  It remains unclear how the scheduling will work for me at the hospital over the next few months. Theoretically, we should be able to swing any weekday travel and I think our caregivers + Vince would be able to throw together something for weekend work travel, but it’s not a relaxing thing to think about. This nursing gig is pretty crappy for anyone who is trying to arrange childcare.   A lot of my coworkers have their mothers taking care of their babies.

Vince is going to be a junior, a big year for him.  After a particularly angst ridden spring sophomore year (for me, not for Vince) where I fretted constantly about where Vince was going to get into college, how he was going to get into college, what we could possibly do to improve his chances to go to particular colleges, I decided that instead of fretting, I would let it go.  I’m forcing myself to pay less attention to Vince’s college application process by paying attention to other things.  He’ll be fine, he’s making good choices, learning what I think he needs to learn to grow up and be on his own.  It’s easy for me to be caught up in all the hubbub, I’ve had people tell me I need (right now! right now!) to hire not only SAT prep tutors, but also Vince’s own personal college application coach.  I’ve had people tell me that even with a heavy load of AP classes, a 4.0 average and 1550 on the SATs, their kid got rejected from every “desirable” school.  The absolute worst case in our situation would be if I pushed and pushed Vince to attain whatever level of performance I thought was necessary to get into a name-brand school and he got rejected from all of them and then I would have ruined the very fond and happy relationship that I have with him (which I’m super grateful for, I love my teenagers, they are both a joy to hang out with.  Right now they are both sleeping right next to me in Edda’s twin-sized crib squished together like two peas in a pod while sponge bob square pants plays on TV.  They might both be snoring a little).  So I’m doing my favorite parenting thing which is nothing.  No SAT prep, no college coaches, no crafting experiences and/or extracurricular activities.  There is only living a full and interesting life – which I believe Vince is doing fine on his own.  We’ll see how long that philosophy lasts, I’m sure I’ll eat my words and hire someone to write his college essays.  I guess why hire anyone?  I’ll just write them myself.  In the female middle-age voice?  That would be weird.   Who am I kidding, I just want to go to college myself again.

And finally it means that I will have a few hours tomorrow during the day when no one is home at the house and I can finally do all the things that I want to do when no one is home like listen to how quiet the house is and also to put something down on the counter and find it in the same place three hours later.  I’m very excited!

One thought on “School starts!”