I’m trying to understand how to use the insta-pot.  I made a perfectly edible dinner, but it wasn’t what I imagined it would be. 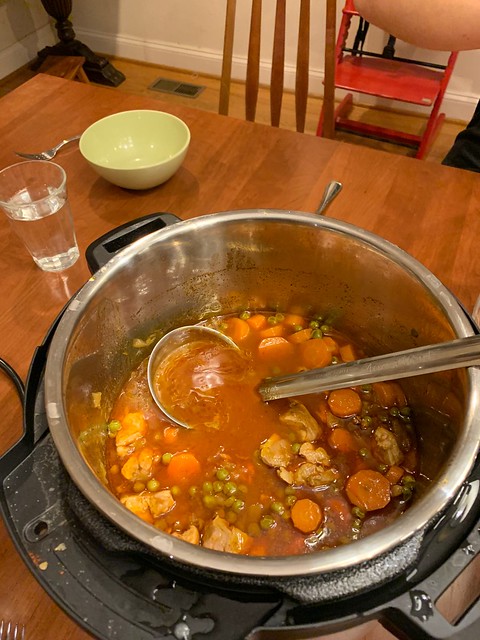 Working my nursing gig – there are so many Sunday nights and also so many Friday nights.  I always hate that Sunday night before work feeling and always love Friday afternoon feelings, but it feels like now I have those feelings two or three times a week and it’s a roller coaster of emotions.

I seriously thought about quitting my nursing gig at the 6 month mark over the holidays which would have meant at the end of January.  Actually I was dreaming and feeling happy that I would have my old life back.  Jeremy and I had long discussions late in the year about what the nursing meant for the family, how much time I was spending with him (less), how much time I was spending with Vince (less), how our social calendar has evaporated and how I’m only cursorily paying attention to bills (see above),  the house (clutter is a-cluttering), the dog (whimpering and peeing in carpeted rooms).  I also had some discussions with Vince about how much time I was spending with him – whether he wanted/needed me around more.  Thoughts about how logistically it has been hard with Edda’s care since Ning is on maternity leave and our three caregivers’ schedules.  And I’m tired.  I miss talking with my husband. I miss talking with Vickey, I miss our book club, I miss working out every day, I miss feeling relaxed, I miss orienteering weekly, I miss scheduling leisurely weekday lunches with friends.  I think I’m screwing up a bit parentally – I think I’m not doing Vince justice his junior year.  I want to say, that even with these long discussions, both Vince and Jeremy are supportive of this year’s experiment (though neither of them wants to hear my hospital stories and Vince is like – I’m never, ever growing up to do anything where I have to spend any time in any hospital).  My parents are also, surprisingly and strangely, supportive.  My dad especially is like – you need at least a year to see enough patients to know what to do. I didn’t quite expect that from him.

Jeremy is like – you sure you want to quit the nursing gig?  The govt could be shut down for a long time and then that’d be our only source of income from you.  (We have a few weeks funding because we are self-funded, so we are still chugging along like normal, but not for very much longer.)

I don’t hate the nursing gig.  I actually kind of like it.  Actually, if you catch me in the right mood, you might just get me to tell you that I love it.  I like it in the same way I like a hard track workout.  You kind of really don’t want to go when you are warm under the covers and during it, you are like, argh this is totally killing me – I cannot possibly do this for one moment longer and then you keep doing it, and then when you are done for the day, you feel fantastic.  So if I think about it that way, it’s OK.

I spoke with my boss (a kind man who people do follow around to work for) to try to work two days a week instead of three and he said that he had no part time positions open.  I told him I was constantly overwhelmed and he said that he thought that I set my standards “too high”.  He said that I was doing fine – no complaints from the other nurses who hand off to me in the morning or that I give report to in the afternoon, and no complaints from the patients.  He said he would have heard about it by now.  So just keep going, it’ll be fine.  I didn’t know that those were my metrics.  (I thought my metrics were more closely tied to documentation or any of the 10,000 sheets of paper which need to be printed/filled out for each little thing, which I fail at constantly.)

I liked this article from the NYTimes about the woman who got the gig to travel around the world to 52 places in a year.  I am comparing it to my year of bedside nursing.  Ever since we figured out Edda’s limitations, we have traveled a bunch – I don’t want to say we never travel, but sometimes I look at other families who are able to travel with ease to National Parks or places with stairs or whatever and sigh a little bit.  I’ve always said that since we don’t travel as easily, I’ll bring the world to me and certainly we’ve done that with all the hosting of our au pairs and I do think of working in the hospital as bringing the world to me.  My coworkers are diverse, my patients are diverse – I get to see a slice of the world I would normally not see.  The first lesson from the NYTime’s traveler that a year is short.  And it’s true, a year is short, and I’m almost halfway done with my year.  After a year, I can stop.  Or maybe I’ll keep going.  We’ll see how I feel.  I guess I’m going to keep going for now.

One thought on “Insta-pot, updates.”