Skip to content
When the developmental pediatrician, neurologist and the geneticist all agreed that Edda was significantly delayed in all areas, physically and mentally, I figured, OK, well she’ll probably never learn graduate level fluid dynamics (I never did learn it either – but at least there was a cute guy drinking coffee who always sat in the row behind me), but we’ll start today and slowly teach her how to do everything, first how to walk, next how to walk on grass, next how to climb stairs, next how to run and then, finally, how to dance like Michael Flatley. It was going to be forward – going ahead – making inroads – being the last person in the race (you know, the incredibly stubborn who person spends 24 hours running a marathon because she has no legs, but is dragging herself on a skateboard with her hands…) but at least going forward one step
at a time.

When the geneticist told us which genetic abnormalities they were going to test for, I sat in the doctor’s office and I promised myself that I wouldn’t look up any of the diseases on the internet until the test came back positive for a particular syndrome. Because what’s the use of suffering in advance? But I’m very good at suffering in advance. I love to think about what might happen and then get all stressed about it – on a small scale, it might be worrying about hosting a dinner party for friends and on a large scale, well, it could be the various hideous ways we could all suffer and die, one of which might be in a graduate level fluid dynamics class (low Reynold’s number! scaling arguments, people! Argh, falling over!) Well, I think that promise to myself might have lasted a week? Maybe a week and a half? So now I’ve spent some time looking at some of the various syndromes and basically freaking myself out about what the future might hold for Edda. It turns out that some of these syndromes are degenerative, which means as she gets older, it could get worse. Which, of course, is a bummer for everyone involved.

I don’t want to imply that I’m sad or stressed these days, I’m actually pretty happy. Edda’s walking and becoming steadier on her feet, we are trying to keep her hand out of her mouth because we’ve been noticing that she’s been using it less and less to pick things up and we want to keep the functionality in the hand and I think she’s learning (not to speak, but to understand) a couple words (although I’m always the skeptic). She’s not suffering in any way and so I’m also trying hard not to suffer too much as well.

Mom received yarn and needles. Doris, thanks. She will knit a short sleeve sweater for me 🙂 We rented a car today and drove to the West Coast Park near Edda’s school. It has an awsome dog run which Ruby will like and also a great playground for Vince and Edda. Whenever things get rough, my favorite thing to do is to find a walk-in closet and camp out there with my down comforter for a few hours. In high school when I was stressed out about a boy or about a test or getting into college, I use to do this late at night with a book while the rest of the house was asleep. When I lived in Austin, there was a wonderful walk-in closet that was exactly the length of my body and I could hang out there and ignore the rest of the world. In Singapore, there are no walk-in closets in my house which I think is a good thing because it makes me resist my depressive tendencies. These days, I’m trying very hard not to spiral out of control emotionally (I don’t want to end up on medication and I don’t think I’ll need to, at least not today) and I’m pretty proud of myself, I’ve been in a good mood all weekend and we’ve been having a lot of fun. I don’t like going to sleep very much at night because I know as soon as I’m asleep, tomorrow will be here and I’m not really sure if I can deal with whatever tomorrow might bring. And when I wake up every morning, I have to give myself a pretty firm pep talk (Doris, it’s going to be a great day, try not to ruin it for everybody else – I usually have to say this to myself a few times – I’m never fully conviced, but I usually try to trick myself into believing it) and usually, it’s a pretty good day. Hooray for Doris!

Poker night was tonight. We all started out with 3k of chips. I lost a a pretty large hand on a pair of Jacks to someone with a pair of Kings and was feeling pretty nervous. My preformance recently hasn’t been exactly stellar. I won a small pot and had around 1800. I get an A-10 and the flop comes down A-x-x. Great! I bet about half my stack at the moment which is around 700 and a nothing card comes down on the river. I’m up only against Ky, so I decide to go all-in on my pair of A’s. Ky calls me and turns over A-7. Now I’m feeling pretty good at this point with 1 card to come. He needs a 7 to win the pot and a 3:44 odds of it happening. Of course, he lands the 7 and busts me from the table. I’m the first one out.

After we’re done with the first round. Everyone stuck around and decided to play another round. just a little faster and for 5 bucks this time. I got burned early again with an AK suited vs a pair of Kings. I’m down to about 1k in chips. The blinds whittle me away and I’ve got about 600 left, and the blinds are marching up fast to 50-100. So basically I’ve got to pick my cards and move all-in at some point. I get a K-J and figure it’s my time, so I go all-in. Everyone folds, except Ky, who’s got a huge stack, and calls me on a pair of sevens. Great. I make a comment about how they’ve been bad luck for me tonight. I get my King on the turn, which puts me at 44:2 odds to win the pot, and I’m feeling pretty good at the moment. Of course, the river deals me a 7 and I get busted once again, by Ky, all-in, leading by a good amount, and actually busted by the exact same card – the Seven of Diamonds – twice in one night.
Wow.

a 1:322 percent chance of happening. I was leading in both hands. omg. I feel so robbed. Vince’s school is so funny, so Singapore-ian. I’m not really allowed inside so I’ve never seen Vince in class. This picture is from outside in the hallway where all the parents wait for their kids to put on their shoes and come outside. Vince likes his school now, although every morning, he still says he doesn’t like the Chinese class, he goes to school cheerfully and happily, which is a relief for me.

Sometimes I just have to laugh. Stanford is obviously not an organization that has a lot of highly paid worker bees like most engineering firms.

My motherboard on my Dell desktop has bulging capacitors. Basically my computer will randomly shutdown every 2-3 hours. Apparently this is a known issue with the GX270’s that we all have.

The quaint thing is that I’m the one that has to call Dell Customer Support to get it serviced. Nobody thinks that wasting my time with this stuff is pretty inefficient. sigh. Tho I have to say that Dell’s Customer Service isn’t bad. They are mailing me the part tomorrow.

Last week I also had to go down to the campus bookstore and return a malfunctioning Apple Wireless Keyboard. One mitten down, one mitten to go. Well, I thought I’d never be able to say this, but I think I may be able to have my very own Olympic glory, hmmm, maybe I’ll have to sing the Star-Spangled-Banner on Sunday to myself. I was pretty much thinking that I wouldn’t be able to make this silly goal that I’ve set for myself, but I might be able to do it! I have 3 days to finish the 2nd mitten, including 2 weekend days and now that I’ve finished the first one, the second should be a breeze. (I think).

We took Edda to school today and she did OK. There was a bit of screaming, but we did enjoy a bit of speech therapy, a bit of music lesson, snack time and then also occupational therapy time with Faye. They are very welcoming and say we can come and go whenever we’d like to.

Vince had a nice day too, I have to admit that since I’ve been so stressed, that we’ve used the computer as a Bob the Builder and Wiggles platform and we’ve all been well entertained and I’ve had a few small breaks to knit a mitten.

Here’s my post delayed a bit. Monday I biked from my house in San Jose, all the way out to Pescadero to this small bakery called the Archangeli Bakery. They always have some yummy artichoke bread like this one. This was the pesto artichoke bread that was partially cooked. I bought it and stuffed it into my jersey and rode all the way back home with a hump on my back.

I was pretty damn beat, but I popped it into the oven and it was nice, warm, crispy. Heavenly! I ate the whole thing.

I haven’t biked since. ha

Randomly, Doris, did I ever leave a 50mm F1.4 lens with you guys? I find I’m missing it from my collection! doh! 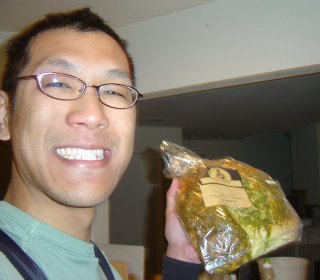