Well, went to Emilie and Ben’s Wedding on Sunday. It was a really realyl nice affair. They had it in Memorial Park in Pescadero, outside. It was a wonderful ceremony and I have to say, it’s the wedding that I think would be the closest to how I would envision mine being. There was a good moment where they passed their rings around to everyone in the audience to “bless” them. I thought it was a great way to involve everyone.

I drove one of Li Pei Jean’s friends from Palo Alto, Theresa Chang, who was married to the late Richard(?) Chang who was a classmate of Mom and Dad. Have you guys met her before? She sorta seemed to recall meeting you, tho it was hazy. Also, what year did you guys graduate from Tai Da? Anyways, we had a good time on the drive over and talked about a lot of things. She’s heavily involved in church, and actaully knows Pei-Sun, Choon’s wife, from a vocal choir that they both sing in. Small World. She of course, inviited me to church, which was expected. I think I managed to deftly manouver out of that one. 😛

Dinner was interesting also. I got put at the very last table in the list – table 22! haha. Table 22 happened to be the table of all the Mech E Tai Da alums. Everyone was sitting down, so when I arrived, all of them were wondering who the hell this young guy was. Some people knew right away that I was Dad’s son. They said I looked more like Dad than Mom. One friend, some dude with an eye patch – they never said their names of course – thought I was someone else’s son until everyone set them straight. Another guy, i think, has a daughter, Lorraine that lives in Oregon. I think we suposedly had dinner with her at MIT, but I don’t remember. They seemed keen on the idea of setting me up when Mom and Dad come in July. I also talked a long time to this guy, KT Wang, who sat next to me. He was from Chattanooga and came to retire in the Bay Area. We had a good talk, he mentioned how the young generation doesn’t like to listen to what the older generation has to say. I agreed for the most part, but I think it’s defnitely easier to talk to people who are not your parents.

When Li Pei Jean came around to do a toast, she made r obligatory speech of how was single and of how mom promised her 2000 bucks to set me up. She also mentioned how I was like a son to her, and honestly it was really touching.

The other thing that I found out was that Emilie and Ben had been dating for 10 years before being engaged, and 12 up until now. crazy! 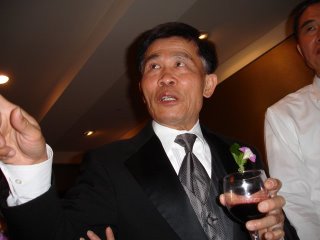 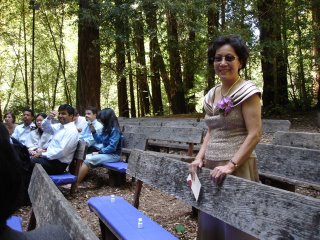 4 thoughts on “Emilie and Ben’s Wedding”