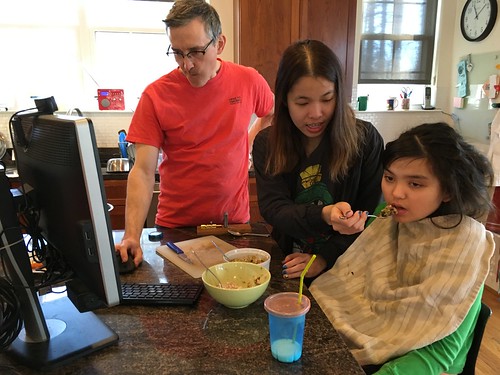 As our au pair experience winds down – we have about 6 weeks? 8 weeks? left, we are trying to put in place other childcare in place.  With the autism waiver, we are able to hire folks to hang out with Edda about 20 hours a week.  We were able to have Nat hired by the autism waiver provider and she worked a few hours on Sunday.  Ideally, we’d love to have three or four people in our regular rotation who know Edda, so we can have backup and backup for the backup.  Having live-in care has spoiled us for sure, we’ve been able to manage sick days, half days, random off days, snow days and Jeremy’s travel and my clinical rotations with ease.  Now everything will involve off-site after school care which runs more on a regular school schedule, so these bumps in the school year need to be planned out more in advance.   Vince is also growing up, so we are going to start asking him to help out with Edda’s care, which he’s already offered.  It’s tricky – asking Vince to care for Edda. 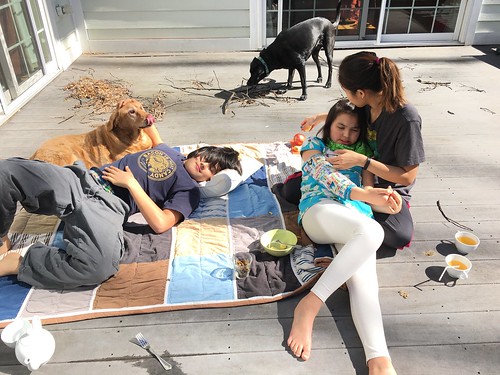 It was an incredibly beautiful day, everyone hung out on the porch and had a tea party. 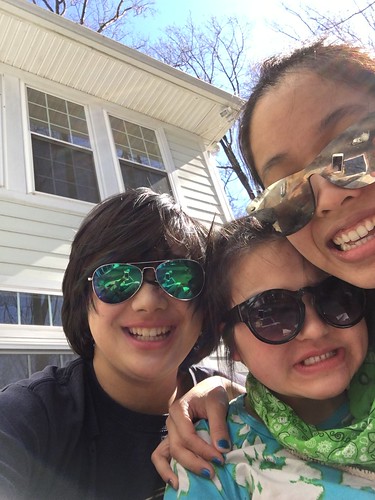 Vince took lots of photos and videos.  I don’t really like handing him my phone because he loads it up with 10,000 images.

I loved this spoof:

I spent almost all weekend to prepare our 2015 tax returns.

Too bad. We owe Uncle Sam a lot, even though we have already paid a lot. The next step is to find some extra $$$ by April 18th (Monday) of this year to pay what we owe 🙂

I would like to have flat-rate-tax with different paying levels and with no deductions at all.  This is not only simpler but, more importantly, it is fairer.

In my opinion, Marco Rubio is the worst one among all these presidential candidates, republican or democrat, religious or not, black or white, rich or not so rich, on the right or on the left.

The way it is going, he probably will not win any States and, yet, he is thinking he is the best one to be the President.  And probably, somehow doing Republican Convention dealings to get him in.  He is asking for a huge freebie – a handout.  If he can’t win, just gets out.  I think Christie and Jeb are much better person than this guy.

Remember, he is one of those “gang of eight” to sponsor so called “Comprehensive Immigration Bill” to grant certain legal status for illegals and, right now, he is running away of his own bill as fast as can, just as President Obama said. Evidently, he has a big mouth and is a liar, a con man, not the other one.

The other day,  in the process of proving himself a common guy, he said he just paid off his own college loans. Right now, he is 44.  I wouldn’t elect a guy like him to run the country because he is too slow to payoff his own debts, not to mention ours.

Not only that, he cashed in a lot of his 401K savings.  It is a very bad move for the common people and, evidently, he is SPECIAL.  Why all the media and newspapers don’t report this in depth?  Because they are on the same king-size bed with a lot of milking to do, just continuously to fool those common people on the main street.  Or, people at Winnsboro, SC, an impoverish town. They are all part of the elites, representing one and/or being one. He is the last great hope for all these elites.

Every election time, the media would ask all candidates to present their plan’s specific.  And after all these years, yes, all candidates have one with details.  But, none gets actually done no matter who is in office.  I suspect the elites use this as their screening process to pick and choose their favorite front man, with no regard to what ordinary people on the street really need and, indeed, would like to have.

Today, I walked around my neighborhood and played basket ball briefly with these three neighborhood kids. Somewhere down the street is this cemetery.

Winnsboro, SC is a pretty run-down little town with not much employment, a hospital, a CVS, a McDonald’s, a KFC, a Pizza Hut, two Dollar Stores and numerous churches.  Of course, there are two Chinese restaurants.  I have been there.  But, my home cooking is simple and better for me.  It also has a BI-LO grocery store and another one called SO-LO 🙂

I just re-arranged my kitchen.  Show this to Mom 🙂 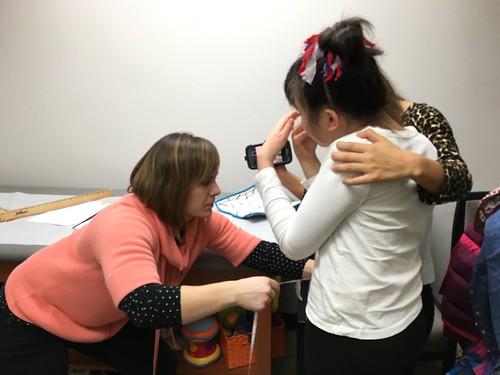 Keyla:  Edda’s a woman today!
Jeremy: I’d like to counter that statement with – she is no longer a little girl.
Vince: Mom, I really didn’t need to know that.
Mr. Twigg (Edda’s male teacher via text): Great!  Will you send in some extra pads?

I’m excited because I’m hoping it means that Edda is done growing – at 100 lbs and 4′ 10″, it’s enough mass and height for me to handle.  Although all the people in the know assure me that she has 2 more years of growing left.  Today, we had the appointment to fit Edda’s brace.  The orthesist (person who makes orthotics) was so fun and enthusiastic about the brace helping Edda.  She took about 30 measurements, it gets entered into a computer and the brace is spit out.  We’ll get it in a few weeks. 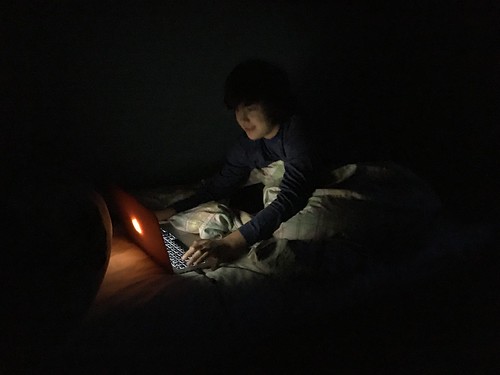 Don’t stay up too late.  See you on the other side. 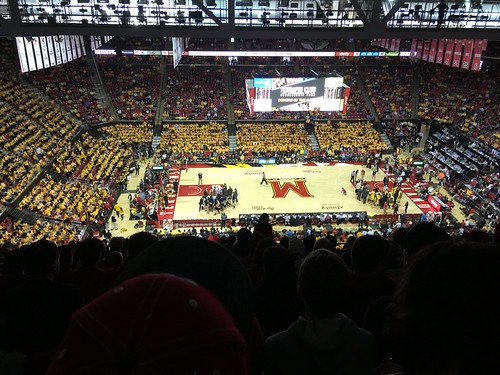 Vickey had an extra ticket to the Maryland vs Michigan basketball game today and invited me to go with them.  Maryland is doing well, so the stadium was hopping!  Packed, enthusiastic crowd – students all dressed up and cheering.  I wish I knew more about basketball to really appreciate what I was seeing.  Go Terps!

My working area is in Picture 1.  A brand new table with a chair.  My sleeping bedroom is in next picture.  I don’t need a bed which causes me a lot of problems with my back.  And my dinning area also with brand new table and two chairs as one can see in the last picture.

Today, I started working on my passport renewal for our upcoming trip to Machu Picchu in October.  Time really goes by quickly.  I have hold my passport for almost ten years.

I was locked out today because the old lock suddenly came back to life – popped open to lock the door inside.  I had to call my landlord and he made a special trip back home.  Really sorry for that.  But, he was pretty excited today and told me he just bought another house nearby.

Time to be landlord.  Hopefully, he can rent all his houses out to those people working in the new nuclear plant.  Besides that, nothing happens here.  No new employment here in Winnsboro, SC. 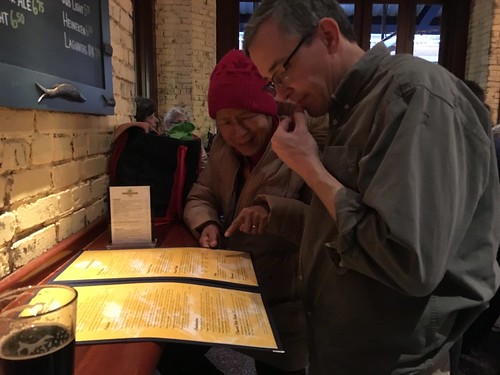 Clinical for me ended early (surprise!) so I was able to pick Mom up at BWI mid-afternoon.  Vince is off somewhere camping, so the rest of us headed to Coastal Flats, a new eater near the Target in Gaithersburg.  This is a new “neighborhood” that has just sprung up with restaurants, bars, fancy gyms etc, topped with high-end apartments and then condos or single family houses that ring around the center of the “town”.

We thought we’d beat the crowd by getting there at 5:30 pm, but alas, we did not.  We waited about 45 minutes to get seated – I’m not even sure the last time I waited in line for a restaurant!  But I had a lot of fun, I’m not often out in a crowded place having a drink on Saturday night.  Here’s Edda having a sip of my cocktail – I was waiting for her to make yucky face but it didn’t happen.  Yelp told us that the service was excellent and warm and I give props to our waitress for asking Edda directly what sides / drinks she wanted even though we kept answering for her.  Thumbs up! 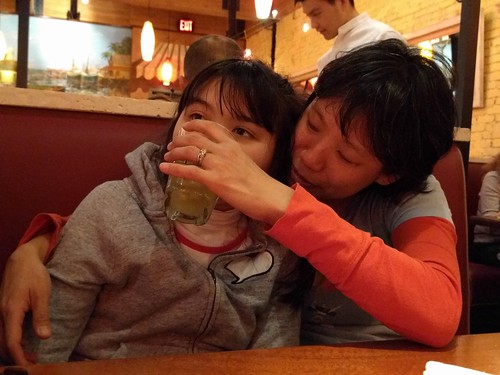 Here she is totally drunk.  No that’s not true.  Here she is wiping her greasy lips on my shirt sleeves. 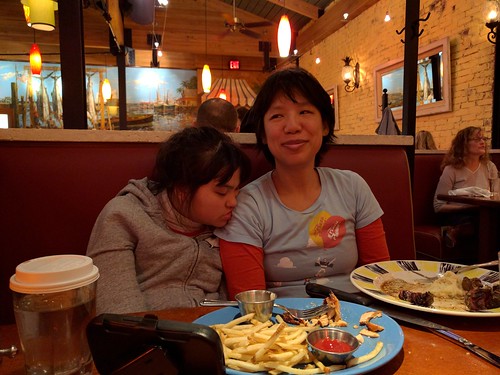